Criticism, compassion and one last win for Homeboykris 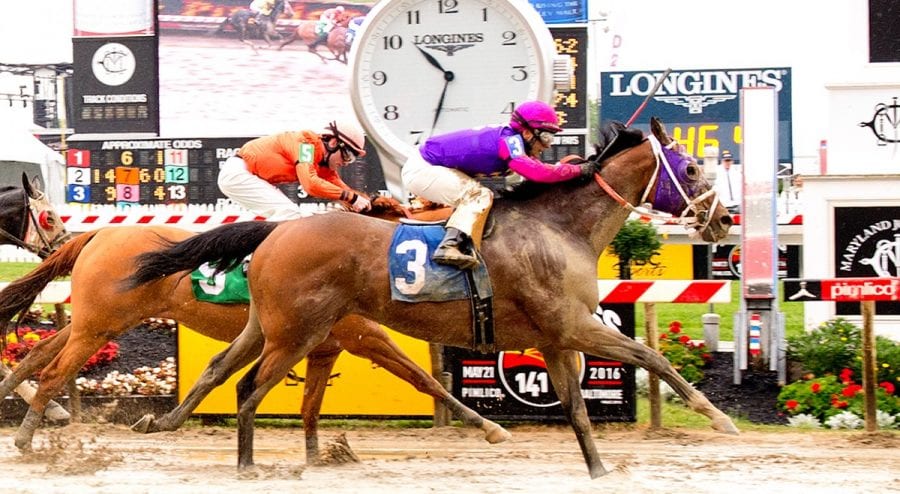 Homeboykris won the final race of his career, the first at Pimlico on Preakness day. Photo by Jim McCue, Maryland Jockey Club.

On the morning of May 21, Jan Klein was sitting in a suite at Gulfstream Park. A regular at the South Florida racetrack, she settled in to watch the first from Pimlico on Preakness day.

Six months earlier, Klein had claimed her first racehorse. She’d grown up riding and showing horses, and she’s long traveled to Saratoga in the summer, but in her mid-70s, she’d never owned a racehorse. That changed last December.

“I was watching TVG—I watch pretty regularly—and Homeboykris was running at Laurel in a $5,000 claimer. I’d seen him run a few times,” she said this week, speaking by phone as she drove to her office, “and one of the announcers said, ‘Somebody should give him a good home. He’s made a lot of money for people.’

“That touched me,” she said, “and I said to myself, ‘No one is ever going to run him in a claimer ever again.’”

Homeboykris was eight years old. It had been a long time since the 2009 Champagne winner had run in a stakes race, and he’d been claimed eight times when Klein saw him run in that November race.

At the recommendation of a friend, she contacted Francis Campitelli, who agreed to claim the horse for her. Though Klein planned to retire him, the bay gelding was in such good shape that she decided to keep him racing, with the stipulation that he never be entered in a claiming race.

“Frannie said, ‘He’s incredible. His legs are a like a 3-year-old,’” Klein related. “He was so spirited and so willing to whatever you wanted him to.”

Homeboykris’ performance on the track bore out those initial impressions. Running in starter allowance company, he won twice in four starts for Klein, including that race on May 21, which she watched with Campitelli’s wife Jessie.

“We were just screaming, jumping up and down, when he came down the stretch,” said Klein, who works as a financial advisor. “He looked that other horse in the eye and said, ‘Not today, buddy. This is my race.’”

Jessica Campitelli left to get a horse ready to run at Gulfstream, and then Klein’s phone rang. It was Frannie Campitelli.

“’I have some horrible news,’ he said. I stiffened, and then he told me,” said Klein. “He was crying and he said, ‘I can’t talk because I’m crying so hard. I’ll call you later.’ I became hysterical.”

The news, of course, was that Homeboykris had collapsed and died after getting his picture taken in the winner’s circle, news that spread like a virus across the country that day with dozens of media outlets picking up the story and sending out alerts.

Frannie Campitelli was worried that Klein was all alone at Gulfstream. Back at Pimlico, his son Chris was working the gate crew and, after he posted about his family’s sorrow on social media, he might have wished for solitude, given some of the responses he received.

@CampoTres @BigOShow 9 year old pushed over his limit.
Run to death .interesting to read necropsy as what meds in blood stream.

@CampoTres Really? What accident? Was a nine year old fit to run the Preakness? That boy ran his heart out literally. That’s on you.

“I like Twitter,” said Chris. “It’s a good resource, and I like to be transparent about things that go on at the track, both good and bad. I posted about him because he’s a fan favorite on Twitter, and I wanted people to know that he’d been competitive and that the owner wouldn’t let him be claimed.

“And then people accuse you of being a horrible person, of being complicit in the horse’s death, and most of them weren’t even educated about the conditions or how he even died.”

“It’s amazing how much attention it got,” said Frannie, sounding a little shell-shocked, even a couple of weeks later, about both the horse’s death and the response to it.

“He was a big happy horse that loved to train,” he said. “He’d walk out on the track in the morning and stand there for 10 or 15 minutes, taking it all in in. Our barn at Pimlico is the first one when you drive in, and he’d stand at the front of his stall, checking things out all day long.”

Homeboykris’ body was sent to the Maryland Department of Agriculture for a necropsy, standard procedure under the circumstances, and while the report won’t be released until after next month’s Maryland Racing Commission meeting, Frannie said that he had seen it and that it determined, as he’d suspected, that the horse had died of a heart attack.

“It noted how good his health was for his age,” he said. “It’s a sad but good ending for him. It’s better than having him get hurt and suffer.”

Klein never stood in the winner’s circle with Homeboykris; she’d had a ticket booked to come to Maryland the week after the Preakness to meet in person for the first time the horse she’d claimed to make sure he would have a good retirement.

But on the day after the Preakness, she was standing in the winner’s circle at Gulfstream Park with Temple Fur, a three-year-old filly she purchased privately this spring that got her second win in as many starts for her new owner that day. And at the most recent Fasig-Tipton sale in Maryland, Klein, who races in the name of Stirrup Trouble, purchased another Temple City filly, this one a 2-year-old.

She has no regrets, she says, about continuing to race Homeboykris.

“I said to Frannie, ‘You gave him back his dignity and you gave him love.’ He’d never again be thought of as a cheap claimer,” she said.

And she hopes that, while this story had a sad ending, it will help to bring attention to what she sees as the problem of horses running for a tag after amassing significant earnings for other owners.

“People have to treat horses with respect and kindness, and the way they treat these claiming horses is just heartbreaking to me,” she said.

“I’m a business person,” she continued. “I get it. But I also don’t get it. What about compassion for the animal?”