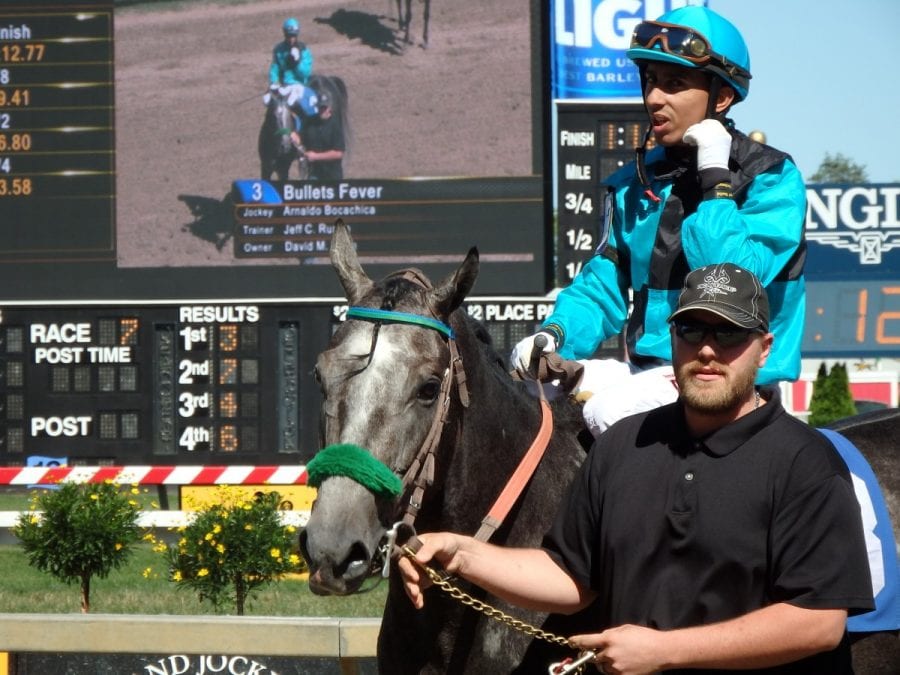 
Bullets Fever’s Beyer speed figures didn’t match up particularly well with those of his six rivals in this afternoon’s featured allowance test at Pimlico Race Course.

But his record coming into the event — a perfect five wins in five tries — certainly did.

Make that, now, six wins in six tries for the West Virginia-bred.

Bullets Fever jetted to his accustomed spot at the head of the field early, led through the early fractions, opened up in the stretch, and then had enough to hold off the closers and post a neck victory over Demon Buster and favored Cooking Up a Storm.

“We wanted to see what this colt was made of,” said winning trainer Jeff Runco.

It was Bullets Fever’s second win outside of his Charles Town base and first outside of West Virginia.  He already owns win in three stakes, the Vincent Moscarelli Breeders Classic, the Tri-State Futurity, and the Coin Collector.

“He doesn’t need to stay at CT,” said Runco.  “It was a great purse here today, so we wanted to give Maryland a chance, and ti worked out great.”

Bullets Fever, a three-year-old colt, certainly was bred to be a runner.  By Fiber Sonde, he is out of the stakes-placed Indian Charlie mare Ghost Canyon.  Bullets Fever’s full brother, Hidden Canyon, has nine wins from 14 career starts, with a pair of stakes wins and $313,695 in earnings.  He was bred by John McKee and is owned by David Raim.

Runco said he did not have a set plan for his charge but indicated that a return engagement in the West Virginia Breeders Classics — at which he won the Vincent Moscarelli last fall — was the longer range goal.  “We’ll see how he comes out of it and give him some time,” Runco said.