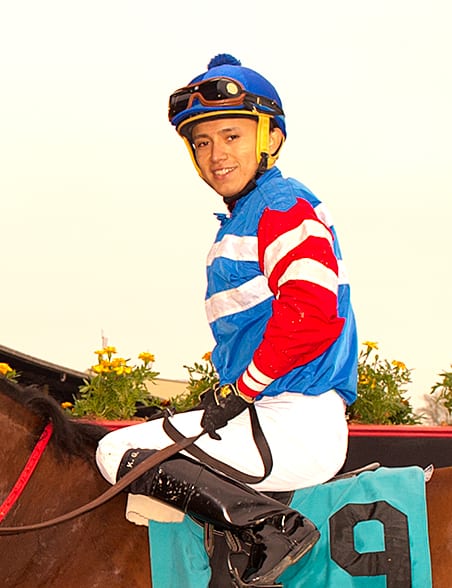 For apprentice jockeys, this time of the year is much akin to baseball’s spring training. Many young riders begin their careers during the winter, and veteran agents and advisors usually start their pupils off slowly, riding longer-priced horses while they gain experience and begin to learn and perfect the skills that make a solid, well-rounded rider.

And much like young horses and fledging baseball prospects, this is the time of year when young riders with talent often seem to blossom.

Take the case of Kevin Gomez.

The 22 year-old native of Guatemala came to this country in 2007 at age 13 to be with father Oscar Gomez. The elder Gomez is an accomplished reinsman who has ranked among the leaders of the Finger Lakes riding colony for a number of years. He finished fifth in the standings at that track in 2015 with 101 wins and was third overall in 2014 when he captured 104 races.

Kevin began working at the track soon after his arrival, and in 2011, when he was 17, his career took a step forward when he went to work for Christine Attwood. Atwood, a veteran trainer from the Finger Lakes area, took Gomez under her wing and began teaching the youngster the finer points of dealing with thoroughbreds from the ground up.

“She (Atwood) really taught me how to learn from horses, and how horses have ways of communicating with you,” Gomez said recently. “She showed me how to look for the little things that might indicate a problem like mood changes in a particular horse. It was like going to school and she was my professor.”

After a short stint at the major New York Racing Association (NYRA) tracks, Gomez asked a friend for some advice regarding his career.

“My friend told me I needed to go where I could get on horses, ride horses and gain experience and he put me in touch with agent Tom Stift,” Gomez explained. “I got to Maryland In December and started getting on horses in the morning right away. Tom (Stift) told me if I had a good work ethic and did my part in the morning, I’d ride horses and get the experience I needed.”

Like most young riders just getting started, Gomez was a work in progress when he began riding at Laurel Park this past December, but as time went on he began to polish his skills. In the past several weeks, observers have noted the apprentice is beginning to show more and more poise during the running of races, sitting “chilly” with little movement during the heat of competition, and they have also noticed he is displaying more strength and drive through the stretch.

Gomez is riding all around the region and has had mounts in recent days at Delaware Park, Pimlico, and Penn National.  He is scheduled to ride three on Saturday at Delaware.

Gomez admit he still has a lot to learn and says he has had a lot of help and advice since coming here. “Victor Carrasco and Alex Cintron have been very helpful at showing me what I do wrong or pointing out how to handle different situations, and Omar Klinger, who used to ride, has also been working with me,” Gomez explained. “And my valet, Ezequiel Rolon, has really done a lot for me since I’ve been here. I respect him like a father.”

Trainer Claudio Gonzalez has been one of a number of trainers who have been riding Gomez more and more of late, and the trainer and jockey teamed up to win a pair of races at Pimlico on May 12 with Royal Caviar and Willful Limit. Gonzalez says he feels the young apprentice not only has the right tools but also the right personality to be a success.

“He works very hard, he’s at the barn every morning, and he’s a very nice young man,” Gonzalez observed. “But one thing that has impressed me more than anything else is he asks questions and he listens when someone’s telling him something. You know a lot of riders will act like they’re paying attention to what you have to say when their mind’s a million miles away.

“Kevin really listens carefully and he digests what he hears. He really wants to improve and get better. And he’s getting better and better steadily,” Gonzalez concluded, “He’s made a lot of progress since he came here back in the winter. I’d say from what I’ve seen he’s the best apprentice around here right now.”