Lady Shipman sails to easy win in The Very One 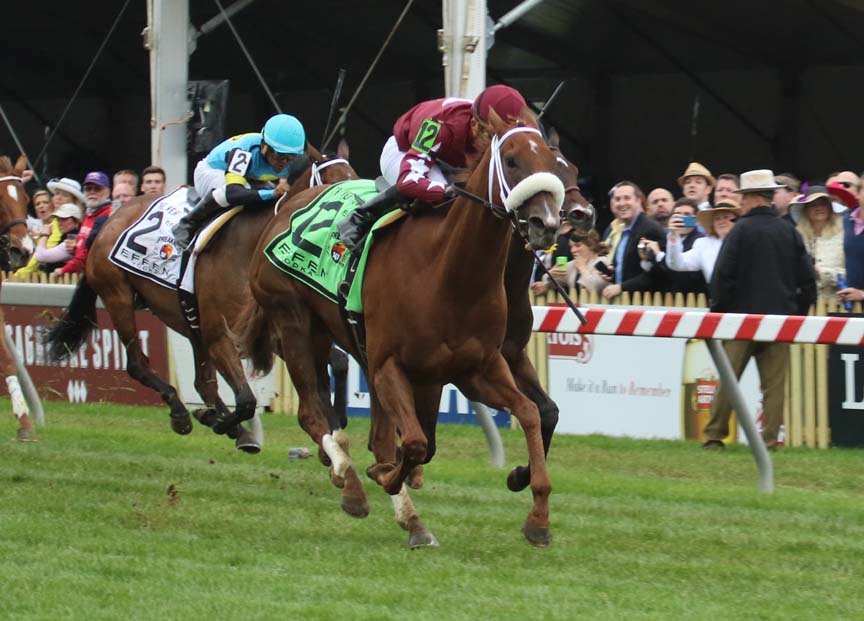 Ranlo Investments’ well-traveled multiple-stakes winner Lady Shipman made a triumphant return to Maryland with a commanding 2 ¼-length victory in the $100,000 The Very One Saturday at Pimlico Race Course.

“She’s a star, Lady Shipman,” said her trainer, Kiaran McLaughlin.  “She does everything right and just keeps winning.”

Heavily favored at 2-5 and carrying co-highweight of 122 pounds in a field of 12 fillies and mares, Lady Shipman ($2.80) rated behind front-running Everything Lovely after breaking from the far outside, took over the lead turning for home and sprinted clear to win in 57.85 seconds for five furlongs on a turf course rated good.

It was the 11th win from 15 lifetime starts and ninth stakes victory at six racetracks for Lady Shipman, who improved to 5-0 at the distance including a triumph in the Stormy Blues Stakes last April, her only previous trip at Pimlico.  She also was second a neck in last fall’s Breeders’ Cup Turf Sprint against males.

Lady Shipman has now won three of four starts this year and two straight since running seventh as the favorite in the Al Quoz Sprint (G1) against males March 26 in Dubai, the only off-the-board finish of her career.

“She broke just a little bit slow because she was way on the outside,” recounted winning rider Joel Rosario.  “I sent her a little bit, and she covered a lot of ground really quickly. And she kept going from there. The more that I asked her, turning for home, the more I asked her, the more she was giving to me.”

Runner-up behind Ageless’ track record-setting performance in last year’s The Very One, Joya Royal closed late to finish a head in front of Exaggerated for second.