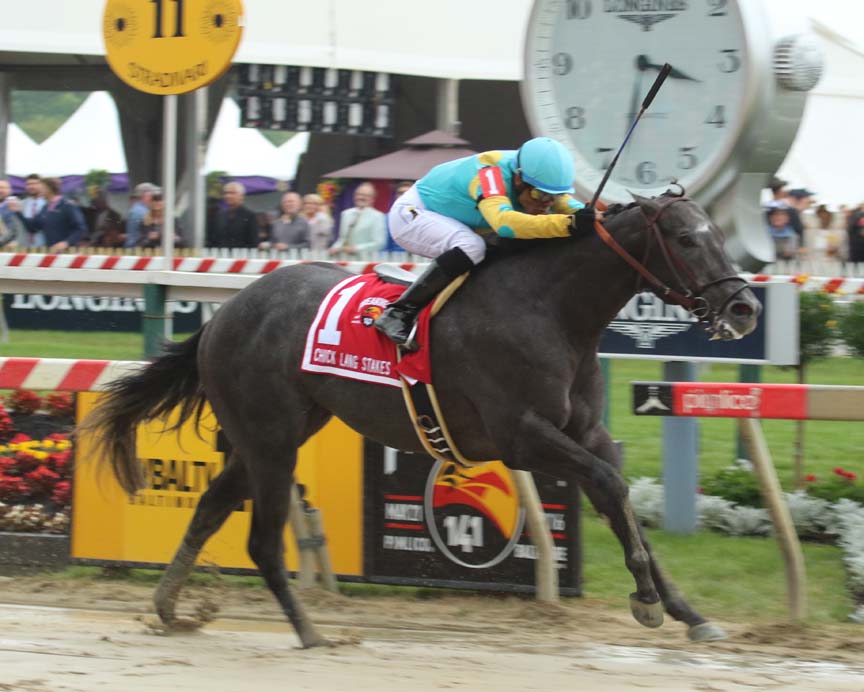 Zayat Stables’ Justin Squared kept his perfect record intact with a gate-to-wire, two-length victory in the seventh running of the $100,000 Chick Lang Stakes Saturday at Pimlico Race Course and now has three wins from three starts.

Trained by Hall of Famer Bob Baffert for Zayat Stables, who teamed up to win the 140th Preakness Stakes (G1) with American Pharoah en route to the 2015 Triple Crown, 4-5 favorite Justin Squared ($3.60) ran six furlongs in 1:11.41 over a muddy main track after a brief early scare.

“When he broke left out of the gate, I’m like, ‘No, no,’” said rider Martin Pedroza.  “He may have even skimmed the rail a bit. After he straightened out, I had a good hold on him the whole way. He is very versatile and can go longer, too. He had unbelievable speed and reminds me of Private Zone.”

It was the third victory in as many starts, all in front-running fashion for Justin Squared, a speedy son of Grade 1-winning sprinter Zensational, who debuted with a 5 ½-length maiden victory last fall at Del Mar. This year, he won a six-furlong optional claiming allowance April 21 at Los Alamitos.

Counterforce rallied from last to finish second, two lengths ahead of 45-1 long shot Formal Summation. Fourth-place finisher Big Louie D was disqualified for interference on the far turn and placed last of seven.