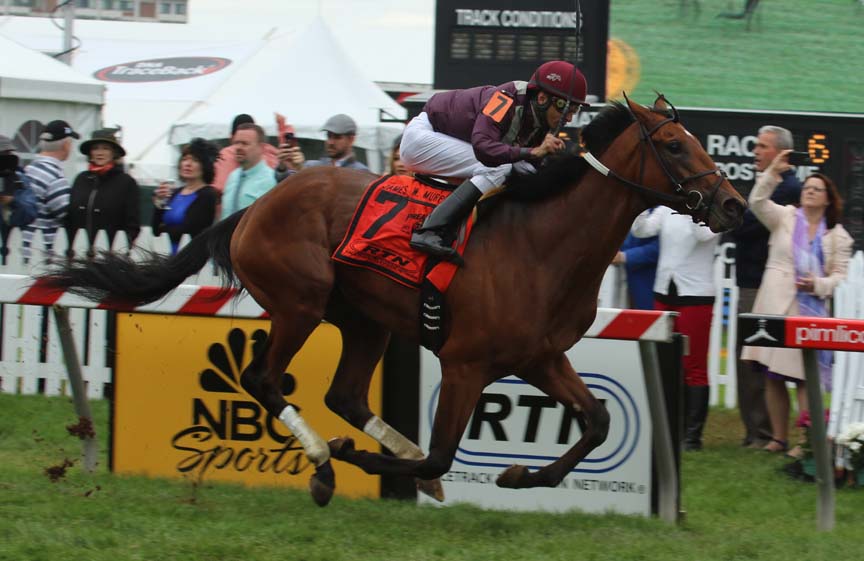 Back on turf for the first time since last fall, Harry and Tom Meyerhoff LLC’s Marengo Road opened up in the stretch and held off late-running Aquaphobia for a 1 ¼-length triumph in the seventh running of the $100,000 James W. Murphy Stakes.

Ridden by Julien Pimentel for trainer Mike Trombetta, Marengo Road ($33.80) sat within striking distance of pacesetting Ousby through six furlongs before separating from his rivals after turning for home, running one mile in 1:39.04 over a turf course rated good.

Marengo Road is now a two-time stake winner, and a two-time winner on both turf and dirt.

“He runs well on all surfaces, although I may keep him on the grass after this performance,” said trainer Michael Trombetta of his Fair Hill-based charge.  “After he won the Miracle Wood [in February at Laurel Park], he got sick two days before the next race we planned to run him in. At Laurel last fall, we weren’t able to get a race after the close of the turf, so we tried him in the Private Terms. I don’t have a plan for him, but like I said I will likely try to keep him on the turf.”

That seems like a wise decision after a nice win against a solid group.

Favored at 5-2 in a field of nine 3-year-olds, Aquaphobia closed fast on the far outside for second, 2 ½ lengths in front of Conquest Windycity.

Marengo Road, a son of Quality Road, became a stakes winner on multiple surfaces in the James Murphy, having captured the Miracle Wood Stakes over Laurel Park’s main track Feb. 15. Fourth in the Private Terms to 141st Preakness Stakes (G1) entrant Abiding Star, he missed a scheduled start in the Federico Tesio Stakes April 9 with a fever.

In his previous tries on grass, he was second in a 7 ½-furlong maiden event last summer at Delaware Park before graduating with a 1 ¾-length triumph going one mile Sept. 20 at Laurel.