Harrison Johnson’s family to gather — race or no race 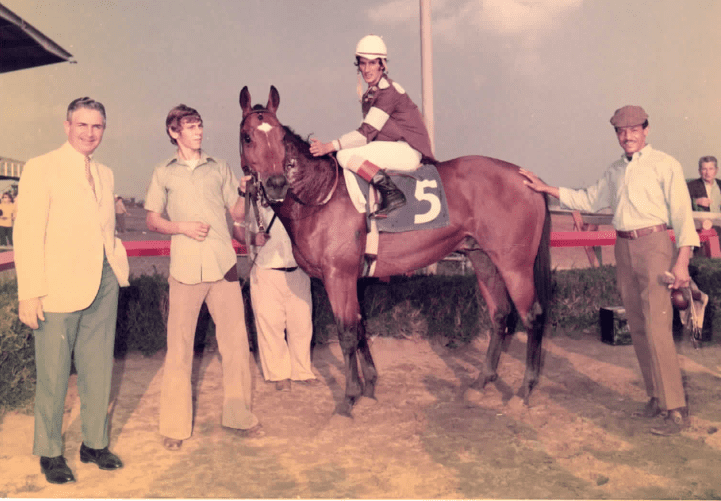 Although the 2016 edition of the Harrison Johnson Memorial Stakes will not be carded as scheduled this Saturday afternoon and will not be rescheduled at a later date, the family and friends of the late trainer are still moving forward with their annual reunion at Laurel Park this weekend.

Johnson, who trained from 1969 until his death, in a plane crash, in 1985, saddled 128 winners from 1,362 starters in the decade before her perished. He perhaps is best remembered by his peers and racing fans as the conditioner of Gusty O’Shay, winner of the Grade 1 Hopeful Stakes at Saratoga Race Course in 1973.

But Johnson is remembered as much more by his two sons, Gene Johnson, 50, and Keith Johnson, 43, who have yet to miss a reunion that typically evolved around the stakes race named in honor of their father.

“My dad always loved the horses and we could tell when he had a winner,” said Gene Johnson. “When he won a race he would come from the track smiling and he would tell us to get ready to go out for dinner. He loved flying his plane as well. He and his friends and business partners would always fly up to Saratoga for the races and the sales. He actually died flying back from Saratoga. The investigators said he landed short of the runway and landed in the woods.”

Laurel Park offered the first Harrison Johnson Memorial Stakes for older horses in 1986, one year after the trainer perished in the plane crash, with Sparrowvon winning the inaugural running of the event for fellow African-American trainer, Hank Allen. Later editions of the Harrison Johnson were won by local stalwarts such as Due North [1990 & 91], Sweetnorthernsaint [2007], Eightofastocatch [2011-12] and Page McKenney last year. Page McKenney was eventually named the Maryland-based horse of the year by the Maryland Racing Media Association and he recently captured the Grade 3, $250,000 General George Stakes.

But this year’s scheduled edition of the Harrison Johnson Memorial did not garner enough entries to be contested, and Laurel Park Stakes Coordinator Coley Blind confirmed on Thursday that the race would not be rescheduled. The Johnsons, however, are still planning to have a “Family and Friends of Harrison Johnson” race midway through the card on Saturday, and they have already reserved ample space in the Brass Horse section of the Laurel Park dining room.

“We just heard that the race was not going to happen, but the event is still on,” said Gene Johnson, who credits aunt Edwina Mason for getting the tradition started. “This is the first time since my dad passed away that they are not having the race. But we’re still planning to have a race on the card, and we’ll have family and friends coming in from all over to spend the day together and share memories of my dad. We’ve always had a separate race on the card for our group, so really not much is going to be different other than the stakes race is not going to happen.”

Harrison Johnson saddled his first winner in 1970 and then recorded at least 10 victories each year from 1978-84, with a career high of 19 victories in 1981. Horses he trained earned over $1.15 million along the way, with his best season in that category being 1983 when his runners banked over $215,000. But until the day he tragically perished in a plane that he was piloting up through each of the previous editions of the memorial race named in his honor, Harrison Johnson was forever linked with Gusty O’Shay.

As a two-year-old in 1973, Gusty O’Shay won four of nine races and earned over $64,000. The Maryland-bred son of Rose Argent, bred by Mrs. G.T. Hopkins and owned by her in partnership with Lola Peters, followed a second-place finish in the Grade 2 Saratoga Special with a victory in the Grade 1 Hopeful. That victory put Gusty O’Shay and Johnson on a list with racing’s genuine elite, especially among the juveniles that have won the Hopeful before and since.

Although Gusty O’Shay was named champion Maryland-bred two-year-old colt in 1973, he did not follow closely in the footsteps of those past legendary Hopeful winners. He won only once in four starts at age three, but scored three times in seven tries at age four and eventually ended his career with a 9-4-1 slate and earnings of nearly $85,000 from 28 starts. But, like his trainer his legacy has lived on over the years and gets joyously recalled at least one Saturday in March each year.

“My dad trained a lot of horses, but everyone always remembers Gusty O’Shay,” Gene Johnson said. “It was a really big deal to win the Hopeful Stakes at Saratoga. My dad loved flying up there. After he won that race, he was so excited. I was still too young to go the race track back then, but I still remember how happy he was after Gusty O’Shay won. Needless to say, we all miss him and this Saturday all of his friends and family can gather together and talk about all of the good times that we had together.”