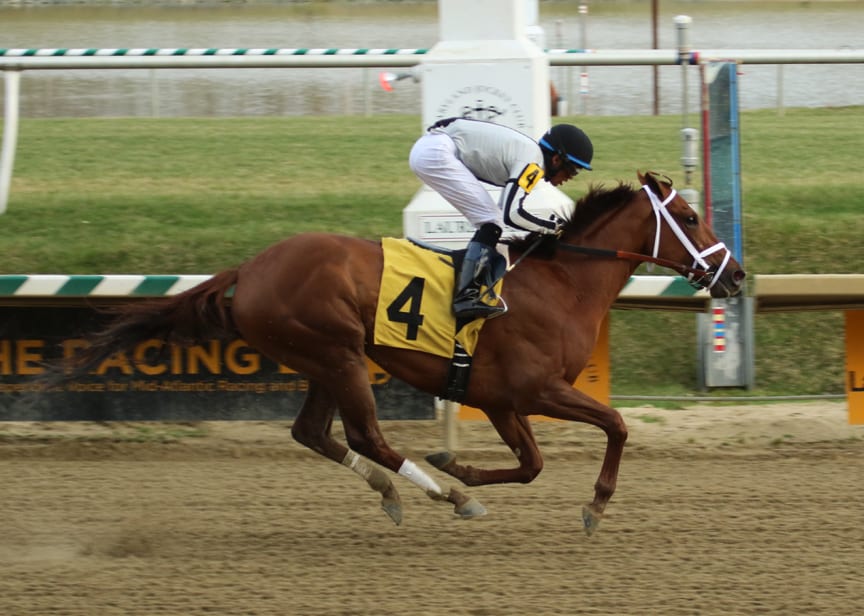 There was no question Sophia’s Song had talent.

And today she put it all together in romping to a four-length victory in the $75,000 Caesar’s Wish Stakes at Laurel Park.  Sophia’s Song paid $2.60 as the overwhelming 3-10 favorite in the compact field of six.

“She was able to get out to a comfortable lead without much pressure,” said winning trainer Todd Pletcher from his Florida base.  “She still tends to drift a bit in the stretch and that’s something we’re working on, but I thought it was a solid effort.”

Sophia’s Song broke alertly and zipped straight to the lead with Prognosis and Wide Country winner Great Soul in closest attendance.  Sophia’s Song led the field through a quarter-mile in 24.48 seconds and a half in 48.07.

“I think the way the race unfolded, she kind of found herself on the lead and we didn’t want to take way what comes naturally for her,” said Pletcher.  “All in all we’re very happy with her performance.”

Rounding the turn, Victor Carrasco, aboard Sophia’s Song, took a couple of peeks between his legs.  He found no nearby competition.

Great Soul, the second choice, chased gamely most of the way and held second, just a nose ahead of In the Navy Now, who rallied smartly for the show after having trailed the field by a wide margin in the early going.

Sophia’s Song covered the one-turn mile distance in 1:38.40.  She now owns three wins from four starts, and the winner’s share pushed her career earnings to an inch shy of $100,000.

All in all, it was a pretty nice dividend for Mathis Stable LLC, which purchased a controlling interest in the daughter of Bellamy Road following her six length win against Gulfstream allowance rivals on December 30.

“[Pletcher] told us the horse had a tremendous amount of talent” before they purchased her, explained owner Bill Mathis.  “He was ready today to see what she could do.”

Mathis was surrounded in the winner’s circle this afternoon by members of his family, among them his young daughter Sophia.  Though young Sophia was not the inspiration for this horse’s name, she was for another “Sophia” horse of some note: My Miss Sophia, who won the Grade 2 Gazelle in 2014 and ran second, to Untapable, in the Grade 1 Kentucky Oaks.

This horse obviously has a ways to go before reaching those lofty goals.  But that’s the direction in which Mathis was thinking.

“Clearly, there’s a lot of choices when you’ve got a three-year-old filly right now,” he said.  “We were fortunate enough to have My Miss Sophia run second in the Oaks to Untapable.  But we’ll let Todd figure that out, but we’re glad to get a stakes win for her.”