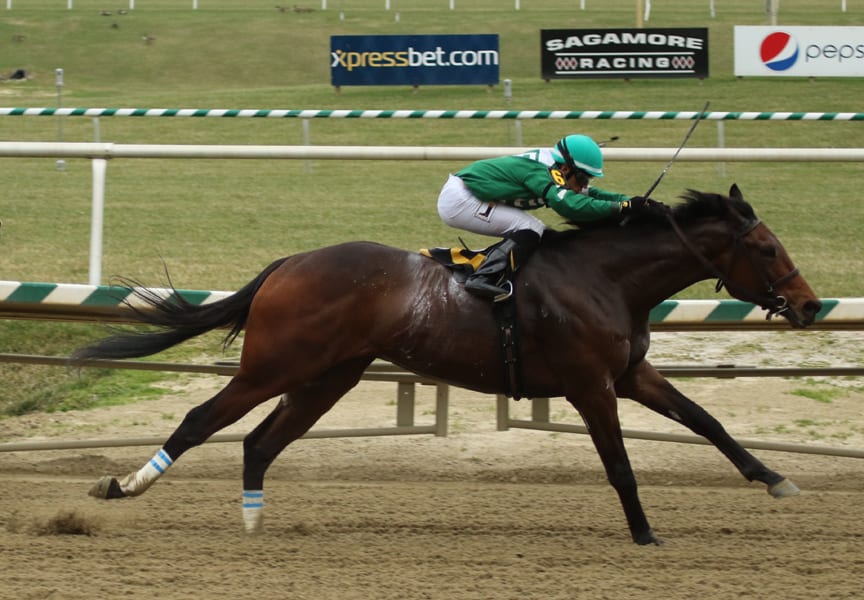 Owned by Stonehedge LLC and trained by Edward Allard, Abiding Star broke on top in the 1 1/16 mile Private Terms and never looked back under jockey Jevian Toledo, winning by 1 ½ lengths over Flash McCaul at Laurel Park. Whiskey Tree was third and favored Marengo Road was fourth in the six-horse field.

A son of Uncle Mo, Abiding Star has been a work in progress. The colt has won his last three starts after breaking his maiden in his seventh attempt for a $40,000 claiming tag Jan. 1 at Laurel.

“He’s just maturing…coming into himself,” said Allard’s wife and assistant trainer Mary Allard. “Typically, 3-year-old colts, they’re not always real smart. Sometimes they need more time to get themselves together. And he’s getting things together.

Breaking from the six post, Toledo simply took Abiding Star to the front in front of Whiskey Tree and cruised through fractions of :24.89, :49.66 and 1:15.02. The colt had a three-length lead entering the stretch before coming home in 1:46.61. Flash McCaul rallied around the far turn for the place.

“We thought if he made the lead and kept it at a nice, decent pace, we thought he’d get the job done,” Allard said.

Allard said there were no firm plans for Abiding Star, but a late nomination for the Triple Crown and possibly returning to Laurel for the April 9 Federico Tesio, a “Win & You’re In” for the May 21 Preakness Stakes (G1), were all possibilities.

The Private Terms is named after Locust Hill Farm’s son of Private Account, trained by Charles Hadry, who won the 1988 Tesio (G3), Gotham (G2) and Wood Memorial (G1) before finishing ninth in the Kentucky Derby (G1) and fourth in the Preakness (G1).