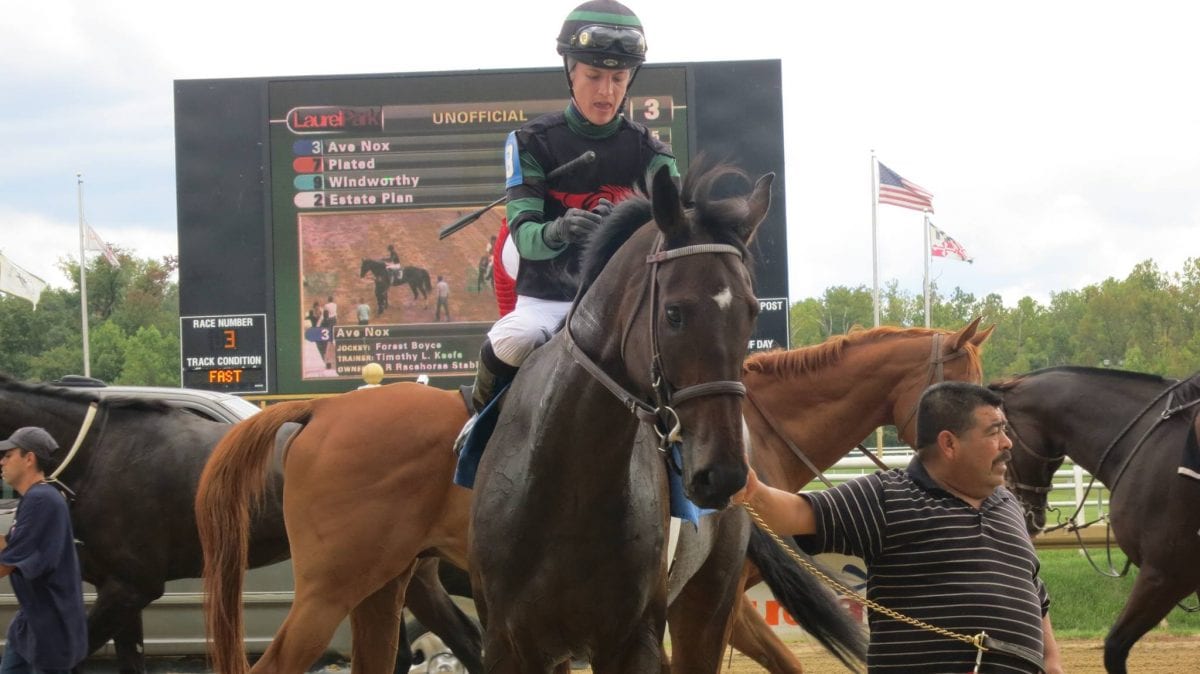 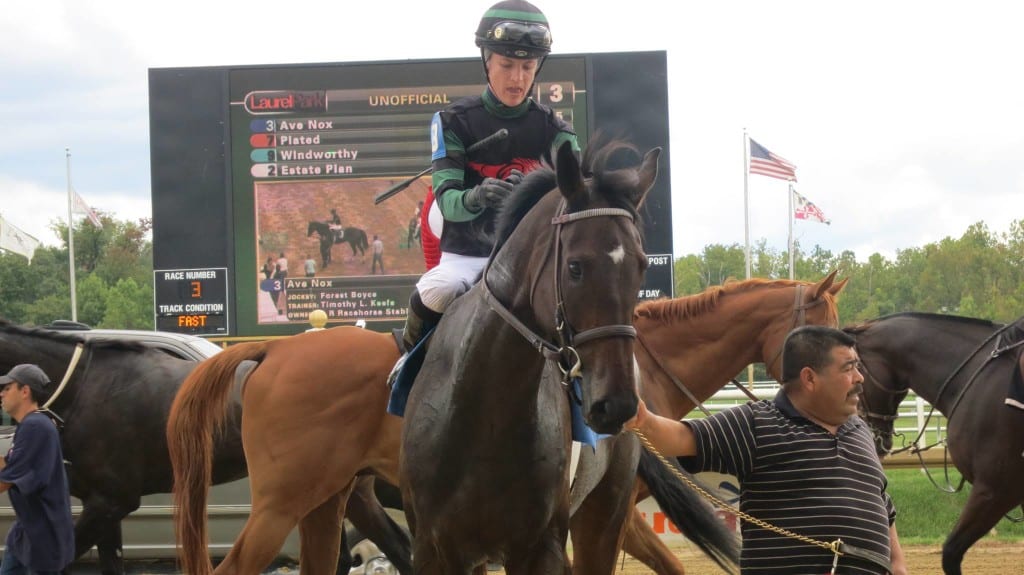 A year and a half ago, our horse Ave Nox raced on opening day Saratoga 2014. We had the privilege of Edgar Prado taking the mount. It was a 1 3/8th mile race, and Ave Nox was cruising nicely – then just after the final turn, rating well and holding 3rd position, he stopped running and drifted back behind the field.

I was the first to get to the track, and Edgar pulled up to me and said, “He started whistling loudly like a freight train in the final turn. He was going so good, too.”

Back at the barn, and to our trainer’s horror, Ave Nox showed signs of bleeding. There was mucus coming out of his nostrils that had light pink froth to it — not rich red blood, but enough to cause concern. The veterinarian scoped him and said, “EIPH (exercise induced pulmonary hemorrhage) was not his problem. He has a paralyzed flap (one side of the larynx).”

Up to that time and like all of our entries, Ave Nox did not race with Lasix. I would not permit it because, in my mind, using Lasix was abusive to the horse.

Our trainer Kathy Dibben had accommodated our request to not race our horses on Lasix; likewise Tim Keefe had earlier graciously complied with our wishes, too.

We interviewed the top veterinary surgeons on the entire East Coast to decide where to send him to deal with the paralyzed flap. After careful consideration we chose Dr. Patty Hogan – not because she saved Kentucky Derby and Preakness winner Smarty Jones from losing his eye after a gate training incident, but because we liked her ideas about this particular surgery, post-surgical care, and how to bring Ave Nox back to training. Dr. Hogan did a masterful job.

Dr. Hogan was the only veterinarian to suggest that the best thing for Ave Nox was to start training lightly within just several weeks after surgery instead of several months. She had convincing arguments why, and I think she was correct. He never whistled again and never had a breathing issue of any kind afterwards.

Within eight weeks of surgery Ave Nox was full of himself and acted like he wanted to work. After Kathy eased him in, he worked well and with energy and enthusiasm. Eventually he fully healed from his surgery. He wasn’t putting on weight, but this was a minor concern: his attitude suggested he was ready to try again.

We entered him in a sprint for the first time just to get a work in. For a long route horse he actually managed to come in fifth with a nice stretch run. A month later we stretched him out to a mile, and then it came: he exhibited the signs of epistaxis, i.e., visible bleeding out of both nostrils.

Our trainer had always been cautious about running without Lasix because of terrible experiences she had had with two bleeders. At that point she took a stand: if we wanted to continue running him without Lasix, she said, we should find another trainer.

This brought us to a crossroads.

With Kathy, we feel that we found the most honest, most conscientious, most competent and most reliable horseman we have ever encountered. We had to confront the idea that there are good people in the sport who have nothing but the best interest of the horse in mind when using Lasix. We had to weigh the tradeoff: make an issue over the medication or jeopardize a relationship that was very important to us.

At that point we began some serious soul searching, re-examining our assumptions. Then I began reaching out to other people in racing, from folks fighting through the claiming ranks to Grade 1 and classic winners — many of them people I had sparred with on the issue of Lasix over the years. Yet to a person, they were gracious, forgiving and encouraging.

After Ave Nox bled we did as we had always planned: we gave him a long break at the farm. After several months we had to think really hard about bringing him back. In the meantime our first homebred, Mack the Knife, began training late in his two-year-old year. It was clear that he wouldn’t make it to the races before the end of the year, but when he started as a maiden three-year-old, we did what we never thought we would do: allow him to run on Lasix.

We chose to stay under the radar and keep it silent publicly while we waited and watched to see how this would go, and what we could learn from it. Eventually Ave Nox recovered to our satisfaction, and we decided to run him on Lasix, too.

For me personally, I remain ambivalent about the use of Lasix. There are some veterinarians who pose themselves as research scientists who have spurious arguments and questionable methodologies leading to erroneous conclusions. There are many patently false claims about the extent to which racehorses suffer EIPH and what the consequences are. There are claims by all sectors that are not supported by facts.

So my real issue has been the hysteria driving many arguments (to be fair, including my own) and misinformation about the subject that carries on to this day. From both sides: those who support the use of Lasix and those who are opposed. Lasix is neither panacea nor bane.

At the same time, I had been involved in efforts to encourage federal legislation to to better manage horse racing medication abuses. During that effort, an issue arose in which the connections of a horse took steps clearly designed to circumvent rules restricting the use of anti-inflammatory medications close to races. But, to my disappointment, the parties concerned with drug regulation didn’t care to discuss this obvious attempt to circumvent a rule.

It was this incident that first brought me to begin to consider that the Lasix issue really is a distraction from the real problems in racing.

And so it was that a few months later Ave Nox bled.

Ave Nox had other physical issues that I think were more of a contributing factor to his bleeding, i.e., it wasn’t simply EIPH: we had probably brought him back to racing too fast after surgery, and given how thin he was he probably could have used more time off.

The majority of my assumptions have not changed, but a few have.

One, the conclusion I came to was that if this drug is only used on race day and at low doses of 5cc or less, then how is it possible to abuse it? I couldn’t argue against this: even if I don’t like the use of it, it is unreasonable to accuse anyone of abuse. I couldn’t remain in denial about that.

Two, if there is any leaching of important minerals and potassium before the race, can that really lead to long-term musculoskeletal compromise? That also began to seem unreasonable.

And finally, many of my friends who want to eliminate the use of Lasix continue to do so for the sole reason of not giving an advantage to their competitors. This is critical; it is not really about the harm of medication abuse. If it were, then none in that camp would be able to defend themselves, as all of us in American racing have used Lasix. I could no longer ignore this fact.

The final thing I came to realize that needed confrontation and reflection was my own anger. I love horse racing. I love and continue to be inspired by the greatest athlete in the world: the Thoroughbred racehorse. I have come to respect and admire people whom I was clearly wrong about, and I have come to realize that my anger was the real problem.

My wife and I adopted the last three babies at Ernie Paragallo’s farm after the police raid in 2009. It was a sickening and sad situation that to my mind the horse racing industry was complicit in by way of willful ignorance and incompetence. It was evidence of how woefully inept and ineffective the Jockey Club really is; and it speaks to how relegating an issue of interstate commerce to the separate states is a recipe for disaster.

After years of watching horses break down over abuse; poor regulation, administration and accountability; and downright incompetence, I had had enough.

There is plenty to be angry about, but anger doesn’t solve problems. Listening, and understanding, and trying to find good people to do the right things — those things solve problems.

Don’t get me wrong. I still think most horses don’t need Lasix, and on certain days, I believe, its use cannot be justified

But I have concluded that the issue of Lasix really is a very minor issue. I remain ambivalent about its use, and am still amused at how silly some of the arguments supporting its use are; but I can no longer deny that many good people have sound reasons and good cause to continue using it.

The biggest lesson I have learned is that if you are lucky enough to find the right trainer, a trainer of honesty, integrity, and competence, where most everything seems to fit right, the best thing to do is let go and let that trainer do their job.

Sean and Angelika Kerr reside in New York City. They have been breeding and racing Thoroughbreds in New York, Maryland and Pennsylvania for nine years.