Bill would revitalize the DC International 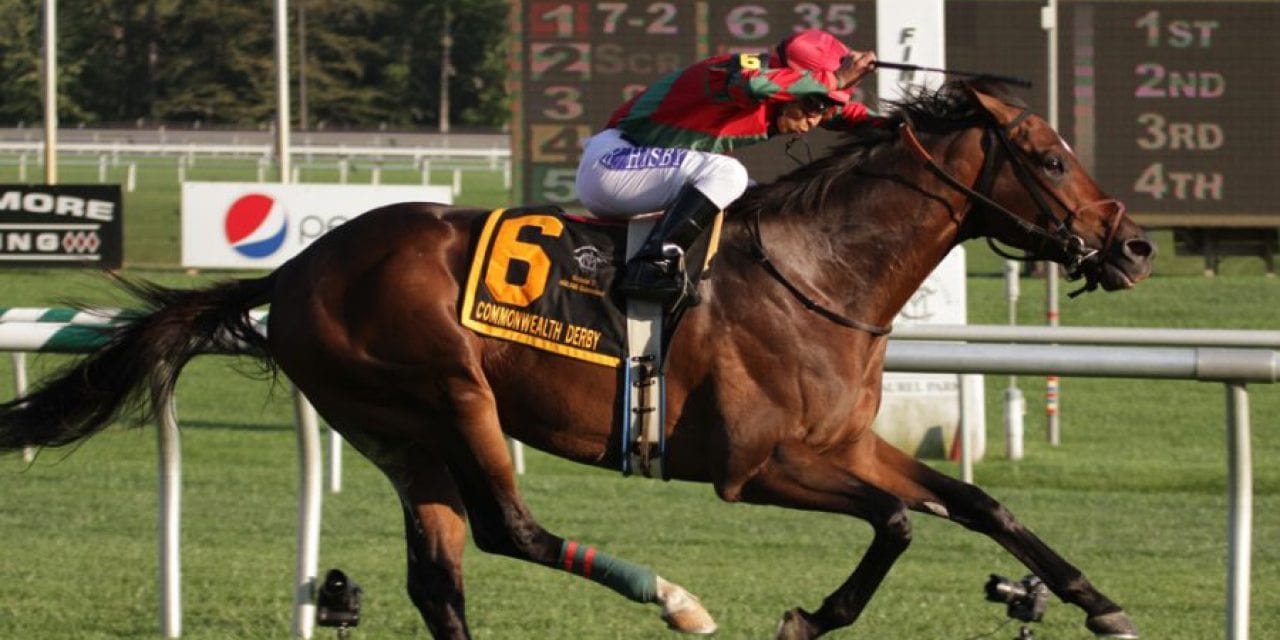 One Go All Go parlayed a pace-controlling trip to shock the G2 Commonwealth Derby last fall at Laurel Park. Photo by Laurie Asseo.

House Bill 965, introduced by Delegate Jay Walker (D-26), would make available to horse racing a total of $1.1 million out of State Lottery funds each year.

Nearly half of that money — $500,000 — would be directed to the “Maryland International,” which the legislation specifies is a race to be run on turf at Laurel Park.

The DC International, inaugurated in 1952, was unique in those pre-Breeders’ Cup days: the only truly international race in the United States.  Its first winner was the great British racer Wilwyn, and the race would go to foreign runners 21 times in 43 runnings.  That included horses from France, Ireland, Australia, and Venezuela, as well as Great Britain.  Even horses from the Soviet Union competed in the International.

The International, a Grade 1 race which was the precursor to the Breeders’ Cup, was largely killed off by that event.  Its last winner, in 1994, was the Eclipse champion grass horse for that year, the Virginia-bred Paradise Creek.

Run on the grass at distances ranging from one mile to 1 1/2 miles, in its time, it was known both for great racing and its international flair and flavor.  In fact, it was featured in the Dick Francis thriller “The Danger.”

“I’m old enough to remember the excitement and the hoopla about the old International,” said Maryland Racing Commission member and former chairman Bruce Quade.  “It was a week-long event and, next to the Preakness, Maryland’s biggest racing day. It brought people from all over the world to our region and it was a showcase event for our state.”

Ritvo said that he hoped to bring the International back in its full flower, as a global showcase for Laurel Park and Maryland racing.

Ritvo said that he envisioned the race taking place five to six weeks prior to the Breeders’ Cup, with international horses competing in the International as their final pre-Breeders’ Cup test.  Other turf races in that timeframe include the Grade 1 Joe Hirsch Turf Classic at Belmont Park and the Grade 2 Commonwealth Turf Cup, which last year was run at Laurel.

No Maryland-bred has won the Preakness since Deputed Testamony did so in 1983.  The last to finish in the top three was Magic Weisner, who ran second, behind War Emblem, in 2002.  Under Walker’s bill, the funds would revert to the State Lottery if no Maryland-bred qualifies for them.

Delegate Walker’s bill, which has no cosponsors, has been referred to the House Ways and Means Committee.  It is scheduled for a hearing March 4.  He could not be reached prior to publication.

Quade, who said he had not seen the bill and thus was not commenting on it specifically, nevertheless endorsed the idea of bringing the International back.

“One of the cornerstone initiatives for racing’s future success is to have big event days, with increased attendance and national interest,” he said.  “The International is all of this, and  pardon the pun, would put Maryland on an international stage.  In addition to greatly helping racing, it would benefit the state, with all of the attendant dollars coming in for hotels, dining, and tourism.”

Added Ritvo, “Laurel will never be completely back until we get the International back.”