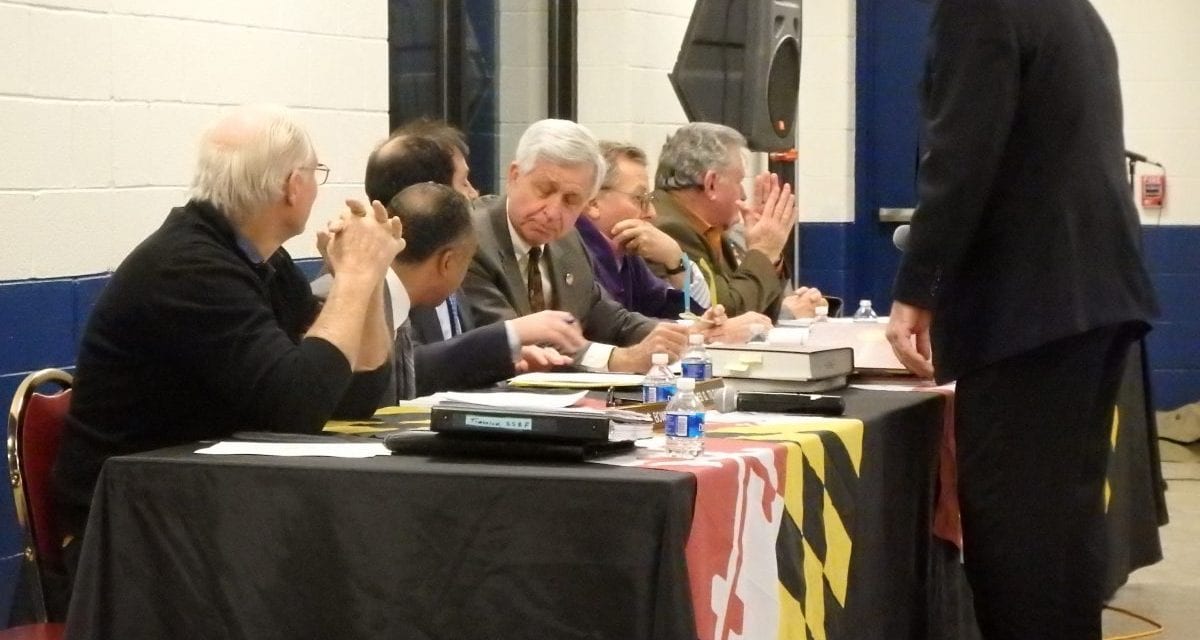 Commissioners discuss the issues at tonight’s hearing. Chairman John McDaniel is seated at center. Photo by The Racing Biz.

A combative crowd that topped 300 and overflowed the Mosner Miller Building at the Maryland State Fairgrounds turned out for Wednesday evening’s Maryland Racing Commission hearing to debate the merits of a proposed year-round off-track betting (OTB) facility at the Timonium racetrack on the grounds.

But in the end, after nearly two-and-a-half hours of often spirited, occasionally odd sparring, the Commission adjourned the meeting without rendering a decision.

“It would be my intent to announce our decision on Tuesday” at the Commission’s regular monthly meeting, Commission chairman John McDaniel told the assembled crowd at the start of the meeting.

McDaniel indicated that the six commissioners present — he was joined by David Hayden, Tom Winebrener, Tom Bowman, Charles Tildon, and Ernest Grecco — would deliberate and be the only ones to vote on the decision, leaving three commissioners who did not attend the hearing out of the decision making process.

The decision not to render a final verdict this evening led to the event’s first tussle.

“Rolling over serves your purpose,” called a voice from the back of the room.

“There’s no advantage to offend or attack those who are making the decision,” McDaniel retorted.

The main advocates for the project, which would place a year-round OTB in the second floor of the racetrack’s mostly unused grandstand, were the two partners in the project, the Maryland Jockey Club and the Maryland State Fair and Agricultural Society, which operates the Fair.

For the Maryland Jockey Club (MJC), which operates Laurel Park and Pimlico Race Course, as well as other OTB sites in Colonial Beach and at the Horseshoe Casino in Baltimore, the project is part of a broader effort to rebuild the company’s OTB network, which had foundered in recent years.

“We’ve been trying to build this network throughout the state,” said MJC president Sal Sinatra.  “We renovated the betting area and thought it would be a nice amenity to the fair.”

The partners estimate that they would split about one million dollars annually in revenue from the facility, which they believe will attract 50-150 patrons daily.

If anything, the project is even more important to the Fair, which finds itself, said longtime Fair board member Bill Marlow, the owner of about two dozen buildings, all but one of which is significantly dated.

“Our revenues are dwindling and the cost to produce those revenues grows every year,” Marlow told the Commission.  “To let this opportunity slip through our fingers would not bode well for the racing industry in the state of Maryland or for the centuries-old tradition of racing at the State Fair.”

Others among the 115 proponents of the project that signed up to speak pointed to the economic benefits to the community as a whole, including a cadre of workers from Hightopps Backstage Grille, the nearby restaurant that will provide the food service to the site.  Others pointed to the benefits to agriculture.

“We support the project because of the impact that it will have on the agricultural community and the trickle-down effects of a healthy equine community,” added Jo-Ann Chason, president of the Baltimore County Farm Bureau, which voted to endorse the project.

“I speak selfishly when I say what is good for Maryland breeding and racing is also good for Kentucky breeding and racing,” said Lexington, KY native Layton Register, pointing to the $60 million worth of horses sold at the Fasig-Tipton Midlantic sales last year.

Yet opponents pointed to a process that they said seemed secretive and designed to keep them in the dark and a fear that the OTB would merely be the opening salvo in a battle that would lead to full-scale casino gambling in Timonium.

“The timing of this seems like to the community that this is a done deal,” Delegate Susan Aumann (R-42B), who has cosponsored state legislation to halt the OTB, told the Commission.

Critics described a process in which, said Baltimore County Councilman Wade Kach (R-3), “we have the cart before the horse.”  Kach, who has introduced county legislation that he says would kill the project, said that he didn’t hear of the project until eight days before the originally scheduled January 22 hearing, and then only because a constituent had learned of it in a casual conversation at a neighborhood bar.

“This is no way to run a government,” Kach added.  “It’s just no way to do it.  We do have the pulse of the people, and they need to be heard.”

Kach said that counsel for the County Council has told him that current zoning rules would not permit a year-round OTB at the site, but Eric London, of the state attorney general’s office, demurred.  “We interpret the zoning code differently,” said London.

Critics claim that the substantial amount of work done on the site before the public knew about it points to an outcome that predetermined; even Wednesday’s open house, designed to allay community fears by showing people the high-quality environment intended for the site, seemed instead to stoke them. 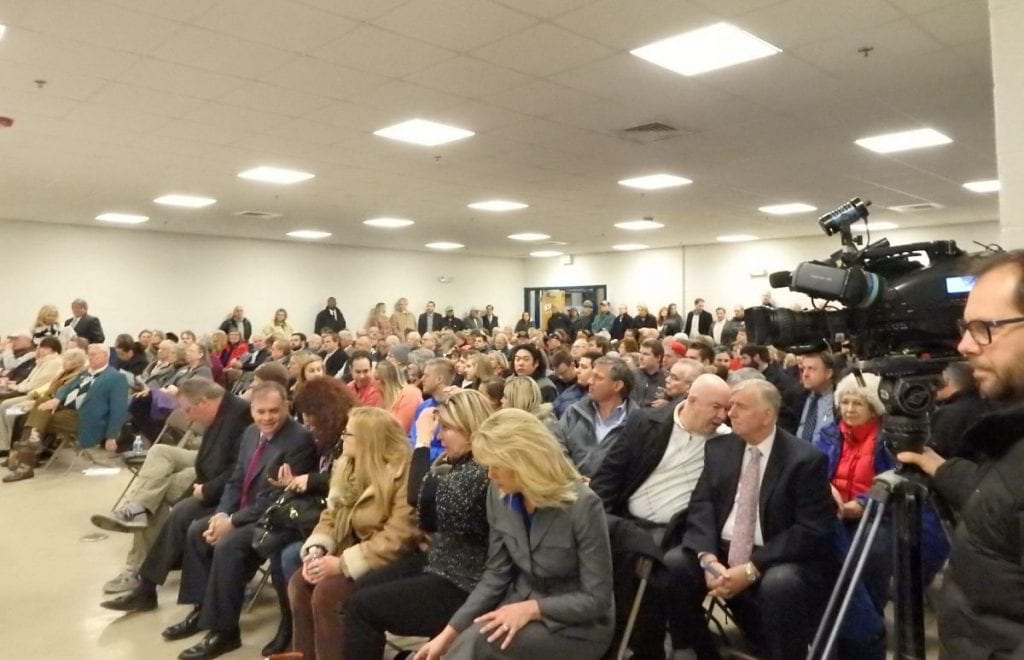 The big crowd at tonight’s Maryland Racing Commission hearing in Timonium. Photo by The Racing Biz.

And state Delegate Chris West, the primary sponsor of anti-OTB legislation in the General Assembly, who also has introduced a bill to create a more elaborate and prescribed public involvement process for the Commission to follow in future OTB situations, had a warning for the Commission.

“If my bill passes, this will never happen again,” he said.

For many of the 185 opponents in the building, the fear of casino gaming at the site, which though in primarily a commercial area does have nearby residential pockets, is another major concern.

“One of the greatest fears of the opponents in this room is that this is a slippery slope to casino gambling,” said Eric Rockel, president of the Greater Timonium Community Council, which opposes the project.

Nearby resident Mark Phelps, who said that the work on the project was “being completed in an underhanded, mistrusting way,” added, to cheers from the project’s opponents, “Is off-track betting what we want to see in Timonium?  I’d say no.”

The night had its odd moments, as well.

One opponent of the project said that it was “not a racetrack facility,” causing one wag to wonder what she thought the dirt oval and grandstand were for.

Another person came in at the very end and asked to speak, but when granted the opportunity, wondered who the Commissioners were and why they were sitting in front of the room.  When he seemed offended that his opportunity to speak had disappeared, McDaniel replied, “Well, you didn’t even know where you were.”

While it may not be possible for project proponents to retrace their steps on the project, some held out hope for an amicable resolution even while others in the audience threatened legal action.

“There has to be some way to work this out,” said Delegate Aumann.  “I implore you to understand what the impact could be to our community.”

Kach, the county council member, was jeered when he suggested a compromise.  “You’re selling us down the road,” someone yelled.

But, he said outside afterwards in the bitter cold, “My preference is to attempt to work it out. I have a great concern for the horse industry here in Maryland, and for this property here.  I represent all of northern Baltimore County, and the taxpayers have spent tens of millions of dollars preserving land in Baltimore County — we have 65,000 acres preserved.  The situation is, you have horse farms and other farms up there and I want them to be successful. The aid which is coming from this OTB really would be helpful.  But a governmental agency, it’s just wrong to come in and say, we’re going to do this and we’re not going to tell everyone.”

Kach said he would like to see a restriction placed on the deed to the property prohibiting a casino at the site.

The MJC’s Sinatra said he’s willing to try to meet opponents halfway.  “I’ve written it down (that we won’t support a casino onsite),” he said.  “[But] I’m the license holder, but I’m not the property owner.”

The property owner, of course, is the State Fair, and board member Marlow was reluctant to commit to a deed restriction, seeing it as considerably more than halfway.  “First of all, even [Delegate] Chris West told [opponents] last night there’s not a chance of casino gambling coming here,” he said.  “You’d need a referendum.  You’d have to change the zoning, And the legislature would have to enact a law.  Our feeling is, we went along with all this, we went along with the zoning — I helped draft the legislation which says it is specifically prohibited at the state fair. Is it right for us to accede to the wishes of 185 people to reach 10 years hence when the majority of Maryland voters might say we want casino gambling at the State Fair?  It’s not up to us to make that decision.”

One thing’s clear: the next decision is in the hands of the Maryland Racing Commission.

“In 30 years [on the Commission], I’ve never seen anything quite like this, and I think a lot of valid points about communicating, paving the road before you go down it, and all that,” Commission chair John McDaniel said.  “At the end of the day, we’re going to deliberate, we’ll have a meeting before the Racing Commission, and decide what to do.”

“Maryland is a proud state with deep horseracing roots,” said Sinatra.  “The purpose is to make horse racing relevant again in this state.”