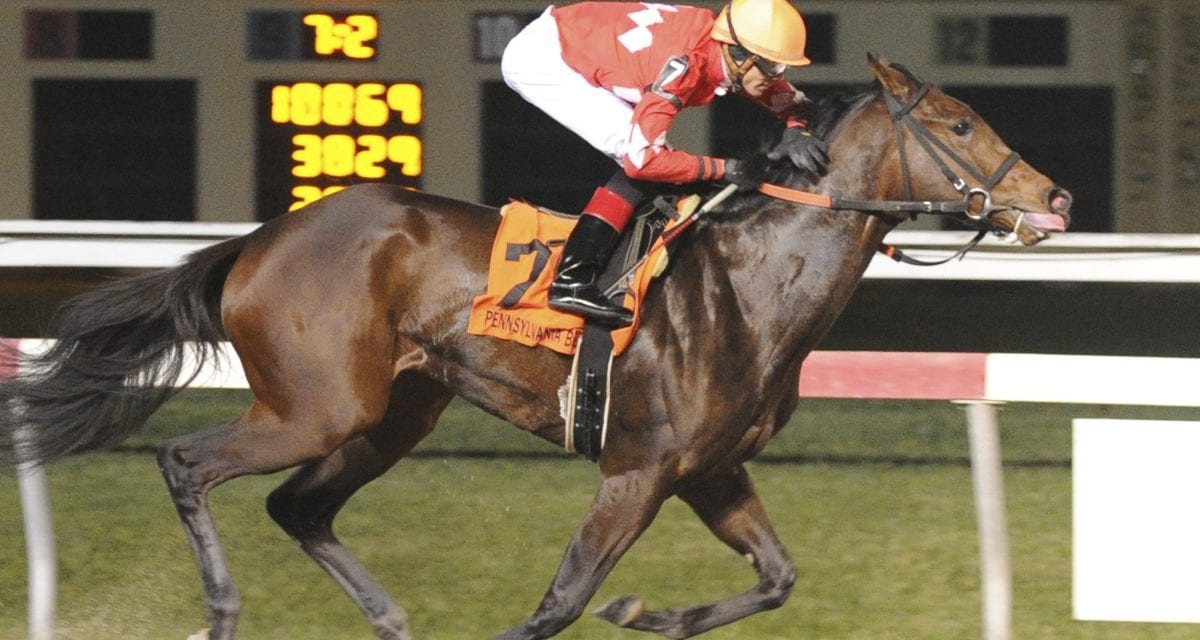 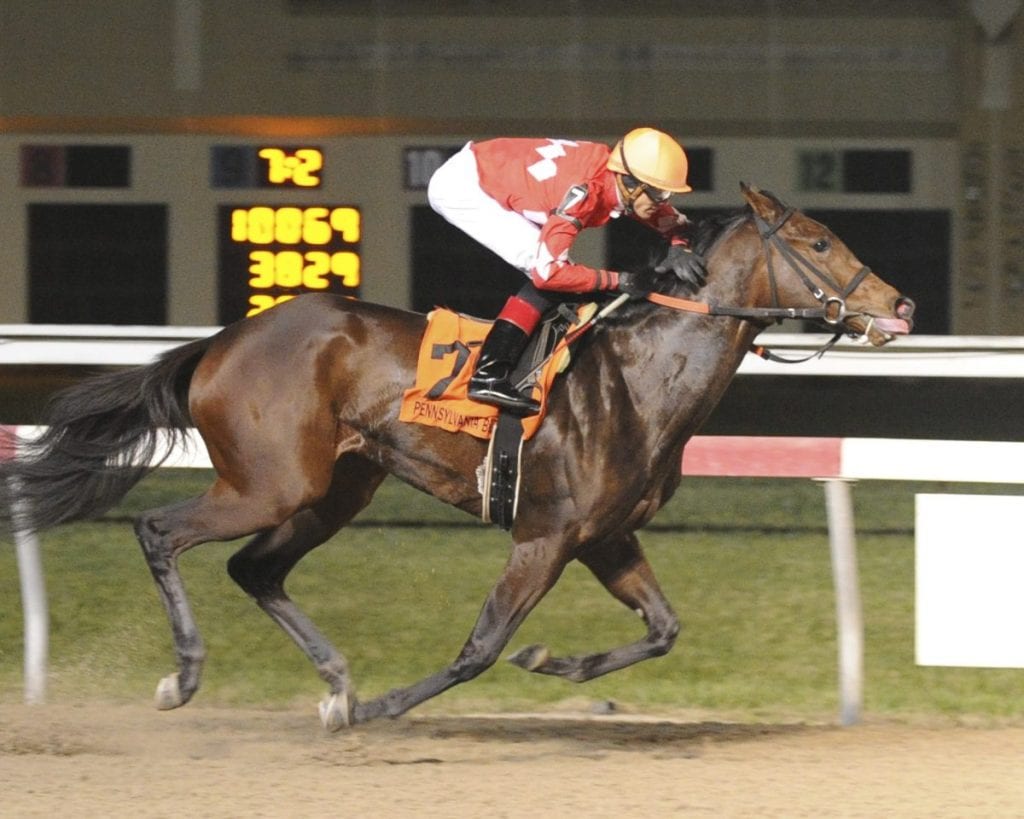 Behrnik’s Bank was awfully lonely in the Blue Mountain Juvenile Fillies, winning by 13. Photo by B & D Photography.

One of the most exciting juvenile fillies to emerge on the local scene this year is a Pennsylvania-bred daughter of a little-known New York sire who has won her two starts by a combined 31 ½ lengths.

Behrnik’s Bank, owned and bred by Peter Kazamias, raised eyebrows when she burst out of the starting gate at Penn National on November 4 at odds of 14-1, opened up a seven-length lead on her nine rivals by the half-mile pole, and then quickly poured it on, rolling down the stretch in the six furlong maiden special weight for state-breds to win by 18-½ lengths in the eye-popping time of 1:09.64.

Kazamias and his trainer and longtime friend, Dimitrios Synnefias, decided to take the conservative route with the dark bay or brown miss and entered her in the $76,000 Blue Mountain Juvenile Fillies Stakes for state-breds at the Grantville course November 25. This time, Penn National punters hammered her at the windows, sending her off as the heavy favorite at 20 cents on the dollar versus six opponents.

Behrnik’s Bank didn’t disappoint, putting on another tour-de-force. Under jockey Edwin Gonzalez, who had been aboard for her maiden voyage, she speed-popped the field at the break, held a 10-length advantage over Parx invader Little Miss Miss after a half-mile in 44.95, and then won in a gallop, never seriously challenged at any point. She glided under the wire 13 lengths in front of Its a Journey in 1:10.22, while geared down at the end.  She earned a strong Beyer speed figure of 94.

After the Blue Mountain, Kazamias said he was fielding offers to buy the filly, but as of this writing she remains under his ownership.

“She will probably run next in the New York Stallion stakes series (Fifth Ave. Div. for 2-year-old fillies) at Aqueduct on December 20,” said Kazamias. “After that, she’ll get some time off and we’ll look for some stakes for her.”

Kazamias said that the filly had shown some promise during her early training, but he didn’t expect her to be so dominating in her first two races.  “She had some good works, but I didn’t know she would run so big,” said Kazamias, who noted that Behrnik’s Bank is “16 hands and still growing.”

Kazamias has three farms – one near Annville, Pa., one in Mullica Hill, N. J., and a third in Middletown, N. Y. He said he moves his broodmares around to all three farms; thus Behrnik, the dam of Behrnik’s Bank, ended up foaling in Pennsylvania.

Behrnik, a stakes-placed, hard-knocking daughter of Chimes Band, won 10 races from 45 starts and earned $385,513 while racing exclusively in New York. She was owned and trained by Kazamias during her career.

Bank Heist entered stud in 2012, and Behrnik’s Bank became his first winner. The stallion is a dark bay son of Maria’s Mon out of the unraced Dehere mare Candytuft and commanded $900,000 at the 2007 Keeneland September yearling sale. He is a half-brother to multiple Grade 1 winner and champion sprinter Midnight Lute, who is also a sire.

Bank Heist, who broke his maiden at Saratoga, was primarily supported by Kazamias in his first two years at stud, siring 11 foals in 2013 and eight foals last year. This year, there were 13 foals. Thanks to Behrnik’s Bank, Kazamias has increased Bank Heist’s stud fee from $2,500 to $10,000 for 2016, and said he has gotten “lots of calls” to breed to him, expecting a book of 50 or more mares.

Another horse bred by Kazamias, but foaled at his New Jersey farm, is Green Gratto, who captured the Gr. 3, $250,000 Fall Highweight Handicap on Thanksgiving Day at Aqueduct.

Green Gratto is by Here’s Zealous, who stands at Kazamias’ Kaz Hill Farm in New York along with Bank Heist. Purchased by co-owner and trainer Gaston Grant as a yearling, 5-year-old Green Gratto has earned $575,514.

Kazamias currently has horses in training in Pennsylvania and New York, and also races in New Jersey. As a trainer, he has saddled 188 winners from 1,169 starters, but it is as an owner where he’s really excelled.