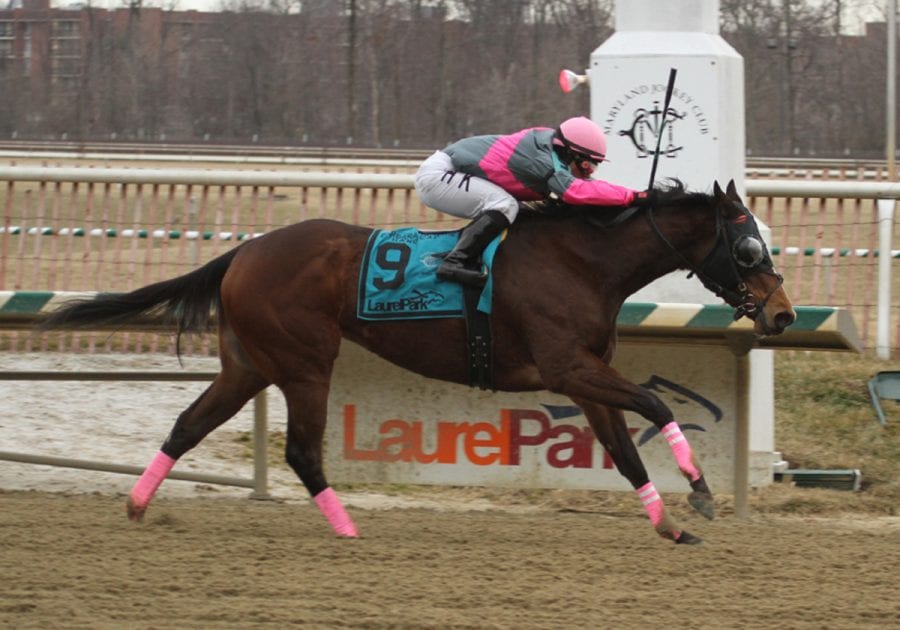 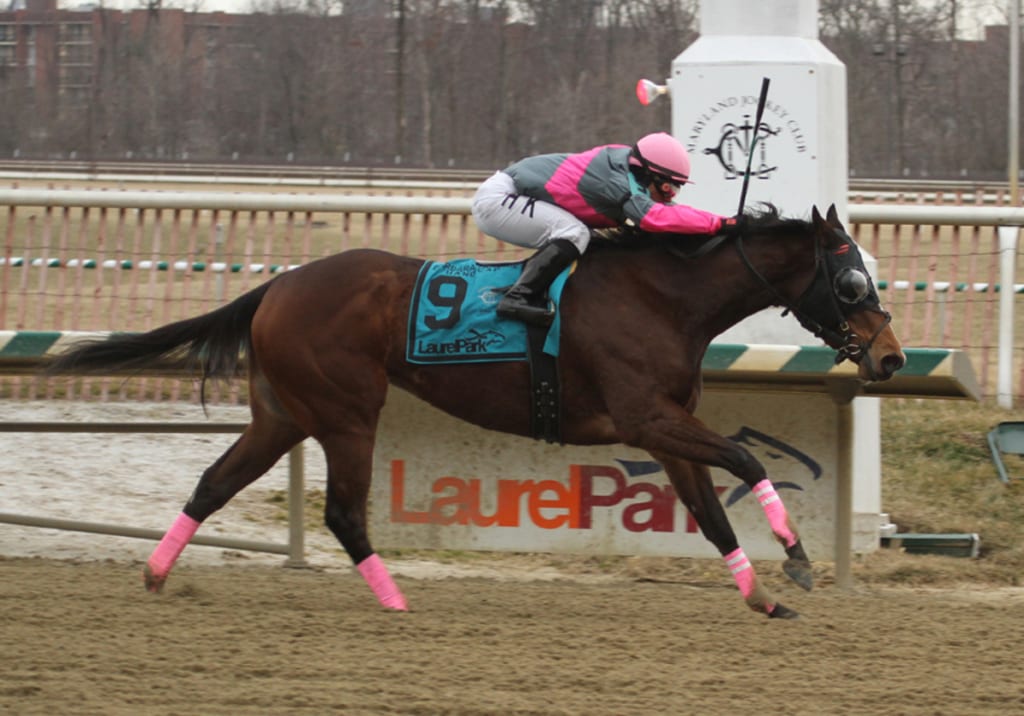 Lady Sabelia makes her first start at her home base of Laurel Park since winning the Grade 2 Barbara Fritchie in February. Photo by Laurie Asseo.

In which we ask three questions which we’ll hope the day’s racing answers:

1. How good is Cathryn Sophia?

The two-year-old daughter of Street Boss won impressively at first asking against Parx maidens — winning by 12 lengths while posting a Beyer speed figure of 92.  She figures to get pounded at the windows in Saturday’s $100,000 Gin Talking Stakes for juvenile fillies and might be worthy of the attention.

But it won’t be as easy as all that.  The field also includes Prognosis, a recent Keeneland allowance winner; stakes winner Mecke’s Madalyn; Wait Your Turn, who won a high-priced maiden claimer easily at first asking at Aqueduct; and recent Laurel Park maiden winner Dare to Be.  Perhaps the most interesting runner of all, however, is the field’s least accomplished: Thundering Sky, who was second in her career debut (at odds of 29-1), in October, and has not run back since.  That race has produced three next-out winners to date, and while Thundering Sky was no match for the winner, Lewis Bay, there’s no shame in that: that runner won the Grade 2 Demoiselle in her next start.

2. Vorticity in the Marylander?  Or Never Gone South?

Vorticity made an unusual move for trainer James Lawrence: he went north to New York off a third-place finish against Laurel Park maidens — and thrashed a maiden special weight field at Aqueduct by nearly three lengths.  His local debut, in which he was beaten four lengths, has produced four next-out winners to date, including Awesome Speed, who won that day and then won the James F. Lewis, III Stakes at Laurel Park.  Vorticity, who will have Victor Carrasco in the irons, earned an 85 Beyer speed figure that day and is the only runner here to own a win at the seven-furlong distance of today’s Marylander Stakes.

But Never Gone South figures to be a worthy rival in here.  The Cal Lynch trainee won his first two starts, including the Strike Your Colors Stakes at Delaware Park, and most recently was a game third in the James F. Lewis here, beaten less than a length.  This will be just his second start back after taking a three-month break, but a repeat of that effort might be good enough here.

3. Which Lady Sabelia will it be in the Willa on the Move?

About a year ago, Lady Sabelia, the Laurel Park-based runner for trainer Robin Graham, was making a move towards the top of the distaff sprinter class.  She was dominant in posting wins in this event (by seven lengths) and the What a Summer Stakes and followed those up with an ultra-impressive front-running score in the Grade 2 Barbara Fritchie.  All of that made her the favorite when she headed to Keeneland to run in the Grade 1 Madison.  That didn’t work out too well — she ran last after setting torrid fractions — followed that up with a disappointing second at 3-5 odds in the Skipat at Pimlico in May, and then was off until early last month.

Her return to the races, however, was stellar, as she posted a flashy seven-length win at Belmont Park in the Pumpkin Pie Stakes over a field that included multiple graded winner Classic Point; she earned a career-best 101 Beyer speed figure.  Saturday she’ll have regular jock Horacio Karamanos in the irons, and if that Lady Sabelia shows up in the $100,000 Willa on the Move, she’ll win.

If not?  The most likely beneficiary probably would be Galiana, who beat her in the Skipat, has earned over $600,000 in her career, and has won 11 of 18 career tries at the six-furlong distance.