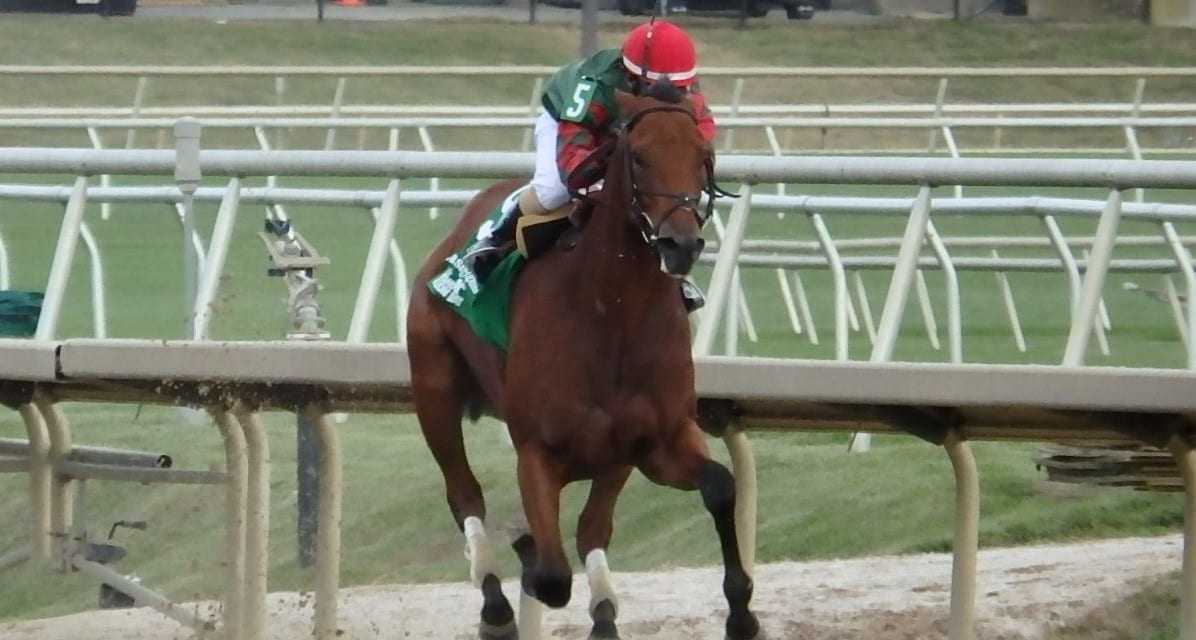 The Maryland Million Nursery won’t be decided on the racetrack after all.

The race, which was run on October 17, 2015, will instead be decided by the Maryland Racing Commission at its December 15 meeting.  That’s because Country Life Farm’s Josh Pons has appealed a stewards’ decision to fine winning trainer Katy Voss but not disqualify her horse, Corvus, after that runner tested positive for the prohibited vasodilator isoxsuprine, Pons and Maryland Racing Commission executive director Mike Hopkins confirmed December 1.

Corvus, a 25-1 outsider making his racing debut, posted a dominant 1 3/4 length victory in the $100,000, six furlong test for Maryland-sired juveniles.  Flash McCaul, a horse owned by Pons’s Country Life Farm, rallied to be second in the race.

But two weeks later, on October 31, chief steward Adam Campola called Voss to inform her that Corvus, a son of Dance with Ravens, had tested positive for isoxsuprine.  That medication is chiefly used to treat foot problems in horses.  Though primarily therapeutic in nature, isoxsuprine is not on the list of 26 medications permitted under the uniform national medication program, which Maryland has adopted.

The finding came as news to Voss, who believes that either the horse was unintentionally given the medication by one of her employees or the test was in error.

“Corvus was not on isoxsuprine, period,” she said.  “He never was on it.”

Because isoxsuprine is not permitted in any amount, its presence was noted but not quanitified.

Voss said that the Campola told her that the typical penalty for an isoxsuprine positive was a fine to the trainer, but no disqualification or loss of purse to the owner.  At her hearing November 8, Voss waived her right to have a split sample tested.

“I was going to get a split,” she said, “but when they assured me it’s not a disqualification, the advice I got was not to waste my money.”

The stewards issued their official ruling — a $500 fine, no disqualification or loss of purse, and two points assessed against her under the multiple medication violation points  system — shortly thereafter.

And that’s where the situation gets sticky.

Under racing’s standard practices, isoxsuprine is a Class 4 drug, which carries a “Class C” penalty.  Class 4 drugs include “therapeutic medications that would be expected to have less potential to affect performance” than more potent medications, according to the Association of Racing Commissioners International model rules. Some class 4 medications, such as some non-steroidal anti-inflammatory medications, are on the list of permitted “threshold” medications; others, such as isoxsuprine, are not.

Voss believes that isoxsuprine should be permitted, a position that some veterinarians share, because, as she put it, “it’s not performance-enhancing.”  She said that she was told it was not included on the list because it is not commonly used any longer.

Regardless, the recommended penalty for a Class C violation, according to the model rules, is, for the trainer, “a minimum fine of $1,000 absent mitigating circumstances.”

And for the owner: “Loss of purse,” plus a requirement that the horse pass a Commission-approved examination prior to running again.

For both Pons and Voss, there is plenty at stake — beyond the purse money.  Were Corvus to be disqualified, he would lose the $55,000 winner’s share of the purse, while Flash McCaul would see his earnings climb by $35,000.

Voss, meanwhile, is co-owner of Corvus, along with Robert Manfuso and Wayne Harrison.  And she and Manfuso bred Corvus.

Pons declined to comment beyond confirming he had appealed the stewards’ decision, saying he thought it “better to work through the Racing Commission process.”  Hopkins, likewise, would not comment “on an open case.”

It is clear that there are many facets — purse money, breeders’ awards, black type, the effectiveness and fairness of the medication rules — to the Corvus question.

But to Voss, it may be simpler than that.

“If they [the Racing Commission] reverse the stewards, I think it’s grossly unfair,” she said.  “And I think it highlights some of the problems with the new rules.  The system’s designed to catch the cheaters.  But nobody was cheating here.  We won that race fair and square.”