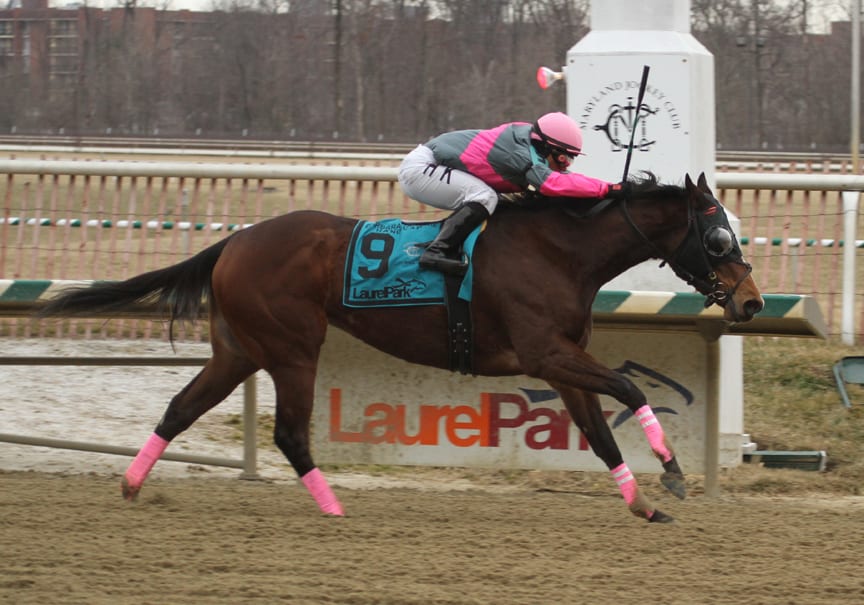 Lady Sabelia won the 2015 running of the G2 Barbara Fritchie Handicap, the highlight of the Laurel Park winter meet. Photo by Laurie Asseo.

“We’re excited about the next several months at Laurel Park,” said Sal Sinatra, President and General Manager of the Maryland Jockey Club. “Making the Tesio and Weber City Miss ‘Win & You’re In’ races will bring some extra attention to those races and that day of racing. We believe it’s another way of giving horsemen in Maryland and throughout the Mid-Atlantic and Northeast more options. We believe it will also continue building our brand throughout the country, a brand we believe has tremendous potential and growth.”

The highlight of the winter stakes schedule will be the weekend of Feb. 13-15 with the $300,000 Barbara Fritchie Saturday, Feb. 13 for fillies and mares at seven furlongs and the $250,000 General George for 3-year-olds and up at seven furlongs Monday, Feb. 15.

On March 12, Laurel will feature sophomores and races that could serve as prep races for the Tesio and Weber City Miss. The $75,000 Private Terms for 3-year-olds will be contested at a 1 1/16 miles while the $75,000 Caesar’s Wish for 3-year-old fillies will be run at a mile.

The full stakes schedule can be found at Laurel Park’s website.