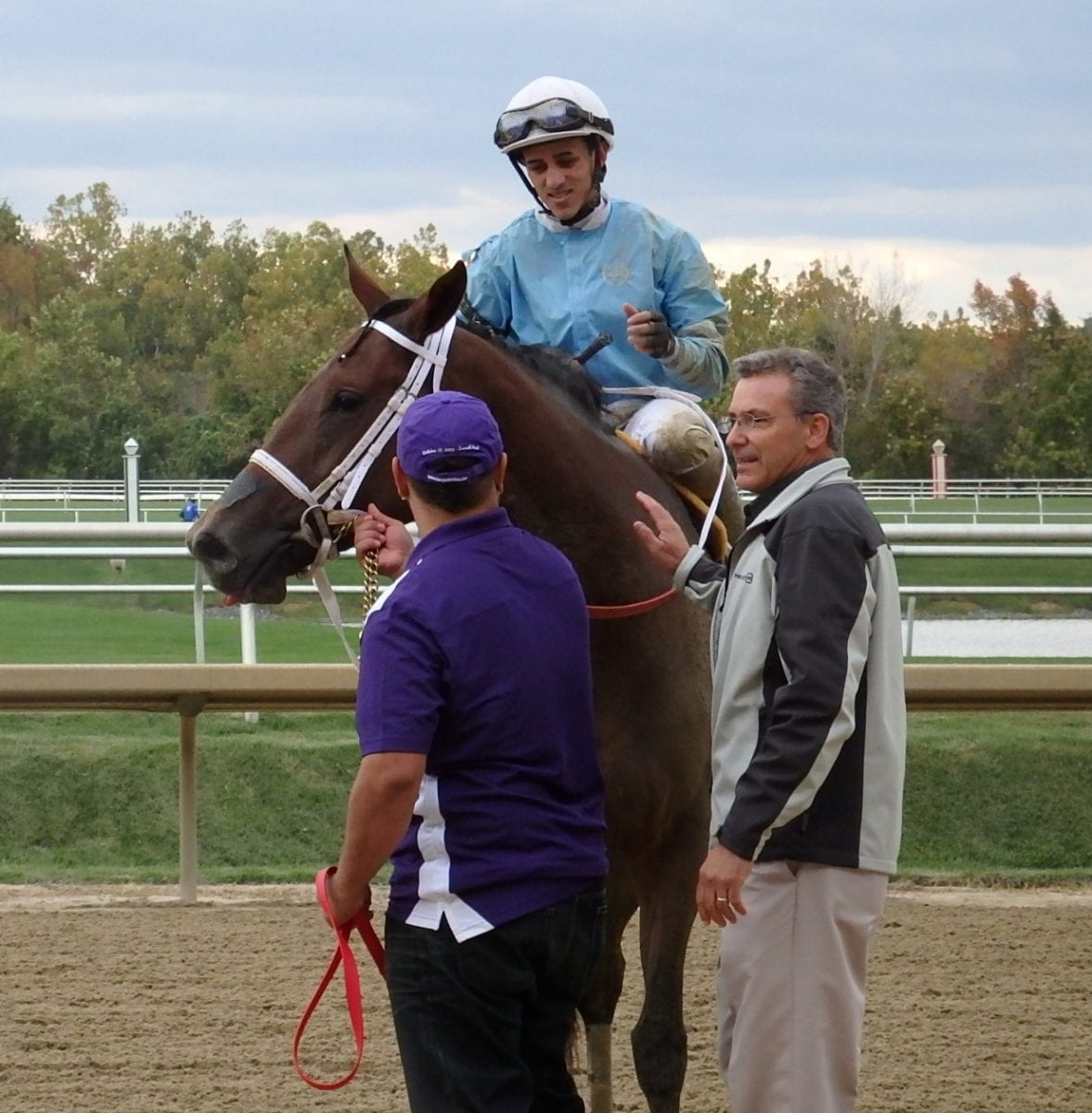 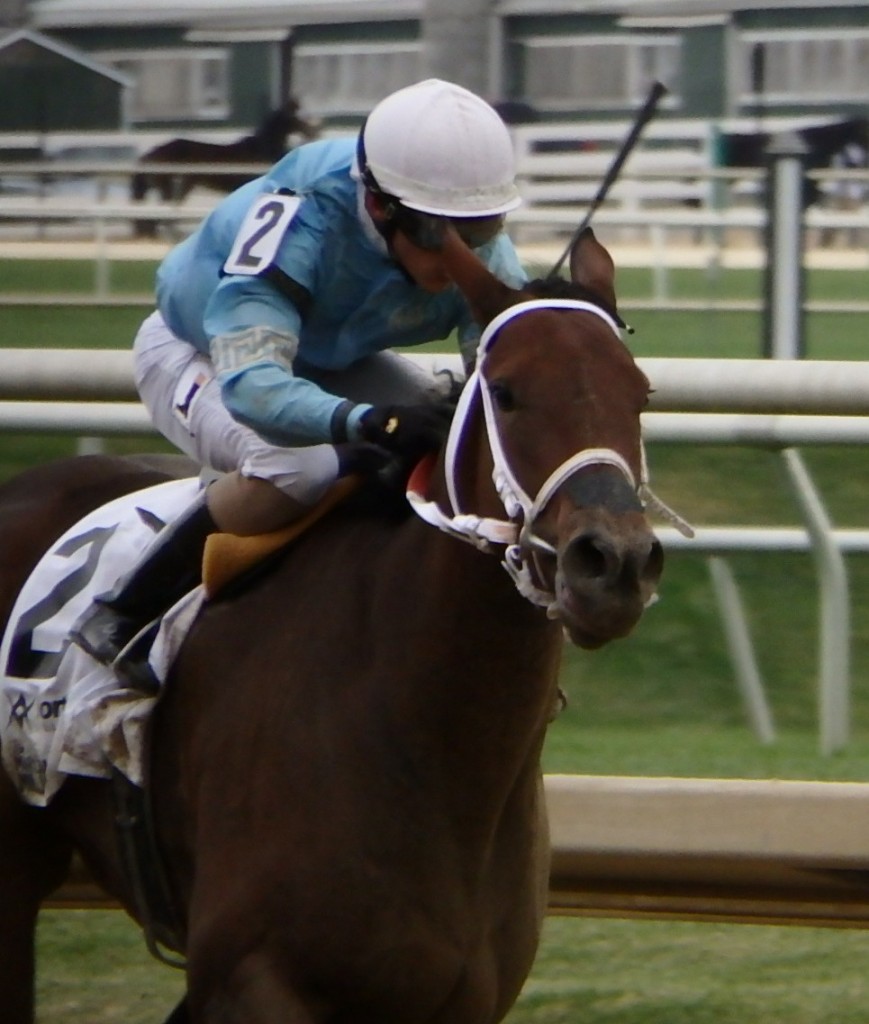 Lexington Street lost to Maryland’s Love in both horses’ debut in September, broke her maiden on October 4, and then turned the tables on that rival with an emphatic victory by nearly six lengths in the $101,000 Maryland Million Lassie.

Lexington Street, a Maryland-bred daughter of Street Sense owned and bred by Marathon Farms, drew into the Lassie only because fewer than six Maryland-sired runners entered.  It was the day’s only race that included horses not sired by Maryland-based stallions.

Lexington Street is trained by Gary Capuano and was ridden to victory by Jevian Toledo.  Fly Girl was second, and favored Table Jumper finished third, with Maryland’s Love finishing seventh.

With all the buzz around Bode Miller’s Ravenheart and splashy debut winner Flash McCaul, neither fans nor bettors paid much attention to Corvus in the $102,000 Maryland Million Nursery.  Corvus was a first-time starter for trainer Katy Voss, who also bred the son of Dance With Ravens with her partner Bob Manfuso and co-owns him Manfuso and Wayne Harrison.

As a result, Corvus went off at 25-1 before delivering a decisive 1 3/4 length victory.  Jevian Toledo rode the winner, his second juvenile stakes win of the day.

Flash McCaul rallied to be second, just ahead of Admiral Alex in third.  Ravenheart, the post time favorite, finished fourth.

MARYLAND MILLION LADIES, 3YO AND UP FILLIES AND MARES

Monster Sleeping took the Maryland Million Ladies for the second time in three years. Photo by the Maryland Jockey Club.

Monster Sleeping may not have liked the yielding ground she encountered in a fifth-place finish last out in the Lady Baltimore, but she was more than satisfied with the firm turf underfoot for yesterday’s $125,000 Maryland Million Ladies.  The daughter of Oratory, sent off the second favorite in the eight-horse field, delivered a dominant 3 3/4 length victory, stalking favored Can’t Explain before drawing away to victory.

It was Monster Sleeping’s second stakes victory of 2015, as well as her second win in three tries in this event.  Sheldon Russell had the mount for the Dale Capuano trainee, who was bred in Maryland by Mr. & Mrs. Kenneth C. Holt & Mr. & Mrs. Mark Vogel and is owned by Chip Reed.

A pair of longshots, Lucy Boo and Pauline’s Pride, completed the triple, while Can’t Explain faded to fifth.

MARYLAND MILLION DISTAFF, 3YO AND UP FILLIES AND MARES

And that’s more or less how it played out, with Lionhearted Lady, the post time favorite, taking command entering the far turn and going on to a two-length score over Aix En Provence in the $102,000 Distaff.  My Magician, who won the Maryland Million Lassie last year, finished third.

It was the fourth career victory, and first in stakes company, for the four-year-old daughter of Lionhearted, who was bred in Maryland by Black Fox Farm and is owned by JoAnn Smith.  Xavier Perez rode the filly for trainer Hamilton Smith.

The day closed with what might have been the most exciting race of all, when Stolen Love survived a prolonged head-and-head battle with even-money favorite Lunar Rock to score a head victory in the $50,000 Maryland Million Starter Handicap.  It was the third Maryland Million win of the day for rider Jevian Toledo, who piloted the son of, yes, Not for Love for trainer Claudio Gonzalez and owners Two Rivers Racing Stable LLC and MCA Racing Stable LLC.  He was bred in Maryland by Classic Thoroughbred XII.

The day also included a pair of maiden races on the turf, with trainer Tim Keefe and jockey Forest Boyce teaming up to take both of them.  For Boyce, they were two-thirds of a riding hat trick, as she also scored an upset in the Sprint with Jack’s in the Deck.

Irina Baranova took the third race, a 1 1/16 mile maiden special weight on the turf for fillies and mares; and Minor Legend took the fifth, an open version under otherwise similar conditions.