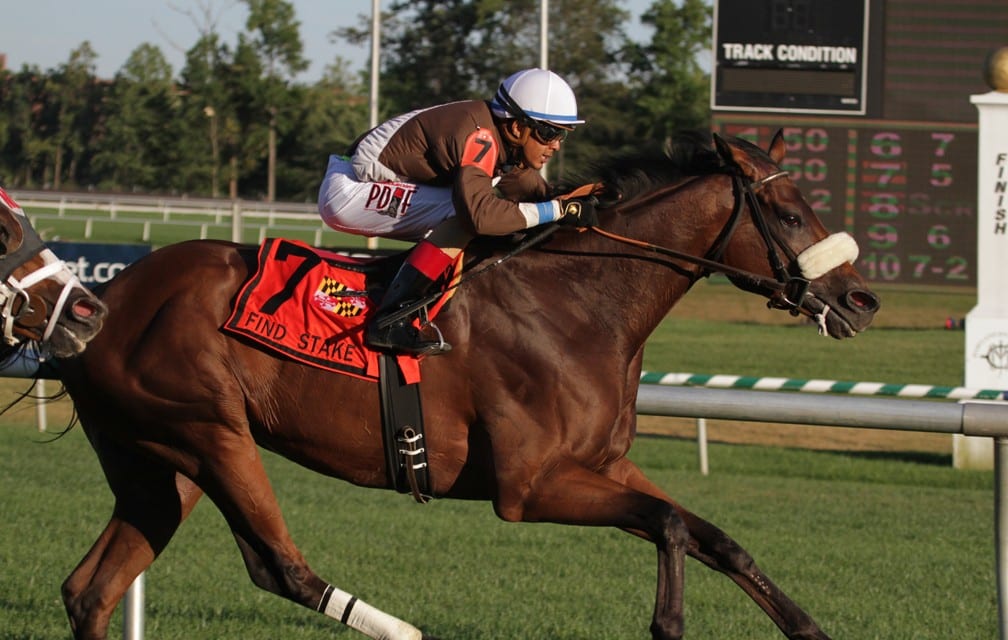 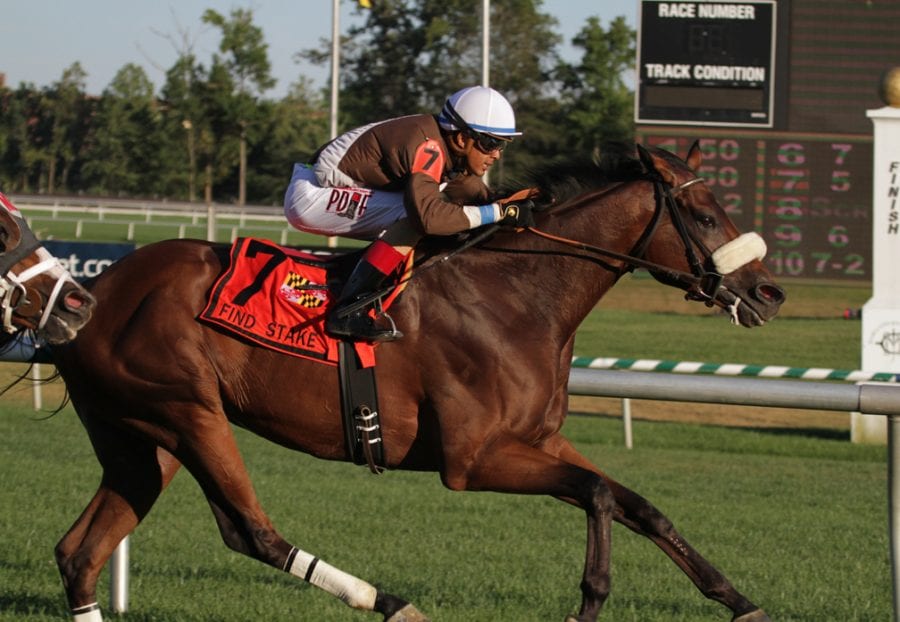 Phlash Phelps won the Find in August at Laurel. Photo by Laurie Asseo.

Hillwood Stables’ Phlash Phelps is scheduled to make a bid for his fourth consecutive victory at Laurel Park Saturday, seeking to make a splash in the $125,000 Maryland Million Turf.

The 4-year-old son of Great Notion was also entered in the $150,000 Classic but is slated to compete in the mile turf test, one of nine stakes on the $1 million Jim McKay Maryland Million program for nominated horses sired by accredited stallions standing in Maryland.

Winless in his first six career starts, Phlash Phelps broke through with his first victory in his first start as a gelding in his 2015 debut over the Pimlico turf course April 23.

“Sometimes these horses don’t concentrate and they keep looking around. He didn’t do anything wrong. I just thought by gelding him he would be a better horse,” said trainer Rodney Jenkins, who stated that Phlash Phelps would only run in the Classic if he turf was moved off the grass and the main track came up sloppy. “He’s much more focused.”

Phlash Phelps is a half-brother to Action Andy, a brilliantly fast multiple stakes-winning sprinter with earnings of more than $670,000. Action Andy’s trainer Carlos Garcia advised Jenkins not to expect too much too soon from Phlash Phelps.

“He was right. The horse had a couple little things wrong with him as a 2-year-old and 3-year-old. He popped some splints and had some growing pains,” Jenkins said. “He came around this year.”

While Phlash Phelps may have been more focused while winning his 2015 debut, Jenkins realized the Maryland-bred gelding had grown up by how he won the five-furlong turf race in a two-length romp.

“As a 3-year-old old, he would run up to a hole that opened up and you’d think he was going to gallop. But he wouldn’t go through the hole; he would hang right there,” said Jenkins, noting that his exercise rider had worked with the gelding over the winter to get him to run through holes. “When he ran through the hole that day – he kind of just went right on through – I was pleased.”

Phlash Phelps came right back a month later to win a two-turn off-the-turf allowance race at Pimlico going away by eight lengths.

“I thought he was a horse that wanted to go a mile, I didn’t know if he wanted to go a mile and an eighth,” said Jenkins, who has saddled the winners of two Maryland Million races. “The day the race came off the turf at Pimlico, I was very impressed because I didn’t think he liked the dirt either.”

Victor Carrasco, who recorded his first Maryland Million victory aboard Golden Years in the Nursery, has the return mount on Phlash Phelps, who is slated to clash with 10 rivals in the Turf.

Ellendale Racing’s Roadhog, a back-to-back Maryland Million Turf winner in 2012 and 2013, is scheduled to make his fourth start in the mile turf event Saturday. The Elizabeth Merryman-trained 8-year-old gelding, who upset venerable Ben’s Cat in the 2013 Turf, finished third behind Talk Show Man and Ben’s Cat in last year’s running.

Winless in 2015, the son of Bowman’s Band finished third, 1½ lengths behind Phlash Phelps, in the Find Stakes over the Laurel turf two starts back. Jevian Toledo has been named to ride the Pennsylvania-bred gelding for his 42nd career start.

Silverton Hill’s Havelock, a multiple-graded stakes winner, is set to make his Maryland Million debut in the Turf. The 9-year-old son of Great Notion, who is trained by Darrin Miller, has won 10 of 34 starts and more than $650,000 in purses. In two starts this year the veteran turf warrior captured an optional claiming allowance at Indiana Grand and finished off the board at Keeneland in the off-the-turf Woodford (G3), a race he won in 2011 and 2013.  Though he’s done his best work sprinting, his routing resume is nothing to sneeze at, either.

Rob Ry Farm and Jayne Marie Slysz’s A P Elvis was entered in the Turf after finishing a late-closing third in the six-furlong Laurel Dash last time out for trainer Dove Houghton. Roger Legg’s Willy d’Rocket is coming off a second-place finish and a fourth-place finish in state-bred stakes in Pennsylvania. Richard Blue Jr.’s Grandiflora followed up a fifth-place finish behind Phlash Phelps in the Find with a show effort in an optional claiming allowance.