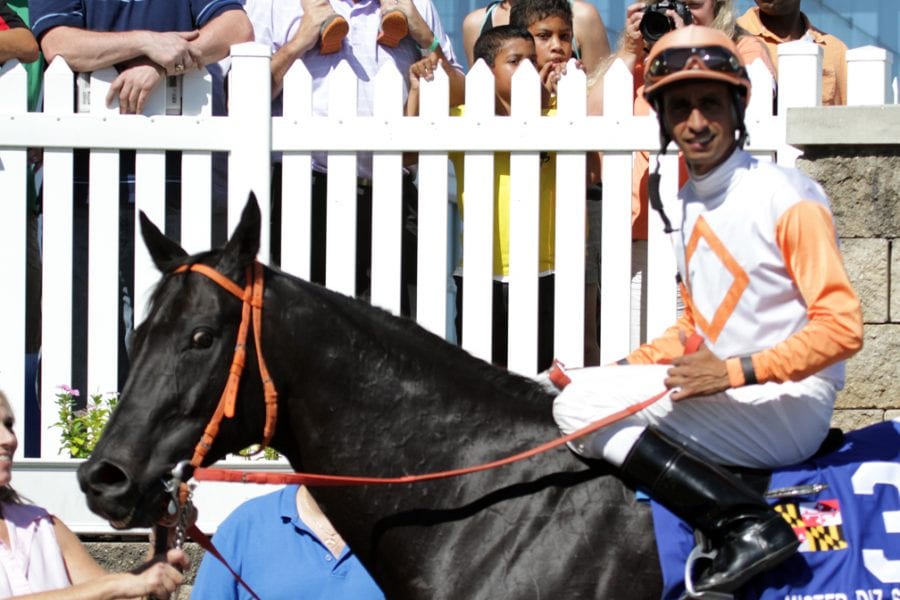 King Leatherbury’s influence on Thoroughbred racing is the stuff of legend, particularly in the Mid-Atlantic region. More widely known as a trainer, he is also the breeder of some nice horses, among them Maryland-bred stalwarts Ah Day (Malibu Moon – Endette, by Thirty Eight Paces) and of course Ben’s Cat (Parker’s Storm Cat – Twofox, by Thirty Eight Paces).

These two runners have more in common than their Hall of Fame-inductee breeder. In fact, they are out of full sisters and are by sires who are half-brothers.

So, what makes these pedigrees click? A 7-generation view of the pedigrees gives us a good look at the pattern and the key player that makes these two horses click. Both the of the sires, Malibu Moon and Parker’s Storm Cat, trace tail female to mares by Hasty Road, who is by Roman, who is a cross of full siblings Ormonde and Ornament from family 16 of the Bruce Lowe family number system. Hasty Road’s dam is by Discovery, who has more of Domino’s family than Domino himself. Discovery is not only the damsire of Hasty Road, but also of prolific sires like Bold Ruler, Intentionally, and Native Dancer. Discovery is critical to linebreeding to Domino.

Macoumba, the dam of Malibu Moon and Parker’s Storm Cat, is the result of a bunch of female strains of Man O’ War and other members of the Agnes clan (other than Ormonde and Ornament) building up over time, such as Saint Editha, Brown Bread, Ortegal (via Shut Out). Macoumba’s damsire, Green Dancer, is also a direct female-line descendant of the Agnes clan.

All this leads to the following question: why did Malibu Moon turn into a top-flight stallion while Parker’s Storm Cat languished into obscurity (and now plies his trade in Washington state)? The pedigree difference lies in their sires, A.P. Indy and Storm Cat, respectively.

The difference can be summed up in two words: La Troienne. Here is where Malibu Moon and Parker’s Storm Cat’s pedigrees diverge, and drastically so.

Storm Cat has plenty of family 16, plenty of Domino, and plenty of Discovery, which can, on their own merits, produce great runners. The secret lies in the crosses of La Troienne with sex-balances to Man O’ War, combined with the build-ups of Domino and his family, via Discovery. La Troienne is also the result of crossing full siblings Ormonde and Ornament, just like Hasty Road.

La Troienne was imported to the U.S. in foal to Gainsborough (the resultant foal was crooked and subsequently destroyed). After importation, she never saw a stallion free of Domino.

How powerful was this connection? Look at My Charmer, dam of Triple Crown winner Seattle Slew, who is the result of crossing full sisters Striking and Busher, by War Admiral, out of Baby League (Striking and Busher also have a full-brother, Mr. Busher, who bred on and is present in many top pedigrees).

In the case of known influence Better Self, a son of La Troienne (Bimelech) was bred to a daughter of War Admiral named Bee Mac (take a look at the pedigree of Unbridled) and produced a top class horse on the reverse pattern. Being a son of Man O’ War, War Admiral found all of those daughter strains of “the mostest horse” in Macoumba to be perfect sex-balances in the male strains of Man O’ War found in A.P. Indy.

There are no male lines of Man O’ War to be found in Storm Cat, only female lines. For as great as a sire as he was, Storm Cat is the odd man in these breedings, and that has made the difference between Malibu Moon’s success at stud and Parker’s Storm Cat’s infrequent success.

Temple City is off to a solid start at stud. Any son of Dynaformer brings with him Olympia, who has amazing strike capabilities when combined with La Troienne from any distance in the pedigree.
Two of Temple City’s top three runners are packing La Troienne in the dam. A different two out of three are from the sire line of Conquistador Cielo — not a line considered to be a dominant branch of the Mr. Prospector line, but the affinity here is pretty undeniable. The one of the top three not packing La Troienne, Startup Nation, carries a double of one of La Troienne’s known best friends, Tourbillon, who carries rare male strains of Glencoe, critical to matching up with all the female strains of Glencoe present in Domino.

Temple City is off to a good start and has the potential to reach the status of Malibu Moon if he receives plenty of La Troienne, Tourbillon, or Olympia. It shouldn’t be too hard for him to find mares like this as long as he stays in Kentucky.

Looking ahead, it seems to me that crossing Temple City with mares by Malibu Moon could have a powerful positive impact. A breeder could have an incredible opportunity to take advantage of Rasmussen factor (inbreeding to superior females) and sex-balanced inbreeding. This cross gives a 3 x 3 sex-balanced cross to the great Macoumba, following the X-factor pattern that is attributed to the passing of the large heart gene from one generation to the next. The cross also gives the red-hot Roberto / Buckpasser cross.

The former is the sire of hip 345, a Delaware certified filly out of the multiple stakes-winning West Virginia-bred Lion Hearted mare Aspenglow.

Temple City, meanwhile, is the sire of two horses in the sale. Hip 90 is a Pennsylvania-bred filly out of the Indian Charlie mare Indian Beads. And Hip 244, bred in Maryland, is a filly out of the stakes-winning Septieme Ciel mare Sharp Ciel.