Golden Lad to stand at Northview 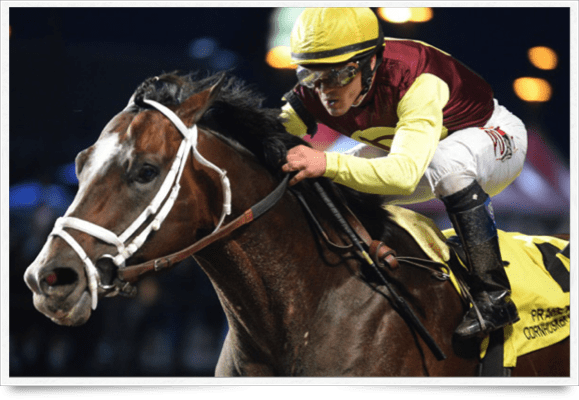 Golden Lad, a multiple graded stakes-winning son of leading sire Medaglia d’Oro from the female line of champion Eliza, has been retired to Northview Stallion Station in Chesapeake City, Md., for the 2016 season. The 5-year-old dark bay, currently being syndicated into 40 shares, will stand for $5,000 live foal, payable when the foal stands and nurses.

“We couldn’t be more excited to bring a horse of Golden Lad’s caliber to Maryland,” said Northview’s general manager David Wade. “He has the sire power, a wonderful family, an impressive race record, and his conformation is outstanding. Rarely does a stallion prospect like this get introduced into a regional market. We can’t wait for our breeders to see him.”

Bred and campaigned by E. Paul Robsham Stables and trained by Todd Pletcher, Golden Lad won eight of 15 starts, earned $645,320 and retires off back-to-back stakes wins in 2015. He concluded his career in the Prairie Meadows Cornhusker Handicap-G3, winning as the favorite over a field that included Tapiture, Page McKenney and Carve.  It was the second graded stakes win of his career.

“This horse has a lot of heart and determination,” said Pletcher. “Given his level of talent and pedigree, I was certain he would end up at stud in Kentucky. This is a major score for Maryland and the mid-Atlantic region.”

Racing exclusively in stakes company this year, he scored his first win of the year in Oaklawn Park’s Essex Handicap. All three of his victories resulted in triple digit Beyer Speed Figures.
Golden Lad won four in a row from his 3 to 4-year-old seasons, capping the streak with a dominating six and three-quarter-length victory in the Grade 3 Razorback Handicap at Oaklawn in his stakes debut. One race earlier he set a track record at Gulfstream Park for a mile and a sixteenth.

Out of the stakes-winning Seeking the Gold mare Broadway Gold, Golden Lad is a half-brother to $521,500-earner Broadway’s Alibi, winner of four of six starts including the Grade 2 Forward Gal and Grade 3 Comely Stakes and second in the Grade 1 Kentucky Oaks. Another half-sister, R Gypsy Gold, won multiple stakes and was Grade 1-placed in the Mother Goose Stakes. Both mares sold at the E. Paul Robsham Stables’ breeding stock dispersal in 2013 – Broadway’s Alibi for $2.15 million and R Gypsy Gold for $625,000.

Golden Lad’s sire Medaglia d’Oro currently ranks second in the nation by earnings, and is the nation’s co-leader with 21 stakes winners, led by top 2-year-old filly Songbird and additional Grade/Group 1 winners Mshawish and Vancouver, the latter winner of the Golden Slipper Stakes in Australia at 2. Medaglia d’ora has sired nearly 80 stakes winners lifetime, including Horse of the Year Rachel Alexandra.

“Golden Lad is an exceptional stallion prospect,” said Northview President and CEO Richard Golden. “We had to move quickly because he was ready to run in a stake at Churchill Downs in a few days.

“He checks all of the boxes. A very competitive multiple graded stakes winner as a race horse, by an outstanding sire Medaglia d’Oro, second leading sire in the country, and a family that is loaded with graded black type performers.”