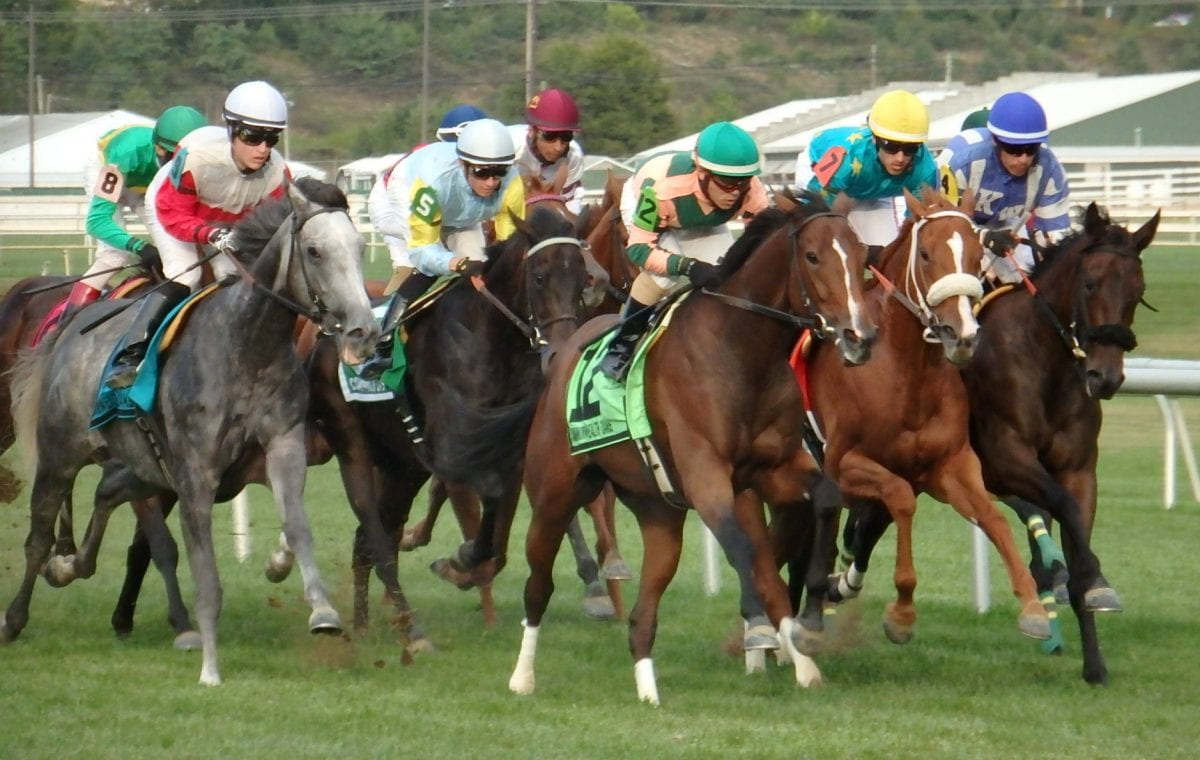 Onus was all by her lonesome in winning the G3 Commonwealth Oaks today at Laurel Park. Photo by Laurie Asseo.

Stuart Janney III’s Onus scored a facile victory over Laurel’s green for the third straight race Saturday while establishing herself as a graded-stakes winner in the $150,000 Commonwealth Oaks (G3) — and, perhaps, a threat to do bigger things downs the road.

Trained by Hall of Famer Shug McGaughey, Onus rated nicely just off the pace before roaring to the lead and rolling to a 4 1/2-length victory under jockey Forest Boyce in the 1 1/8-mile turf race for 3-year-old fillies presented by the Virginia Equine Alliance.

McGaughey, meanwhile, ran his record to a remarkable 12-for-28 at Laurel in the last two years.  Onus was the 11th consecutive McGaughey runner to finish in the money at the central Maryland track.

The daughter of Blame earned a chance to make her stakes debut in the Commonwealth Oaks after notching a pair of open-lengths victories on the Laurel turf, breaking her maiden by eight lengths July 11 and setting a course record for 1 1/16 miles (1:39 1/5) while winning an entry-level allowance by 10 ½ lengths Aug. 14.  Both races came with Forest Boyce, who rode her today, in the irons.

“The last couple times I’ve been amazed how talented she is,” said Janney, whose filly was sent to post as the 2.40-1 second choice. “A horse that can carry on so easily just off the pace and then quicken like she does is very tough to beat.”

After encountering some crowding after the break, Onus settled into a strong stalking position along the backstretch behind pacesetter Heart of Midway, who was chased by Gypsy Judy. The Kentucky-bred filly made a three-wide move on the turn and continued on to open up a clear lead and coast home, completing the 1 1/8 miles in 1:47.12.

Onus came home in racehorse time, zipping the last three-eighths of a mile in 34 2/5 seconds.

“We get along really well. I don’t tell her too much, and she kind of just does her thing,” said Boyce, who captured the race (formerly run as the Virginia Oaks) in 2013 with Nellie Cashman.  That 2013 win, at long odds, was Boyce’s first graded stakes victory.

Lola Beaux, ridden by Erluis Vaz finished second, a nose in front of Stormy Regatta and jockey Trevor McCarthy. Zvarkhova, the Chad Brown-trained runner who went off the 8-5 favorite, was never a factor during an eighth-place finish.

“I’m very happy. This is horse comes from a wonderful family. It’s the same family as Ironicus,” said Janney, referring to the multiple graded-stakes winner who captured the Bernard Baruch (G2) at Saratoga Sept. 7.

Janney said Onus is likely to be shipped to Payson Park with McGaughey’s stable for the winter – although it is possible she could run again during the fall “if there’s another race that fits her.”