No exaggeration: Exaggerated much the best in Oakley 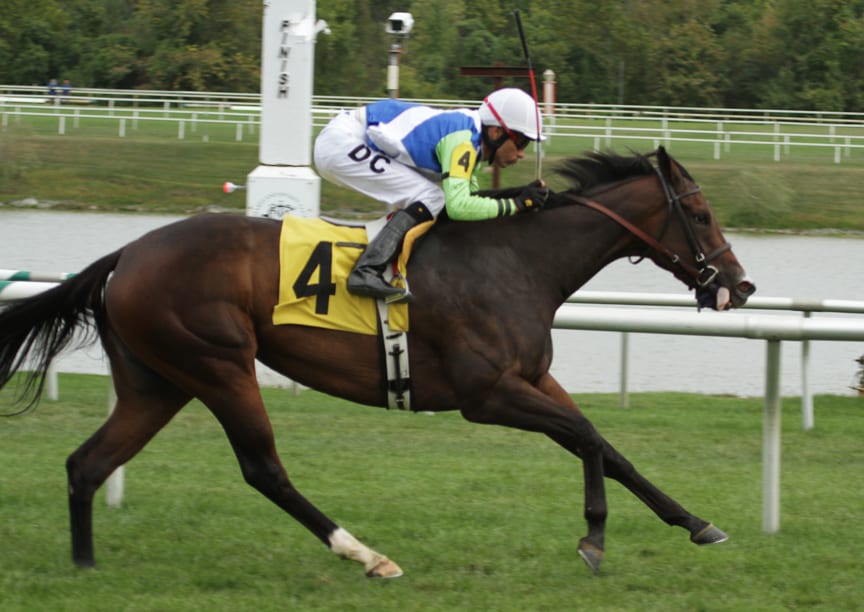 Exaggerated made it look easy in winning the Oakley Stakes by 4 1/2 lengths. Photo by Laurie Asseo.

Lael Stable’s Exaggerated, a 3-year-old daughter of Blame who sold for $250,000 at auction, remained undefeated Saturday when she impressively drew away from nine other fillies to win the $60,000 Oakley by 4 1/2 lengths.

Trained by Arnaud Delacour, Exaggerated was ridden out to victory by jockey Daniel Centeno, covering a firm 5 1/2-furlong turf course in 1:02.10. Awake the Day was second while Olga Payne was another three lengths behind in third.

The Oakley was one of six stakes races, including the Grade 3 Commonwealth Oaks, presented Saturday by the Virginia Equine Alliance and run at Laurel Park.  The Oakley, like the other stakes except for the Oaks, was limited to horses bred or sired in Virginia.

Unraced as a 2-year-old, Exaggerated made her debut Aug. 16 at Laurel at 5 1/2 furlongs on the turf and won by 2 1/2 lengths against nine others after stalking a :22.08 and :44.42 pace. Despite the strong debut, Delacour had some concerns about the Oakley.

“We didn’t know how much she learned last time just because she pretty much cleared the opposition,” Delacour said. “It’s always a little of a worry when you go against horses who have run a lot.”

There were no such worries Saturday, however, as Exaggerated  broke on top under Centeno and cruised past fractions of :22.70 and :45.12 on the way to an easy victory.

“She showed her speed and was very professional,” Delacour said. “She was great.”

Owners Roy and Gretchen Jackson were on hand to witness the filly’s second win.

“It’s been more than we expected really to see her win two races in a row,” said Roy Jackson. “Arnaud has done a great job with her and we’re just very excited.”