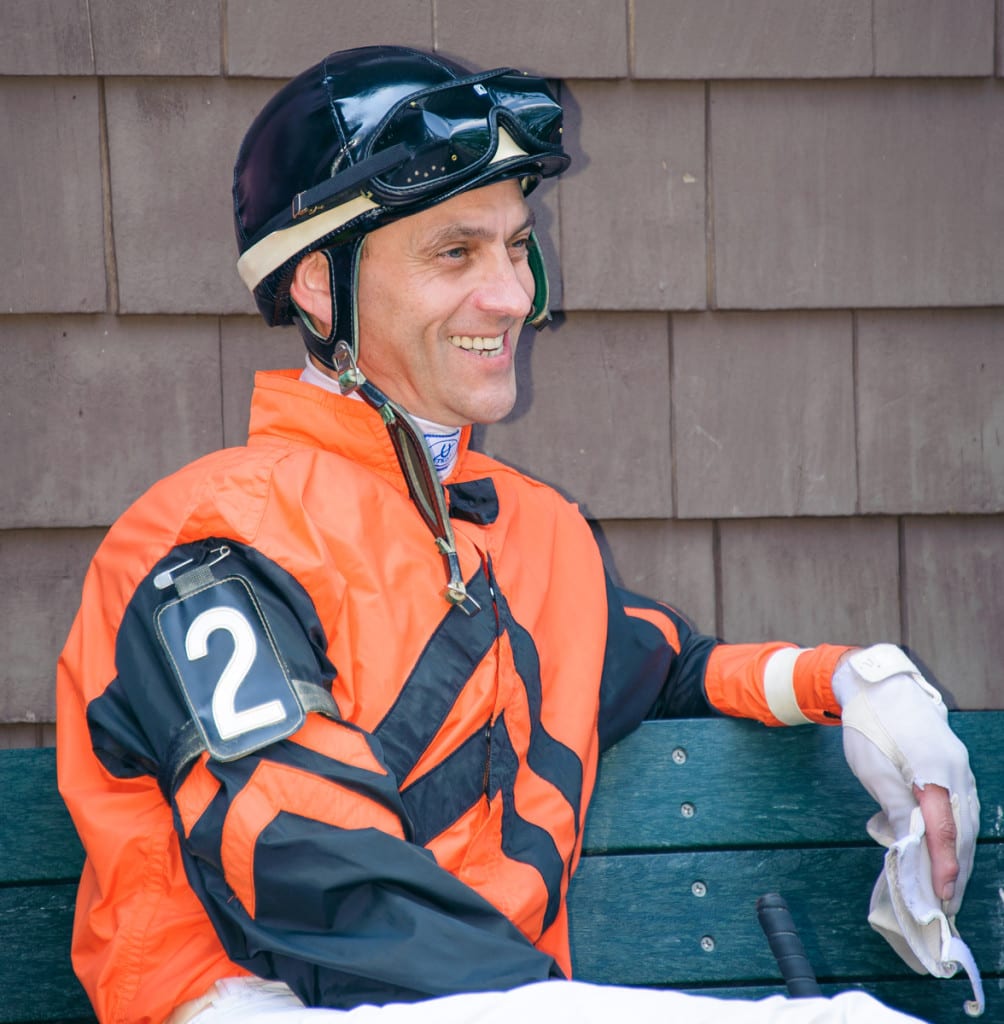 Webster’s Dictionary defines “consummate professional” as one who is “extremely skilled and accomplished at one’s vocation.”

At age 48 and with almost 30 years in the business, jockey Scott Spieth is as close to a consummate professional as one could find. With more than 4,400 career wins, the veteran is riding at Delaware Park on a regular basis for the first time this season and despite arriving here late, is having a solid meeting. He has won 31 races at Delaware and currently ranks fifth in wins and sixth in earnings in the local jockey standings. Quiet and unassuming, Spieth is well respected by his peers and is known in the business as a rider who knows where he is and what he’s doing from the time they spring the latch until they hit the finish line.

With little fanfare, Spieth has finished in the top 100 nationally in wins by jockeys for eight consecutive years.  And he’s won more career races than all but 41 other riders.

His time at Delaware has benefited him — and others.

“I’ve really enjoyed it here (at Delaware Park) this summer,” the rider said after the races recently.  “This spring after Tampa (Bay Downs) closed, I went to Cleveland with the intention of riding at Thistledown this summer and was actually leading rider there early in the meeting, but I’ve been going with (trainer) Aldana Gonzalez for some time now and traveling seven hours one way so we could be together just didn’t make sense.

“So I packed up and came to Delaware. It was about three weeks into the meeting when we got here and it took some time to build up business, but fortunately there’s a number of people here who I’ve ridden for in the past either at Tampa or at other places. As the meet has progressed we’ve been steadily building up steam. I think a Tampa Bay Downs-Delaware Park circuit will work for us from now on.”

Spieth is the father of five, (Kirsten Swan and Austin Swan, 26 and 21, and Tori,16, Valerie,9, and Bruin, 8).  He gets a chance to watch his eldest perform, as Kirsten is also a jockey who has enjoyed a good measure of success riding Arabians.

Having ridden with and against hundreds of riders for more than three decades — Spieth rode quarter horses for several years before moving to thoroughbreds in 1986 — Spieth has watched the evolution of jockeys from the early 1980s to the present. While he feels there are some fine young riders around, he also thinks many youngsters are pushed too hard to start riding before they are fully prepared.

“In the old days you were expected to learn the business and the horse from the ground up,” Spieth explained.  “We mucked stalls, rubbed horses, walked horses and did a number of other things around the barn long before we began getting on horses and riding in the afternoon. Along the way we picked up a lot of knowledge about the anatomy of a horse, the leg problems a horse and its trainer have to deal with, and how to recognize a weakness or problem by the way a horse traveled. In short we had a lot more hands-on experience to call upon compared to the young riders coming up these days.”

“I think there’s such pressure from agents and others to start a lot of these young kids riding that they’re forced to learn too much too early,” he pointed out.  “I think the idea of riding schools is great and there are some good ones.  But in general I find a lot of youngsters who begin riding these days just aren’t grounded enough in the business. Unfortunately, when you learn lessons as a rider, they can be painful and nobody wants that.”

Having said that, Spieth pointed out three young jockeys riding regularly at Delaware Park who have impressed him.

“Victor Carrasco, Jevian Toledo and Tyler Conner are all nice young men who seem to be working hard to become solid, well rounded professionals,” Spieth remarked. “They’re polite, they ask questions, and they want to learn. I think all are well on the way to becoming outstanding riders.”

With 4,457 career wins, Spieth has his sights set on that coveted 5,000th win, a mark achieved by just 31 riders in history. Since he has won at least 100 races in 25 of the last 26 years, the chances of the rider achieving that goal sometime in the next five or six years look good.

“There’s no question I’ve got my eye on that 5,000th win.” the rider admitted.  “I’ve been lucky that I’m still in pretty good shape physically, I still like what I’m doing and I love to win.  As long as I feel I can compete with these young bucks I’m going to keep riding.”