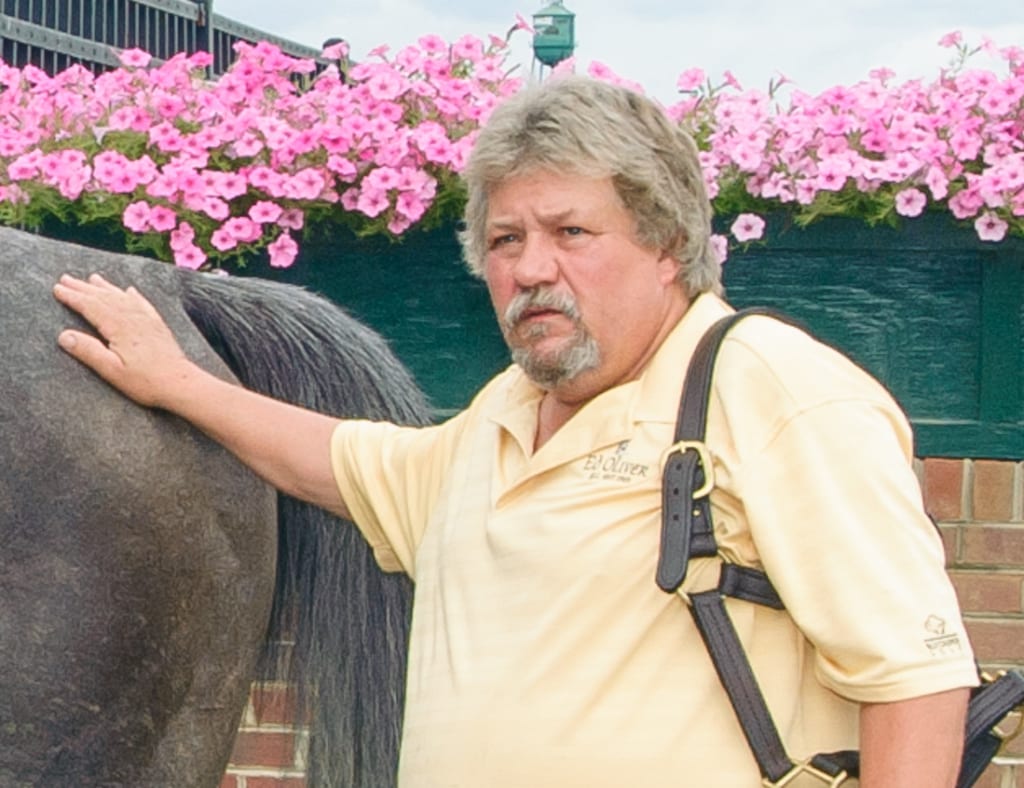 True horsemen are like violin makers: highly sought after and in short supply these days. Training greats like Charlie Whittingham, Woody Stephens and Allen Jerkens have gone to that great racetrack in the sky, photo, leaving a void in their absence.

Fortunately for the business, a number of veteran trainers are passing along to their offspring the body of knowledge they’ve amassed through the years. Trainers like Jimmy Jerkens (son of Allen), Steve Dimauro Jr., Mark Hennig (son of John Hennig), and more locally Elizabeth Voss (daughter of Tommy Voss), who grew up watching and learning from their dads have, as Hank Williams Jr. says, been “carrying on the family tradition.”

One such beneficiary of his father’s knowledge is John Vinson. Vinson is the son of 83-year-old Garner Vinson, yet another consummate horsemen who came out of the fertile proving grounds of New England. The elder Vinson began training in 1968 and like Vinnie Blengs, George Handy, Ned Allard, Bruce Smith, and others, learned the finer points of training and horsemanship racing in what was then one of the most competitive arenas in racing.

The younger Vinson is handling the 10-horse string the Vinson family is racing at Delaware Park this summer, and the 56-year-old conditioner recalls those formative years spent learning the ins and outs of horse training from his father and others.

“You know when you’re a teenager you’re not really consciously thinking you’re soaking up knowledge, you’re just thinking about doing your work and taking off to hang with the guys,” Vinson remembers.  “I mean I was working around grooms who came up in the ’50s and ’60s, and a lot of those guys could been training on their own. As a matter of fact quite a few of those who started grooming in New England went on to become successful trainers in their own right. A good groom is worth his weight in gold and can teach a young guy the little things that can make a big difference in a horse. It’s after you get a little older and you call upon the things you learned from those days that the light goes on in your head and you think, ‘Damn I was going to the college of horsemanship and didn’t even realize it.’”

The Vinsons own and operate a 70-acre farm near Ocala, FL. After actively training for more than 26 years Garner purchased the farm in 1993 with the plan to run a small commercial breeding operation while racing a small string in Boston and at the Florida tracks. They elected to send their runners to different trainers for almost 10 years before deciding to return to training on-track themselves. While it’s a small operation compared to some, last season John Vinson’s runners won 21 percent of the time, and his 28 starters were in the money 71 percent of the time.

This season, horses running under Garner Vinson’s name have won four of 16 starts at Delaware Park, a 25 percent strike rate.

This summer the Vinsons have 10 horses at Delaware Park topped by Grey Beau, a consistent 5-year old who has won three of his last five starts. Grey Beau’s history graphically illustrates two generations of horsemen working together to bring one of their own to success at the races.

“Grey Beau had serious feet issues we had to address, so we had to give him almost a year off,” says John Vinson.  “We worked with him on the farm and got him right, then we brought him out, and he had two seconds and three thirds last season. Since we tried him on the turf he’s seemed to really take to that. He’s an honest, consistent kind of horse, and he’s earned almost $100,000 for us, so we’re happy that giving him the time off worked out.”

Meanwhile Garner, speaking from Ocala, said his boys (another son, Lee, works with his father on the farm) were always around the barn as youngsters, and while he never insisted they work exclusively for him, they always returned to the fold.

“I never had a problem with them working for other trainers,” the elder Vinson says.  “And they worked for some good outfits where I’m sure they picked up a lot of things.  But they came both came back and wanted to work with us, so that made me happy. They’re good boys and they’re both pretty good horsemen.

“I just let them do the work and I sit on the tractor a lot and supervise,” he adds with a chuckle. “I figure if I haven’t earned the right to move to the supervisory level at my age I never will.”

Racing is known as a sport where many trainers enjoy great longevity.  New Hall of Famer King Leatherbury, for example, is still active at age 82.

Garner Vinson has a theory about that.

“If you lay around in bed all day and do nothing, your body loafs like you do and it breaks down,” he observes.  “Gettting up early and putting in a full day is good for you.  At least it was good for me.”