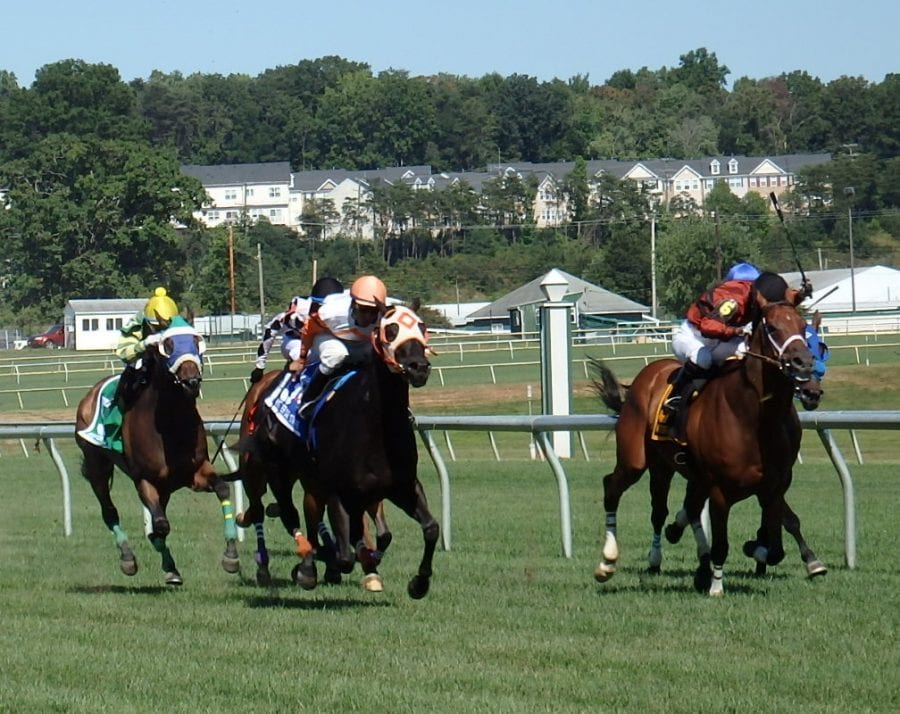 Ben’s Cat (outside) wore down Night Officer. Photo by The Racing Biz.

The nine-year-old son of Parker’s Storm Cat overcame six rivals to win this afternoon’s Mister Diz Stakes for Maryland-breds and Maryland-sired runners on the inaugural Maryland Pride Day card.  In so doing, he became one of a tiny group of runners to win the same race six consecutive times.

“Yeah, sure,” trainer-owner-breeder King Leatherbury laughed when asked if the Cat would return for a seventh Mister Diz try.  “It’s amazing.  Horses keep winning, but not the same race, especially a stake race.  To maintain the ability to win a stake race that long — very few horses do that.”

The son of Parker’s Storm Cat-Twofox, by Thirty Eight Paces won for the 30th time in his 50-race career, and the $36,000 winner’s share inched him a bit closer to the $2.5 million mark in career earnings.

“He’s the man that pays all the bills,” said Leatherbury.

In today’s race, Ben’s Cat, who was sluggish in his last start, in the Grade 3 Parx Dash, broke alertly under regular jockey Julian Pimentel before settling off the early speed.  Longshot Wire Funds, along with second favorite Night Officer and Sonny Inspired comprised the early vanguard with Pimentel and Ben’s Cat content to sit in fifth, within 2 1/4 lengths of the lead.

Turning for home, Pimentel tipped Ben’s Cat out to the six-path, and the old pro gradually wore down a game Night Officer, who held second just a half-length behind the winner while 3 1/4 lengths clear of Sonny Inspired in third.  Running time for the 5 1/2 furlongs over firm turf was 1:02.97.

Though some fans suffered a few anxious moments in the stretch, both Leatherbury and Pimentel betrayed no nervousness.

Leatherbury concurred.  “We didn’t want to knock him out in this race, having to run back in 16 days,” he explained.  “So we wanted to win but use the least amount of energy to do it.”

In the aftermath of his last race, a career-worst sixth place finish, Leatherbury had said that he was disappointed, and some fans worried that Ben’s Cat’s productive days might be past him.  But upon further review, Leatherbury said, he’d changed his mind.

“He was just sluggish early,” said the 82-year-old conditioned, inducted into the National Racing Hall of Fame just two weeks ago. “We got back so far, he had no place to move really well. I was disappointed right after the race. After I analyzed it, it really wasn’t that bad a race.”

As for the future, Leatherbury said that he would point Ben’s Cat to the Grade 3 Turf Monster at Parx Racing in 16 days.

And, perhaps, he had a message for the rest of the turf sprinting world.