While this Saturday’s 11-race “Maryland Pride” card highlighting Maryland-bred and Maryland-sired runners of all ages and both genders will be a very busy afternoon for trainer Hamilton Smith, much of the day’s success for the local conditioner will be measured by the performances of two horses that he will saddle in stakes races roughly two hours apart.

Smith will saddle horses in the first three races on the card, including a pair in the third, a five-furlong sprint on the main track for two-year-old colts and geldings, but the first tell-tale sign of his afternoon will come in the sixth race when he sends out Miss Bullistic for the $60,000 Jameela Stakes for Maryland-bred/sired fillies and mares three and up at six furlongs on the grass. A daughter of Bullsbay bred by fellow trainer Graham Motion, Miss Bullistic will make her long-awaited three-year-old debut in the Jameela following a solid freshman campaign in which she won three of seven starts — including both tries on the turf — and garnered the title of champion Maryland-bred two-year-old filly.

“This was the race that we were looking at bringing her back for,” Smith said on Thursday. “We really wanted to take our time with her and let her tell us where she could run next. I was hoping to have a race in her before now this year, but we really couldn’t find one that fit into her schedule. She’s been training really well coming into it. She loves the turf course at Laurel, so we’re hoping that she comes back ready to run. But there’s plenty more races out there for her this year.”

Miss Bullistic actually tasted defeat in each of her first two starts at Delaware Park last summer, but stayed home last September to win a pair of races on the Laurel Park turf course. She broke her maiden easily on September 6, then returned three weeks later to capture the $100,000 Selima Stakes on the lawn. Following an eighth-place finish in the Maryland Million Lassie, Miss Bullistic won a $75,000 stakes at Parx then finished second in the Maryland Juvenile Filly Championship on the Laurel main track one day after Christmas.

Miss Bullistic is one of two fillies that share the role as 5-1 third choice in the Jameela Stakes, while Everything Lovely was installed as the 9-5 morning line favorite by oddsmaker Keith Feustle. The three-year-old daughter of Pollard’s Vision has won three straight allowance sprints over the Parx turf for trainer Kathleen Demasi and will tackle older rivals in her Laurel debut, as will the Smith trainee. Miss Bullistic, under jockey Jevian Toledo, will break from post two, while Everything Lovely will leave from post 12 in a field of that size. 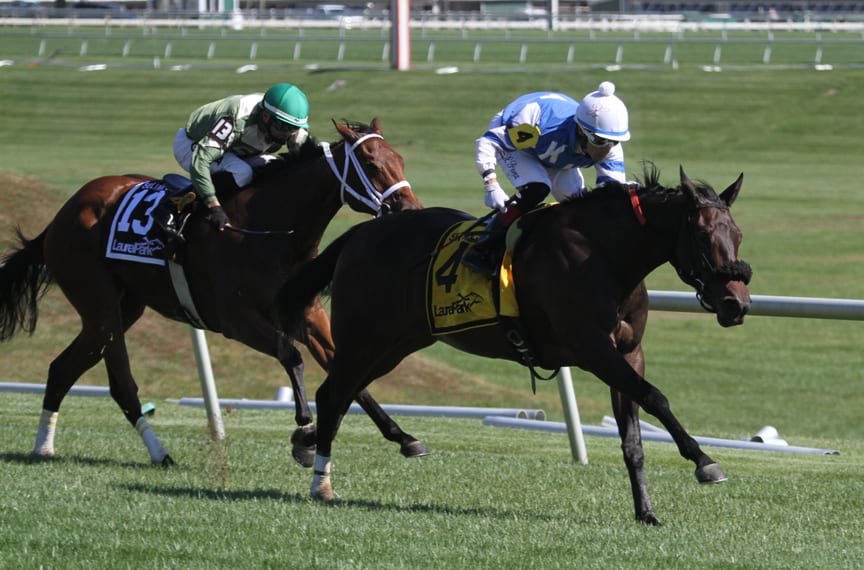 Miss Bullistic powered home to win the Selima in 2014. Photo by Laurie Asseo.

Smith will saddle a horse in each of the next three races that follow, including Lionhearted Lady in the $60,000 All Brandy Stakes at nine furlongs on the grass and then, after a one-race reprieve, he will return to the paddock to send out Talk Show Man in the $60,000 Find Stakes, also at one-mile and one-eighth on the Laurel lawn. Last year’s Maryland Million Turf champion when he upset Ben’s Cat, who is expected to rule as the odds-on choice in the $60,000 Mister Diz in the first of the four stakes on the card, Talk Show Man will look to live up to his billing as the 9-5 morning line favorite when he faces 11 rivals in the Find, including Roadhog, another one-time conqueror of Ben’s Cat.

Earlier this year, Talk Show Man dazzled in winning an allowance on the Laurel main track before scoring gamely on the turf in the Henry S. Clark Stakes at Pimlico.  But he has been well beaten in each of his last two starts.

“He’s done okay for us this year and he’s been training really well coming into this race,” Smith said of Talk Show Man, who has won twice in four starts and earned nearly $100,000 this year. The five-year-old Great Notion gelding owns a solid 6-7-5 slate and career earnings just shy of $300,000 from 21 lifetime tries. “He won his first two starts this year, so we thought he could develop into something nice. We tried him in the [Grade II] Dixie at Pimlico and that race came up really tough. Then we took him to Delaware Park [for the Cape Henlopen] and he just never fired. I think the six weeks off in between are going to benefit him in the long run. I think he’ll run well this weekend. I like the way he’s been training for this race.”

Saturday’s Maryland Pride day at Laurel Park will help Smith and fellow trainers get a gauge on where their respective horses are heading into the lucrative stakes-filled card at Laurel on September 19 and then the Maryland Million Day four weeks later on October 17. Neither Laurel nor Colonial Downs offered live racing last summer, forcing Smith and his contemporaries to ship elsewhere or simply not run at all. But the eight-week summer meet at Laurel capped by this Saturday’s Maryland Pride card proved to be a rewarding endeavor.

“It was great being able to run here this summer,” Smith said. “We were finally able to use this great turf course that we have here. Going three days a week and eight races a day didn’t give us a lot of options, but the purses stayed high. When you start adding races, you start thinning out the purses a little bit. I think we were able to find a balance this summer. Saturday is going to be a busy day, especially for me because I have nine in, but at least we’ll be right at home when it’s over.”