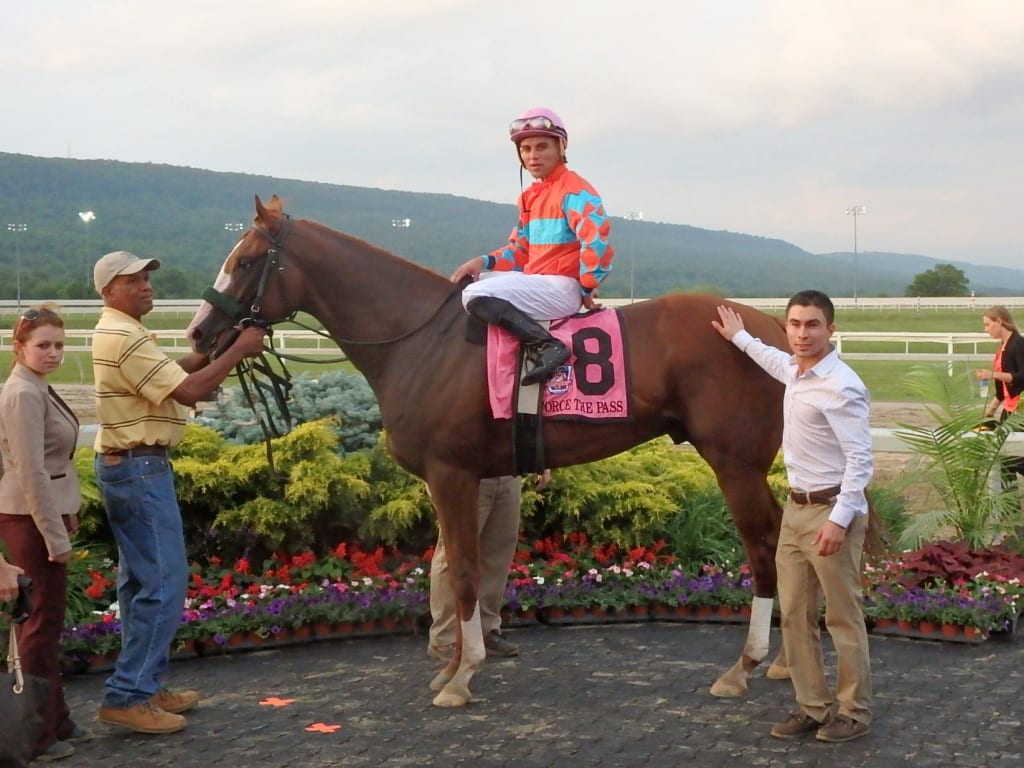 Force the Pass following his win in the G3 Penn Mile. Photo by The Racing Biz.

While Force the Pass’s recent success — including wins in the Grade 1 Belmont Derby Invitational and Grade 3 Penn Mile, both on the grass — might seem to a handicapper to have come from nowhere, a pedigree analyst might well have held a different opinion.

The nicely bred runner (Speightstown – Social Queen, by Dynaformer) was 9-1 in the Penn Mile and 10-1 in the Belmont Derby but won both with a sharp late turn of foot to improve his overall record to four wins and two seconds from six starts with earnings of $1,030,084.

The first glance at the pedigree of Force the Pass reveals a sire, Speightstown, known for consistently throwing sprinter speed over a very lucrative, dominant female line.  The second fact that jumps off the page is the 4 x 5 x 5 crosses of “the perfect horse,” Secretariat, all through daughters.

There is also a noticeable buildup of Bold Ruler in the pedigree.  But the breeder of this horse, Colts Neck Stables, did not miss the deeper pedigree play at hand, which is no surprise. Colts Neck Stables are perennial breeders of graded stakes winners as a result of sound breeding principles.

After Bold Ruler, the next factor in the pedigree of Force the Pass is the increasingly prevalent cross of Roberto and Buckpasser, which is visible in the five-generation pedigree and is a culmination of the build-ups of Agnes (discussed further below), coupled with sex-balanced crosses of Man O’ War and Blue Larkspur. To give you a glimpse into the potency of the Roberto / Buckpasser cross, five of Kitten’s Joy’s six 2013 Grade 1 winners were from mares that returned Roberto and Buckpasser back to Kitten’s Joy.

American breeders are, more often than not, taking mares with ample amounts of La Troienne and adding even more of her and her accomplices. In the case of Force the Pass, the reverse happened. Force the Pass only has a single line of La Troienne, but not to worry — her band of accomplices, those horses whose presence in a pedigree seems to amplify the impact of La Troienne’s, is in plentiful supply.  At the core are various members of the Agnes family, also known as family 16 in the identification system popularized by late 19th century Australian pedigree researcher Bruce Lowe.  First dam Social Queen owes her dominance as both a runner — she won multiple graded stakes on the grass — and producer to that family.

That’s hardly the only presence of family 16, however.

La Troienne herself is the product of the full brother / sister cross of Ormonde and Ornament, he the sire of Orme, she the dam of the immortal Sceptre, who is the tail-female ancestress of Buchan, who is present no less than six times. Buchan commonly appears through Roman but has additional sources in this mating. The 2nd damsire of Force the Pass, Irgun, also traces tail-female to Ornament. Add another 2 lines of Ornament for each line of Hail To Reason, who also carries Martagon and a double of family 16 heavyweight, Plucky Liege.

It should be noted that Ormonde’s blood is nearly everywhere but seems to require the support of his sister Ornament and other relatives to have a significant impact on a mating.  A little help from Olympia (brought in via Dynaformer) has also shown to be of a major help to La Troienne.  Among the recent evidence: California Chrome, American Pharoah, Pharoah’s sire Pioneerof The Nile, Gr. 1 Wood Memorial winner Wicked Strong, and any number of stakes winners by Distorted Humor from mares packing La Troienne.

Re-focusing our attention back to family 16, Ormonde and Ornament have close kin in Martagon and Kendal, and have other family members Desmond, St. Angelo, Sardanapale, Plucky Liege and her trio of sire sons (Admiral Drake, Bull Dog, and Sir Gallahad), and Papyrus, the damsire of Princequillo and 2nd damsire of Ribot, both known stamina influences. Argentine breeders have long been keen on the blood of Agnes, mainly through Kendal and St. Angelo, the latter being the 3rd damsire of Asterus and also the damsire of the damsire of Blue Larkspur.

Secretariat himself is the result of a build-up of family 16, as well as build-ups of family 23-b, the family of the legendary Domino, via Discovery (damsire of both Bold Ruler and Native Dancer). Bold Ruler was by Nasrullah, who was out of a mare by Blenheim II, who featured Martagon. Being out of the Princequillo mare Somethingroyal added Papyrus to the family 16 mix in Secretariat.  Of course, not all Princequillo mares are made equal. Somethingroyal was uniquely out of a mare by Caruso, who featured another line of Martagon.  Secretariat’s affinity for La Troienne is only natural, given the build-ups in both quantity and variety of family 16. A.P. Indy is the flag-bearer for this affinity.

Colts Neck Stables counts recent 2012 Gr. 1 Preakness winner Oxbow, multiple Gr. 2 winner Fed Biz, and Gr. 2 winner Casino Host among their other recent produce. We can learn a lot from breeders who are consistently successful if we take the time to study their methods. Fortunately, the pedigree blueprints of horses like Oxbow, Fed Biz, and Force the Pass are right there in front of us.

Check out Force the Pass’s pedigree.