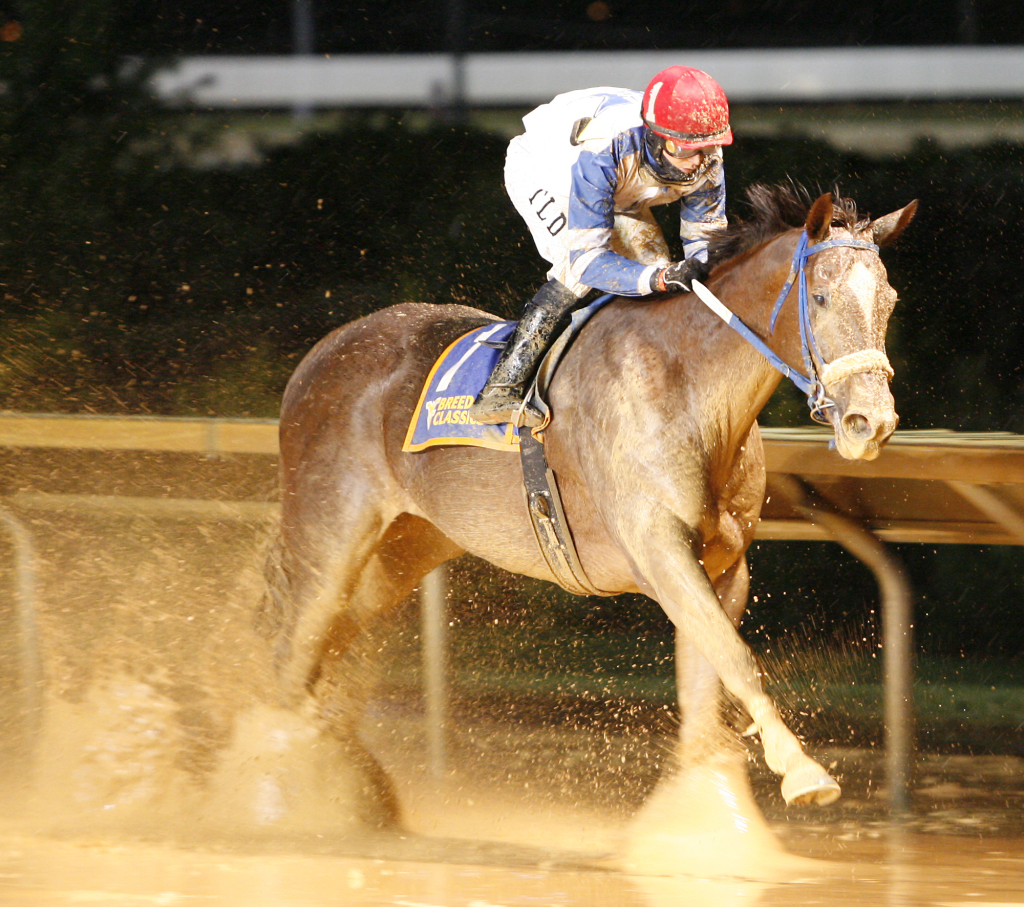 Russell Road, pictured, is favored in Saturday’s Frank Gall Memorial Stakes at Charles Town, but Hidden Canyon and Lucy’s Bob Boy both figure to get plenty of betting action. Photo by Jeff Brammer.

For the last several years, nine-year-old Russell Road and six-year-old Lucy’s Bob Boy have been the faces of West Virginia-bred colts and geldings, and who can fault that? The two have combined to win a staggering 53 races while banking nearly $3 million in career earnings and taking three of the last four West Virginia Breeders’ Classics.

Now, however, a third runner seems poised to join the top two as Phyllis Susini’s Hidden Canyon takes his first shot at Russell Road and Lucy’s Bob Boy in Saturday night’s Frank Gall Memorial at Hollywood Casino at Charles Town Races. The Frank Gall Memorial will be the seventh race on Charles Town’s Saturday evening card and is set to go off at 9:55 P.M. EST.

Trained by Javier Contreras, the five-year-old Hidden Canyon comes into the Gall riding a seven race winning streak and made a victorious return from a layoff of more than a year on July 22 when he took an allowance race by 5 3/4 lengths and earned a Beyer speed figure of 91 in the process. His last start had come in June of his four-year-old campaign when he won an allowance race with a career best Beyer of 92.

“He had a little issue with his suspensory,” said Contreras. “He healed up good and when we got him back in training, he got a little hot again so we had to stop on him until he healed up completely.”

While he believes his horse is at the top of his game and hopes his patience is rewarded, Contreras also believes this to be the strongest West Virginia bred stakes race he’s seen outside of a Breeders’ Classics event.

“It’s really strong,” said Contreras.  “Russell is the man. He’s older but I saw him work the other day and boy did he look good. And Lucy – he’s as honest as the day is long.”

Despite his sire Fiber Sonde being a half-brother to Eclipse Award winning sprinter Speightstown, Contreras hopes the Gall will lead to a start in October’s $500,000 West Virginia Breeder’s Classic at 1 1/8 miles.

“If all goes well this weekend, the plan would be to stretch him out to a mile after this and point towards the mile and an eighth Breeders’ Classic.”

Hidden Canyon’s regular rider J.D. Acosta will be aboard once again on Saturday night.

Despite being a nine-year-old, Mark Russell’s Russell Road has shown few if any signs of slowing down at this stage of his career with a win and a second in his two starts this year. Judiciously managed by Russell and trainer James W. Casey, Russell Road is following the same path as in previous years with a handful of selected races all designed to get the horse to his seasonal goal of the West Virginia Breeders’ Classic – a race he’s won three times.

In his first start of the year, Russell Road fired fresh off the bench as he often does, winning the Confucius Say on Charles Town Classic day with a Beyer of 93. Most recently, he dropped a narrow defeat in an allowance race at Mountaineer Park on June 8.

The seven furlong Frank Gall affords Russell Road the opportunity to get back to what’s been his bread and butter distance over the course of his career. He’s made a total 18 career starts going two turns at Charles Town in restricted company and has failed to hit the board only once with that coming in a previous effort in the Gall – an effort that came half a decade ago.

While he comes into the race as its two-time defending champion, Michael Furr’s Lucy’s Bob Boy will need to not only get past Hidden Canyon but also turn the tables on Russell Road who has finished ahead of the Sandra Dono trainee in their last two matchups – the last coming in the Confucius Say.

Following a stretch that bridged his three and four-year-old campaigns and produced 13 wins in 15 starts as well as three triple digit Beyers, consistency has been tough to come by for Lucy’s Bob Boy. After starting his career with 15 victories and just one off the board finish in 19 outings, the gelding’s subsequent 19 starts have produced nearly as many finishes worse than third (7) as they have wins (9). Most recently, Lucy’s Bob Boy broke a two race losing streak by winning a handicap over the Charles Town oval on July 15.

Jevian Toldeo, who won the 2014 Charles Town Oaks (G3) on Miss Behaviour, has the mount on Lucy’s Bob Boy for the first time.