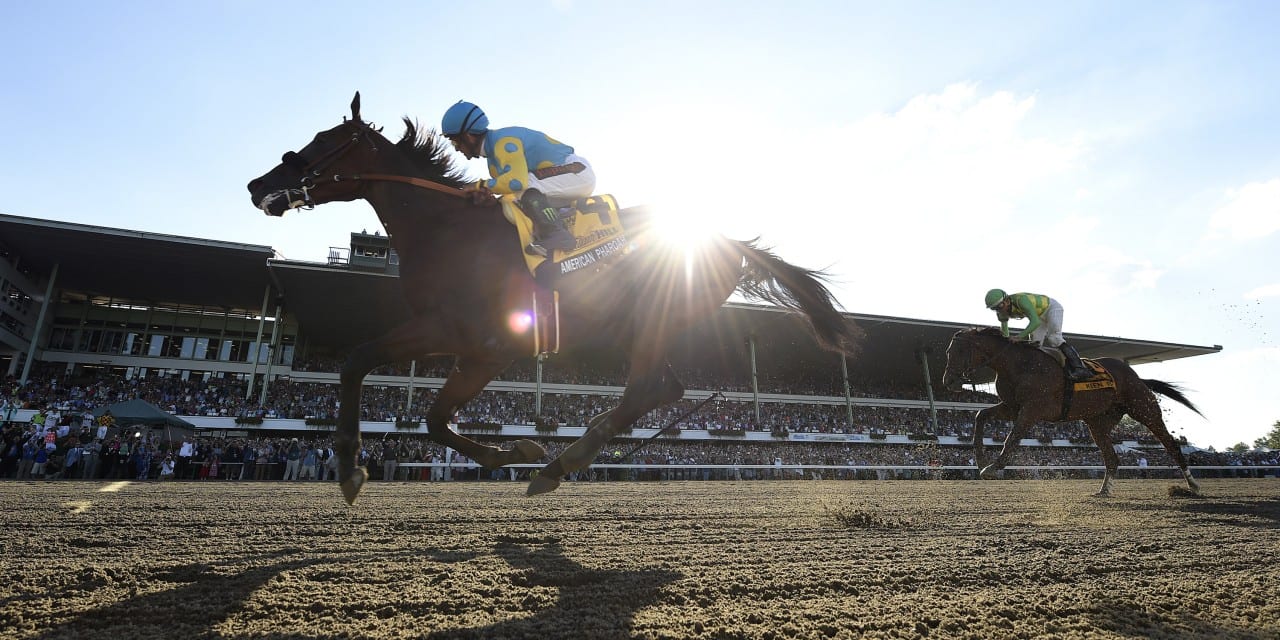 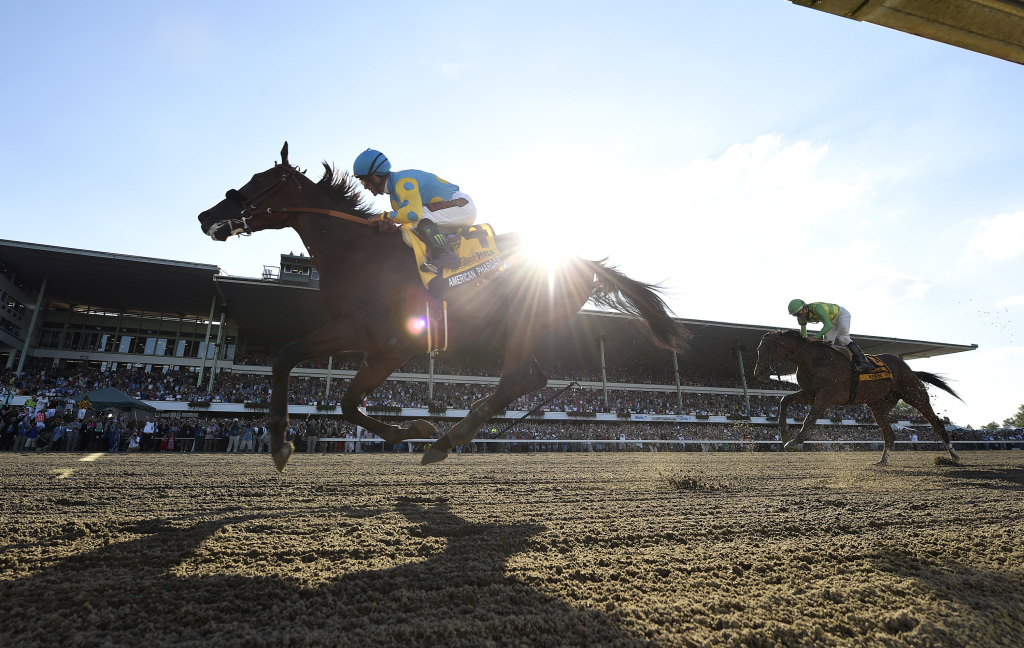 American Pharoah gave a record Monmouth crowd what it came for in romping to victory in the Haskell. Photo By Melissa Wirth/EQUI-PHOTO.

A record crowd of 60,983 jammed graceful old Monmouth Park on Sunday to witness a sight not seen since 1979: an American Triple Crown winner racing.

They came by the busloads to Oceanport, NJ to see American Pharoah make his first start since his June date with history at Belmont Park, and they bet him like the surest of sure things in the Grade 1 William Hill Haskell Invitational, all the way down to 1-9 on the toteboard.

Still, all of that was merely the appetizer.

Before the race, Bode Baffert, the young son of Pharoah’s trainer Bob Baffert, bounced eagerly — nervously? — from foot to foot awaiting the start.

Afterwards, owner Ahmed Zayat, who himself admitted to great nervousness prior to the race, had the chance to high-five the fans and celebrate the easiest of easy victories.

“It’s very rare that I’m speechless, but I’m just very proud,” said a visibly emotional Zayat afterwards, a New Jersey resident savoring a victory on his home turf.  “This horse is a superstar.  He has touched everybody’s heart.”

He has, indeed, and he did it once again Sunday against a modest group in which Pharoah was the lone Grade 1 winner.

American Pharoah, a brown son of Pioneerof the Nile who does very little wrong, broke alertly and quickly assumed a stalking second a length or so off Competitive Edge, who tugged the field through a quarter mile in 23 1/5 seconds and a half in 46 seconds flat.

Nearing the half-mile pole in the 1 1/8 mile event, Upstart, the second favorite, moved inside of Mr. Jordan to take third place.

Aboard American Pharoah, Victor Espinoza bided his time before moving forward to confront Competitive Edge midway on the turn.

“Turning for home, I looked around… the one in front [Competitive Edge], he was struggling,” Espinoza explained.  “He [American Pharoah] was just having fun in there.  We were both having fun.”

Straightened away, American Pharoah immediately spurted well clear of the faltering Competitive Edge.  Upstart continued to toil without making up any ground.

The stretch run was more procession than contest.  Espinoza sat motionless aboard American Pharoah, while the other jockeys implored their horses for everything they had.  Stride by graceful stride, American Pharoah reinforced the message: this is a superior racehorse.

Keen Ice, who ran willingly into third in the Belmont Stakes, rallied smartly in the late stages to grab second, 2 1/4 lengths behind the winner, but he never posed a true challenge.

No one did, and after eight consecutive victories, seven in Grade 1 company, and all but one of them by at least today’s two-and-change margin, it’s an open question as to who, if any runner, can.

Certainly, none of today’s runners seems to measure up.  It was another three lengths back from Keen Ice to Upstart, who easily held third.  Competitive Edge, who led through three quarters in 1:09 3/5, faded to fourth.  Running time for the nine furlongs was a sharp 1:47.95.

The future isn’t promised to any of us, and Zayat and Baffert both declined to name a next target for the nation’s most popular racehorse.  Tracks — among them Del Mar, Saratoga, even Canterbury — have jockeyed to find creative ways to sweeten the financial pot to lure him.

Zayat did promise one thing, though.

“The horse will come first,” he said, adding, “We are very excited to continue to race him.”