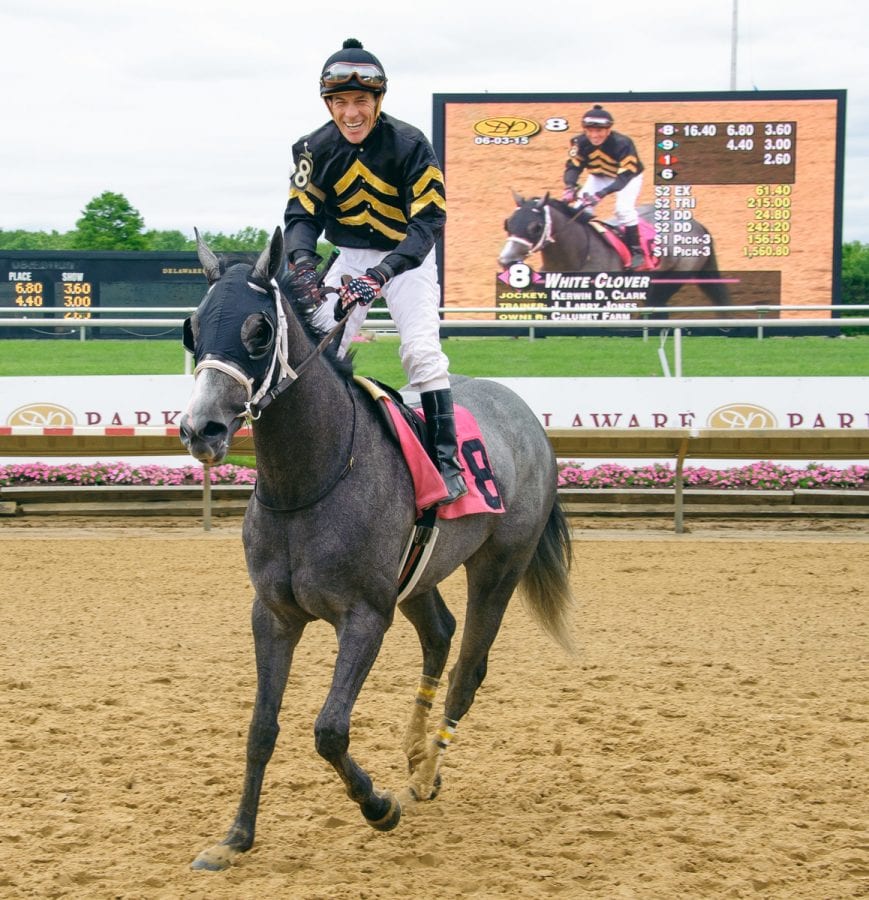 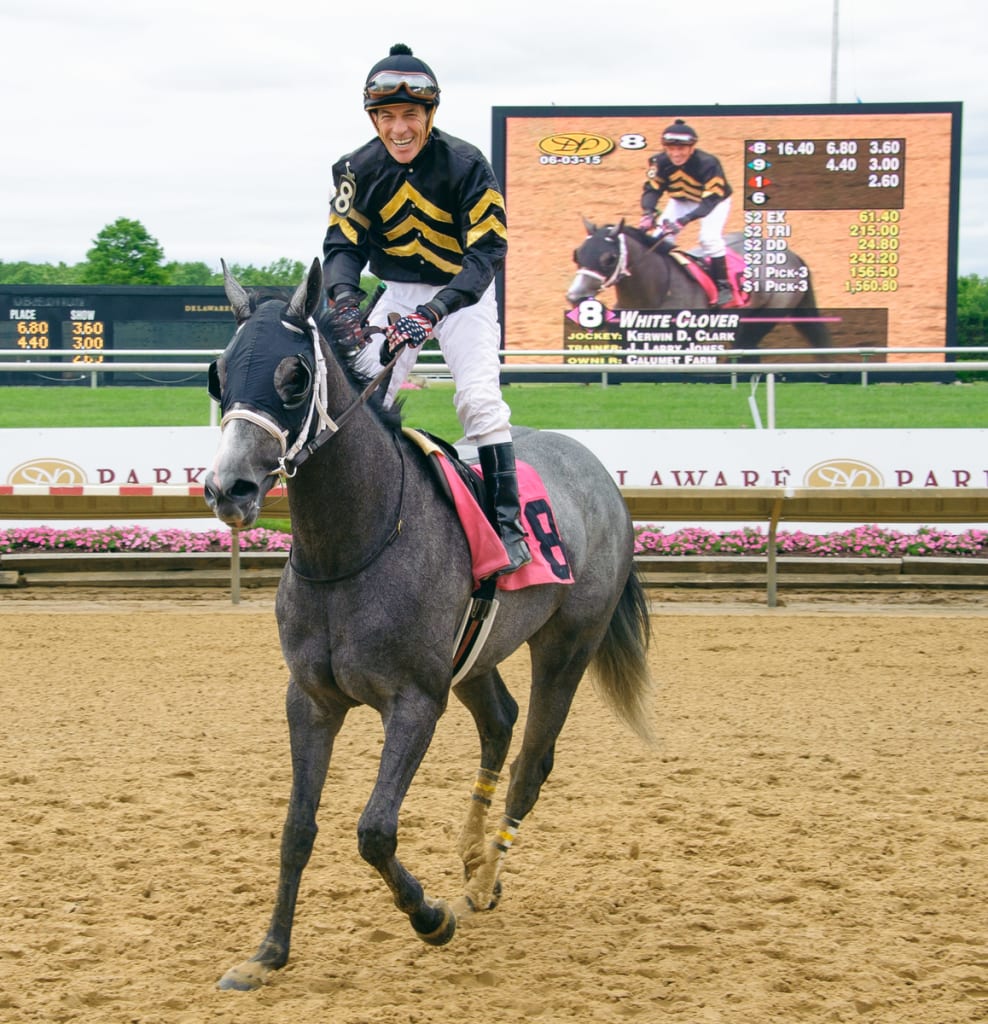 White Clover won the Our Mims at Delaware Park for trainer Larry Jones and is 5-1 in the morning line for Satruday’s Delaware Oaks. Photo by HoofprintsInc.com.

Locally-stabled Lovely Maria, the recent winner of the Kentucky Oaks, tops the $300,000 Grade III Delaware Oaks this Saturday.  The mile and a sixteenth affair has attracted a field of eight.

In her last start, Lovely Maria posted a 2 ¾-length triumph in the Kentucky Oaks at Churchill Downs on May 1.  Previously, the daughter of Majesticperfection owned by the former Governor of Kentucky Brereton Jones, notched a 3 ¼-length score in the Grade I Ashland Stakes at Keeneland on April 4.

“She is here and she is ready to go,” said trainer J. Larry Jones.  “Everything looks good right now.  I am not saying we got her cranked up to 110% or anything, but surely we think she is ready and good to go.  We are ready to kick off the second half of the year campaign starting right here.  From here, we are thinking the Alabama and from the Alabama, if we are still doing well, we are just going try to figure out how to get to the Breeders’ Cup.”

In her other two outings this year, the Kentucky-bred conditioned J. Larry Jones finished second in the Grade III Rachel Alexandra Stakes and won a $50,000 allowance.  Both of those races were at the Fair Grounds.

Team Jones, Brereton and J. Larry, have won the Delaware Oaks before with another former Kentucky Oaks winner.  The pair teamed up to win the race with Proud Spell, who was the eventual 3-year-old filly champion of 2008.

“That is why he (Brereton Jones) wanted Lovely Maria in this race,” Jones said.  “This path worked for us in the past and we are hoping we can get the same results.  After winning the Kentucky Oaks, Proud Spell used the Delaware Oaks as a springboard before winning the Alabama and then eventually the Eclipse Award.”

Like Proud Spell, Lovely Maria broke her maiden at Delaware Park as a 2-year-old and went on to win a Graded race.  Since 2002, there have been 32 2-year-olds who have broken their maiden at Delaware Park which have gone on to win Graded races.  Jones has trained 11 of those including Eight Belles, Believe You Can, Friesian Fire, Hard Spun, Havre de Grace, Joyful Victory, Mark Valeski, Mr. Bowling and Old Fashioned.  Others Jones has not conditioned include:  Afleet Alex, Barbaro, Bellamy Road, Forever Together, Pants on Fire, Ruler on Ice, Tapit and Union Rags.

“I think Delaware Park plays a very significant role in the development of good young horses,” Jones said.  “Delaware Park has such a kind track for horses to train on.  You can get them ready here without getting them hurt and we come out of here with sound horses.  And usually, they do not have to run their eye balls out in their very first race in order to win and you still have plenty of horse left.  That has been the biggest thing with our really nice horses like Hard Spun, Eight Belles and so many of them.  It is kindest of the tracks, it has a horse friendly atmosphere, and in the first start you do not over use them.  Those factors have been instrumental in developing all of them.”

Lovely Maria has a career record of four wins and three seconds from eight starts with earnings of$973,000.

Larry Jones has also entered Calumet Farm’s White Clover.  In her most recent, the Kentucky-bred daughter of Exchange Rate posted a 1 ½-length in the Our Mims Stakes at Delaware Park on June 3.  She has a career record of three wins, two seconds and a third from eight starts with earnings of $102,830.

“White Clover won the prep for this race and she is doing great as well,” he said.  “I have been really happy with her as well and she is coming into the Oaks great.  Which one is the best? I do not know. We are just going to have to find out on Saturday.  We had a little trouble with White Clover early in her career in getting her to do things the way we wanted her to do them.  She did not want to rate and she wanted to be more of a speedster. She runs on the front end, but she is starting to be able to relax a lot better which showed in her last race.  She showed she could come from off a five furlong race and win going a mile and seventy in her next start which shows she is pretty versatile.  The great thing about that five furlong race was that they went so fast in that race, that she had to come from off the pace.  In the Our Mims, she was the fastest horses, but she relaxed a lot better.  She will rate here Saturday and she will be very formidable.”

Since the Delaware Oaks was brought back to the stakes schedule in 1997, the race has produced five eventual winners of the Alabama Stakes (Blind Luck, Careless Jewel, Proud Spell, Island Fashion, and Runup the Colors), two 3-year-old filly champions (Proud Spell and Blind Luck) and one Horse of the Year (Havre de Grace).  Six Hall of Fame filles have placed in the race.  They are: Desert Vixen, Gallant Bloom, Dark Mirage, Cicada, Silver Spoon, and Gallorette.