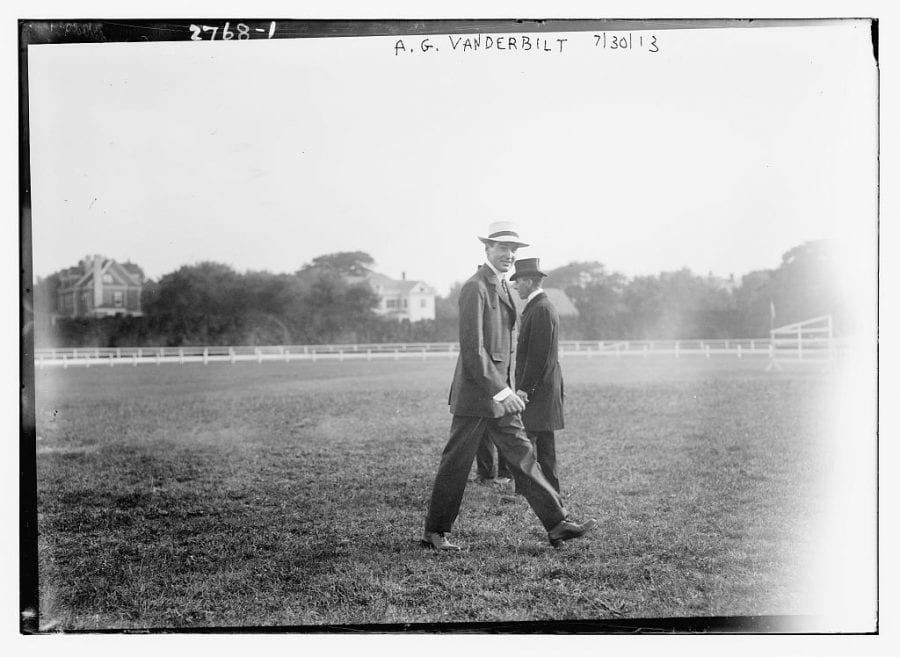 Alfred Gwynne Vanderbilt — Alfred III’s grandfather. Alfred II will enter racing’s Hall of Fame in August as a Pillar of the Turf. Photo courtesy of the Library of Congress.

On May 7, Alfred Vanderbilt III was in Ireland, honoring the memory of his grandfather, a man he never knew, on the 100th anniversary of the sinking of the Lusitania, in which Alfred Gwynne Vanderbilt perished, saving the lives of his fellow passengers.

Exactly three months later, he will attend a happier event in Saratoga Springs, honoring the memory of his father, as Alfred Gwynn Vanderbilt II is inducted into the National Museum of Racing’s Hall of Fame, as a Pillar of the Turf.

The eldest Vanderbilt was on his way to England to attend a meeting of the International Horse Breeders’ Association; a devoté more of coaching than of flat racing, he died before he could, in any active way, pass on his love of equine sport to his son, who was a toddler when the Lusitania was sunk.

“My dad didn’t really remember his father,” said Vanderbilt last week from his Connecticut home. “But I’m sure that he grew up with his father as a kind of constant mythos.”

That myth didn’t stop with the next generation.

“From the earliest age, I remember my grandfather’s portrait at my father’s house,” Vanderbilt recalled. “I asked, ‘Who is that man?’ and I remember being told the story, about how this great ship sank, and that he gave his life preserver to a woman, even though he couldn’t swim. So I had this great hero image to aspire to. He was the hero of our family.”

And indeed, to the people on the Lusitania.

“People will not talk of Mr. Vanderbilt in future as a millionaire sportsman and a man of pleasure,” said a fellow passenger, quoted in the New York Times. “He will be remembered as the children’s hero and men and women will salute his name.”

Alfred III’s own father was a different kind of a hero, a man whose leadership in the sport of Thoroughbred racing—as a breeder, an owner, an executive—spanned seven decades, several states, and multiple racetracks.

The National Museum of Racing instituted the Pillars of the Turf category for the Hall of Fame in 2013, inducting two new members each year. That Vanderbilt II will be inducted in the third year of the honor speaks to his legacy.

“The Pillars of the Turf category is designated to honor individuals who have made extraordinary contributions to Thoroughbred racing at the highest national level,” reads the press release announcing his induction. “Candidates must be deemed to have represented the sport with indisputable standards of integrity and commitment through disciplines such as breeding and ownership, leadership, innovation, philanthropy, promotion and education.” 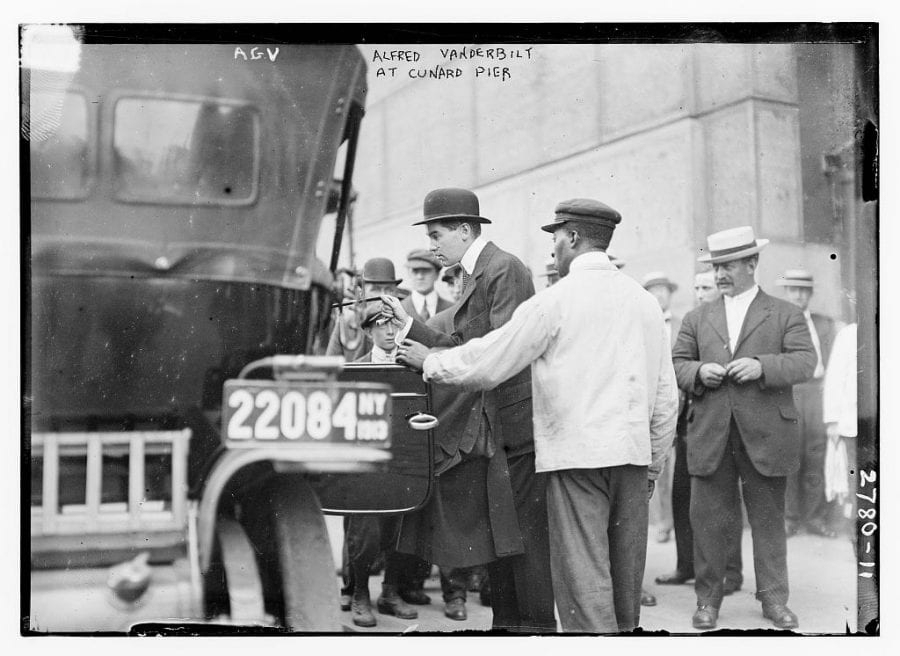 Alfred Gwynne Vanderbilt at Cunard Pier, 1913. Photo courtesy of the Library of Congress.

Vanderbilt II became president of Pimlico at an age at which today, he’d be too young to drink. A year later, at age 21, he was given Maryland’s Sagamore Farm by his mother, and it was there that he bred Native Dancer, and from there that he was elected to The Jockey Club, and that he arranged the famous match race between Seabiscuit and War Admiral in the Pimlico Special.

A few years later, Vanderbilt II turned his attention to Belmont Park, where he oversaw the beginning of pari-mutuel wagering, wresting control of betting from bookmakers.

“He really did work for the fan,” said his son. “He tried to get things done that would make the experience of the customer a great experience.”

Vanderbilt II was awarded an Eclipse Award of Merit in 1994, and Vanderbilt III recalled that his father’s speech was about three sentences long.

And that product, said his son, were the races themselves, and the horses, something Vanderbilt II suggested in a statement quoted in his 1999 New York Times obituary.

“Horse racing was once a contest, a sport,” reads the comment.  “The only thing that’s important now is the betting, the revenue.  They even open the track for betting now when the horses are running someplace else.  If they keep doing that, they’ll skip the horses entirely.”

He felt so strongly about that, said his son, that he asked to have the video monitors removed from his box at Saratoga.

“He said, ‘You don’t want anything between you and the product. You have to see the product.’”

Chosen four times by the New York Turf Writers’ Association as the man who did the most for racing, Vanderbilt II often brought his son to the track, but kept him at a distance from the family business.

“He didn’t want me to be involved,” explained Vanderbilt III. “And I can honor that. He said, ‘It’s my world, and I really enjoy having it be my world. I love having you come and see it, but I’d prefer if you pick another career.’

So his son went into public relations, at first working in the big New York City firms like Carl Byoir and Hill+Knowlton before venturing out on his own, working primarily with non-profits. He makes his home in Connecticut and seldom gets to the races, though he had a featured role in a 2013 public television documentary on the 150th anniversary of racing at Saratoga, and he continues to pay attention to the sport. (Disclosure: the author was also featured in the film.)

He watched the Triple Crown, pleased to see that it was won, after years of talk about changing the series, and he imagines that his father would be enjoying the spotlight on the sport.

“He never thought much of the Breeders’ Cup and said that he wouldn’t nominate his horses to it,” said Vanderbilt, “but he always felt that the Triple Crown was important, that those races should stand out.”

He came to close to winning it with Native Dancer, who suffered the only loss of his career in the Kentucky Derby, closer than most people ever get. After that campaign, Vanderbilt II swore off racing, saying that he’d raced the best, but after a hiatus, he came back, unable to stay away from the sport or the animals, the love of which had been a part of his family for generations.

On August 7, Vanderbilt III and his brother will be in Saratoga to see their father take his place with Thoroughbred racing’s luminaries, in the same year that their grandfather is remembered for a type of war-time heroics. He hasn’t yet begun to think, too much, about what he’ll say, but he does know one thing.