Cancer-free, trainer Lynn Ashby sees “so much more” ahead 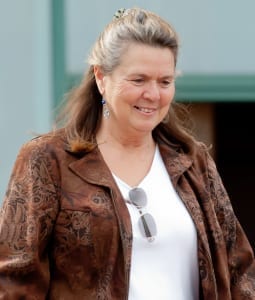 Lynn Ashby in 2013. Photo by HoofprintsInc.com.

Early last spring Lynn Ashby’s days seemed full. Her daily schedule included not only training her own stable of thoroughbreds and Arabians but also breaking horses for other clients and fulfilling her obligations as the manager of Middletown Training Center.

That all changed on on April 4, 2014, when her doctor gave Ashby the news all too many women receive every year in the U.S. She had contracted invasive breast cancer.

The shock of the news was, she recalled, “like a bolt of lightning.” But once the initial shock subsided Ashby did what she has always done throughout her life.

“I got all the information I could find, educated myself, then organized a plan to handle the problem,” she explained.

Three weeks after the diagnosis, on April 26, Ashby underwent at mastectomy, and a month after that the trainer began a program of chemotherapy. She took chemo treatments every three weeks from May until two weeks ago, and also had to undergo colon surgery.

Ashby admits the treatments were “hell” at the time but said she had great support from family and friends, most notably her daughter Lynette. “Lynette not only helped with the horses but she is studying to become a nurse and she was so helpful over the past year I can’t begin to tell you,” Ashby said. “She was a Godsend.”

Ashby was finally pronounced cancer free following her final chemotherapy session and has been slowly returning to her duties on the farm. After returning from a trip to Poland for an Arabian horse conference, she’s been going out during training hours regularly for the first time since her diagnosis. Now her thoughts center not around her illness but around her duties at the training center and the development of some of the young thoroughbreds she has high hopes for this season.

Ashby took over as manager of the 500-acre Middletown Training Center, which has 80 stalls on the grounds, two years ago. Since she took over a new surface has been put down for the six furlong dirt training track. Last winter the farm broke 74 yearlings for such trainers as John J. Robb, Gary Capuano, King T. Leatherbury, Mark Shuman, Bruce Levine and others. She says watching young horses develop is among the most rewarding things in her life.

“To see horses we’ve had on the farm go to the races and win is a thrill I can hardly describe,” Ashby said. “Last week one of our ‘graduates,’ Patrick Rocks, won at Pimlico and today (Thursday) another horse who we broke here, Distorted Beauty is running in a $150,000 stakes (The Intercontinental) at Belmont. I told her owners (Bloodlines Racing Partnerships) that she really loved the turf down here (the training center has 1 1/16 mile turf course). After she ran fourth on the dirt first time out Bruce (Levine, her trainer) put her on the turf and the rest, as they say, is history.”

Distorted Beauty ran third in the Intercontinental and has won five of 10 career starts with more than $289,000 in earnings.

“And we’ve got some nice youngsters for our own owners,” the trainer added, “I really think a 2-year-old named Kancamagus could be a nice one. He’s a half brother to Firing Line by Bellamy Road and he’ll be coming to the races later this summer. John (Robb) and Mark (Shuman) also have some nice babies who you’ll be seeing soon. It’s a great time of the year, watching these youngsters develop and move forward. It’s nice to see a horse start to show the talent in their development that makes you think will have a bright future.”

As for bright futures, a now healthy Ashby sees one for herself, too. Her age, she said, is “64 — and there’s so much more!”