Virginia is for (Belmont) lovers 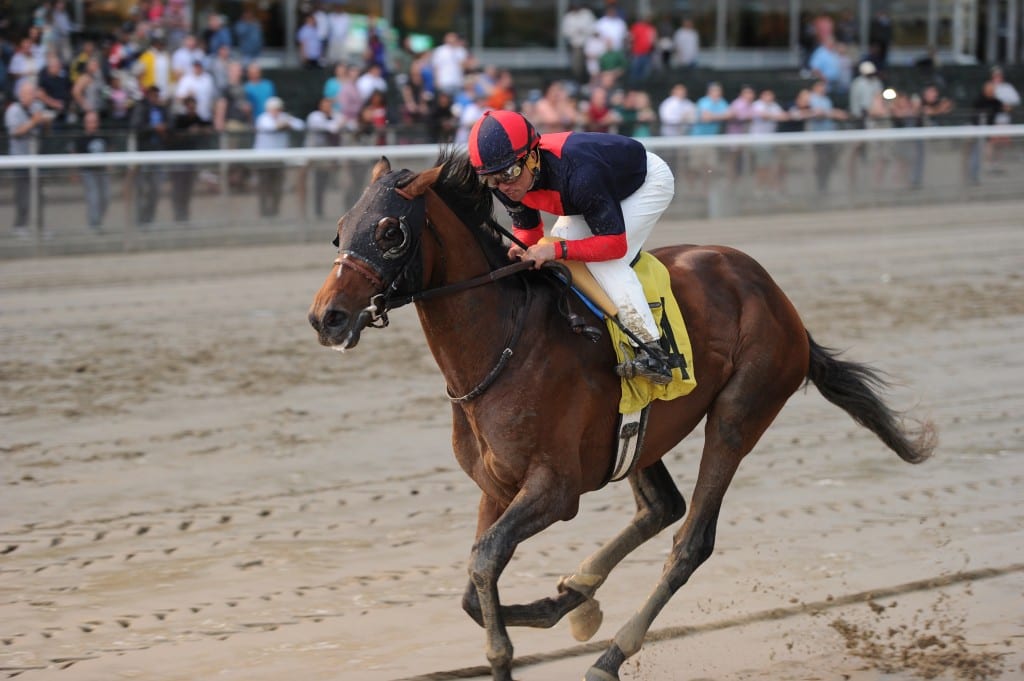 Tonalist, here winning the Peter Pan, is one of many Virginia-connected horses to earn Belmont laurels. Photo by NYRA/Chelsea Durand.

Virginia may be for lovers — and I may love New York — but when it comes to thoroughbred racing, there’s more connecting those heart-filled tourism campaigns than you might think. Together, they spread many hearts across bumpers and billboards in the 1970s.  The biggest of those hearts — literally — might have been Secretariat’s, but he certainly wasn’t the only Virginian to give Belmont love.

For two centuries, Virginians have sent their horses north for big matches. In the 1820s, Sir Henry was shipped to Long Island’s Union Course to face American Eclipse in the immensely popular North-South races that drew 60,000 to 70,000 fans, not much smaller than the crowd expected for the Belmont Stakes on Saturday.   The pilgrimages continued at now defunct racetracks on Long Island when a few years after The Civil War, a stakes race was begun that would become the Belmont Stakes.

Eleven Virginia-breds have won the Belmont, starting with Algerine in 1876, more than any state other than Kentucky.

In one great stretch of less than a decade, four Virginia-breds visited the Belmont Stakes winner’s circle: Arts and Letters (’68), Quadrangle (’64), Sherluck (’61), and Sword Dancer (’59).  Except for Sherluck, who didn’t run in the event, the remaining trio also captured the Travers.  Paul Mellon’s Rokeby Stable sent Arts and Letters and Quadrangle.  Other Belmont Stakes winners branded as Virginia-bred include Phalanx (’47), Bounding Home (’44), and Pasteurized (’38).

Those were the gold ol’ days, when  Virginia horsemen advanced farther north than did Robert E. Lee, whose high tide at Gettysburg wouldn’t have gotten him a Penn Mile runner, let alone a trip to the Spa.

While technically a Kentucky-bred, Riva Ridge’s 1972 victory for the Chenerys served as a catalyst to bring on Secretariat for the Triple Crown drought-ending campaign in 1973.  The Virginia-bred’s 31-length Test of Champions win continues to stand another test, that of time.  The Meadow Stable knew the race well; Meadow silks were part of six Belmonts with seven horses.

Coming off his Preakness win, Hansel captured the Belmont Stakes in 1991 and still enjoys his days at Upperville’s Lazy Lane Farm at age 27.  Julie Krone became the first, and to date only, female to win a Triple Crown race aboard Herman Greenburg’s Virginia-bred Colonial Affair in 1993.

The Riva Ridge story — of a deeply Virginia-connected Belmont winner bred elsewhere — is one that’s recurred.

In 1979, William Perry Hagan supplemented Kentucky-bred Coastal to the Belmont Stakes for $20,000 after a resounding Peter Pan Stakes win.  Similar to Chenery, Hagan’s Waterford Farm near Middleburg acquired Coastal through a foal share agreement with Arthur Hancock. All Coastal did, of course, was derail Spectacular Bid’s Triple Crown train.

Even Colonial Downs contributed a Belmont verse with Victory Gallop.  Victory Gallop won a pair of stakes during Colonial’s inaugural season — the New Kent and, appropriately enough, the Chenery — both run on the dirt. Later, of course, Victory Gallop ran down Real Quiet on the money in the nearest of all Triple Crown near-misses, denying that runner the big prize by a nose.

Upstate, the Saratoga history is even more connected to the Old Dominion, with Paul Mellon’s Rokeby Stable, the Firestones, and the Augustuses and Van Cliefs. Mellon’s Sea Hero won just two of nine starts as a three-year-old: the Kentucky Derby and the Travers at Saratoga. His statue stands in Saratoga’s paddock.

Virginia-owned Dortmund made the boards in both the Preakness and the Derby.   Vienna resident Kaleem Shah’s large colt stabled with American Pharaoh for the first two legs of the Triple Crown but is taking this one off and getting a well earned rest.

Which means that, no matter how entwined those Virginia and New York hearts may be, there won’t be a Virginia interest in the Belmont this year.  While many will hope for something historic in Saturday’s Belmont Stakes, Virginia racing interests can ponder something they’ve always known.  It’s sure nice to have a horse in this race.