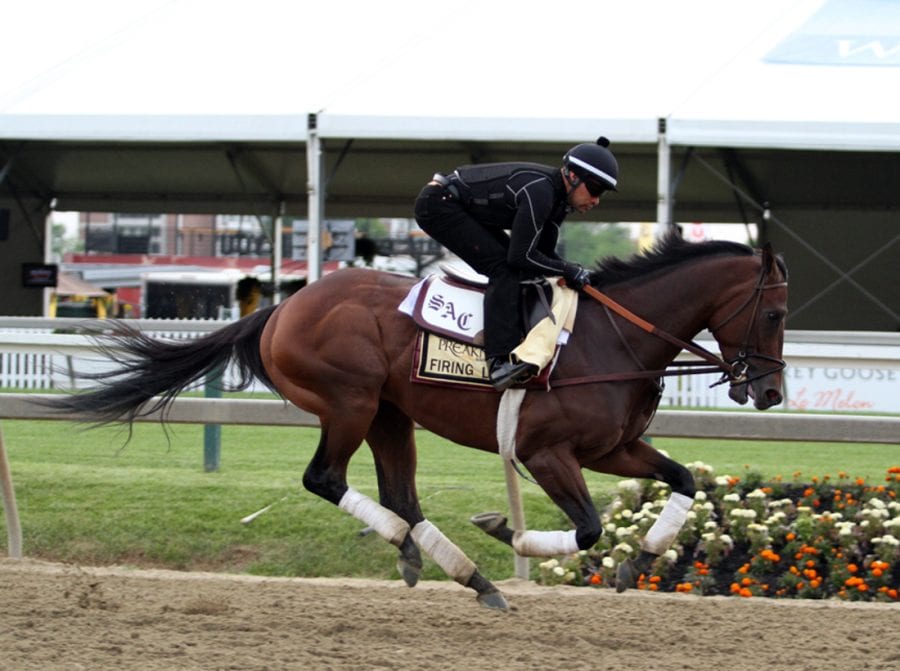 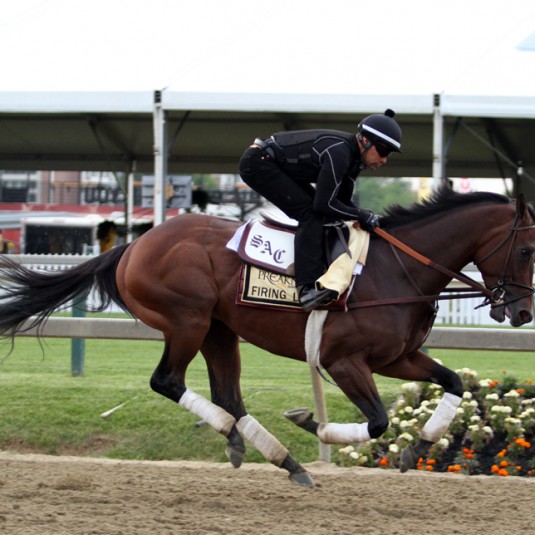 Firing Line on the track at Pimlico May 15. Photo by Laurie Asseo. 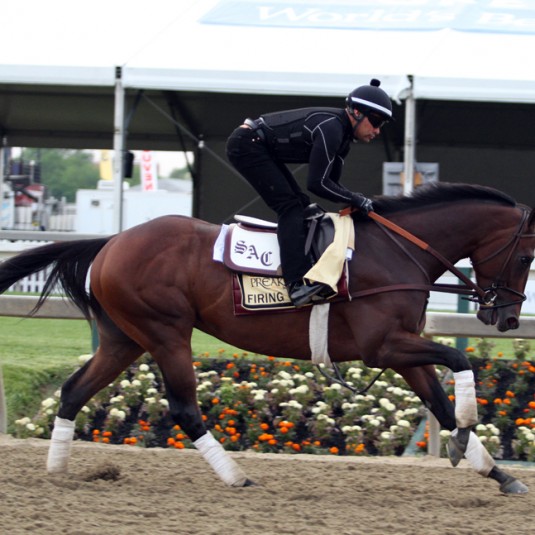 Firing Line on the track at Pimlico May 15. Photo by Laurie Asseo.

Who is Firing Line?

The valiant second place finisher in this year’s Kentucky Derby faces a rematch in the Preakness with Kentucky Derby winner American Pharoah and third place finisher Dortmund. In six starts, Firing Line has never finished worse than second, with his two wins coming in this year’s G3 Sunland Derby and in a maiden special weight race at Delmar in his two year old season. Firing Line finished second to nemesis Dortmund twice in the G1 Los Angeles Futurity and the G3 Robert B. Lewis at Santa Anita before turning the tables on him in the Kentucky Derby.

What they’re saying about Firing Line

According to trainer Simon Callaghan, Firing Line has “got a very good cruising speed during his races, and I think that should lend itself to a slight cutback in distance. I think this could be an absolutely perfect distance for him.” When asked how Firing Line came out of the Derby, Callaghan responded, “We really like the signs and signals he’s been showing us since the Kentucky Derby. He’s done everything we’d like to see. . .”

Jockey Gary Stevens echoed those sentiments, “He ate up everything the night of the Kentucky Derby . . .When they lick the bottom of [their feed cup] dry, that’s the best sight you can see, and he had it gone before 9:30 that night.” Stevens also said that Firing Line was “the first horse that I’ve ridden in the Derby that . . .was still a fresh horse. The outrider had to help me pull him up.” He concluded that Firing Line “has grown with each race” and “we like where we’re at.”

Firing Line’s tactical speed allows him to win on the front or from pressing the pace. Veteran jockey Gary Stevens, who has won the Preakness three times — in 1997 on Silver Charm, 2001 on Point Given, and 2013 on Oxbow — should be able to take full advantage of that tactical speed regardless of the post position he draws or the pace scenario that unfolds. If reports from his trainer and jockey are accurate, Firing Line came out of the Derby strong and ready to run. The slight cut-back in distance should be an added bonus.

Although he finally beat Dortmund in their last race, Firing Line’s record — four second place finishes in six starts — may suggest that he is a horse that likes to hang a bit and be a bridesmaid. In the Derby, Firing Lane did not switch leads in the stretch — a first for him in the three races in which Gary Stevens rode him — which almost assuredly cost him some speed in the final strides of the race