After 30 years, a forgotten Preakness worth remembering

Back in 1985, “Home of the Preakness” perhaps didn’t mean quite as much as it does today.

From the moment a horse crosses the finish line in the Kentucky Derby (and sometimes even before that), Triple Crown obsession begins. The racing world, in which few interested parties, from track executives to marketers to bettors, can agree, comes as close to consensus as it gets in hoping that a horse will sweep the Derby, the Preakness, and the Belmont for the first time since 1978.

But 30 years ago, the allure of the Triple Crown was less seductive, especially when the siren song of an unheard-of payday beckoned from New Jersey.

Destroyed by fire in 1977, Garden State Park re-opened its doors in 1985 after financier Robert Brennan spent nearly $200 million to re-build it. Opening day was April 1, 1985, and five days later, the track ran the Cherry Hill Mile for three-year-olds, an ungraded stakes race won by Spend a Buck—a horse aptly named for the man who’d spent millions to raise the profile of his racetrack.

The Cherry Hill Mile was the first step on a journey brazenly conceived by Brennan to attract attention—and money—to his re-born racetrack.

“We’d built this very upscale, glamorous place,” Brennan said recently from his home on the Jersey Shore. “In today’s dollars, it would be in the billions. We had this enormous investment in bricks and mortar, and we were determined to invest in the actors and actresses who put on the show, who would bring in the fans to spend their money.”

Though athletes’ salaries in 1985 had yet to reach the stratospheric levels of today, Brennan, who later served prison time on charges of money laundering and bankruptcy fraud, compared the horses running at his track to the superstars in ball parks, and, aware that he needed to do something to recoup his significant investment, he created a series of races that began with the Cherry Hill Mile and included, as Brennan put it, “the greatest hook of all, the Kentucky Derby.” 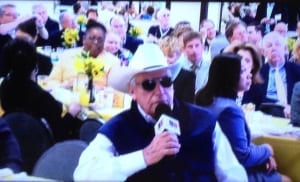 D. Wayne Lukas at the 2015 Alibi Breakfast – 30 years after winning the Preakness with Tank’s Prospect.

Brennan promised a $2 million bonus to the horse that could sweep the Cherry Hill Mile, the Garden State Stakes, the Kentucky Derby, and the Jersey Derby, scheduled for May 27, nine days after the Preakness. The winner’s share of the purses from the three Triple Crown races came to a little under $1.4 million…so when Spend a Buck improbably won the first three races in the series, the Jersey Derby all of a sudden became a whole lot more attractive than the Preakness.

Cam Gambolati, the trainer of Spend a Buck, was blunt in recalling the decision to skip the second leg of the Triple Crown.

“It was a business decision,” he said this week. “Bottom line: we decided to go for the money.”

Spend a Buck was owned by Dennis Diaz’s Hunter Farm, and Brennan started the hard sell almost as soon as the horse crossed the wire in Louisville.

“The first thing I did,” said Brennan, “was send my plane down to pick up Diaz and his entourage and get them out of Kentucky. I wanted to seduce them to come back to New Jersey for the Jersey Derby.”

With a $1 million purse, the Jersey Derby was already worth nearly three times the $350,000 Preakness. That Spend a Buck had improbably swept the series’ first three races meant that $2 million more was on the line.  That made the Jersey Derby worth, potentially, $2.6 million to Spend A Buck and his connections — nearly twice the value of all three Triple Crown races combined.

“We hit lightning in a bottle,” said Brennan.

The Kentucky Derby on May 4 had been Spend a Buck’s fourth race since March 23, and Gambolati welcomed the extra time between races that the Jersey Derby offered. And though he said that he had little to do with the final decision, nobody was shy about offering him advice.

“Wherever I went, everybody had an opinion about it,” he said. “On the street, in the grocery store, people said, ‘Here’s what you should do.’”

As the Spend a Buck camp deliberated their next steps, D. Wayne Lukas, trainer of Tank’s Prospect, who finished seventh in the Kentucky Derby, prepared for the Preakness and welcomed the news that he wouldn’t have to face the Derby winner again.

“I’m always happy to see them defect,” he said recently. “I wish they’d defect down to one.”

The reaction from the press wasn’t quite as pragmatic.

But the reports of the demise of the Preakness that year were, perhaps, greatly exaggerated. Taking on Chief’s Crown, the juvenile champion who had run third in the Derby, Lukas’s Tank’s Prospect not only won the Preakness, beating that rival by a head, but he also set a new stakes record of 1:53 2/5 for the mile and three-sixteenths. That time was, for a while, also the track record at the distance.  He earned $423,200 for the victory.

Meanwhile, Brennan was, as he recalls it, enjoying the barbs thrown his way by racing’s establishment, particularly from Pimlico and the New York Racing Association, which would host the third leg of the Triple Crown.

“They had their nose out of joint,” said Brennan. “It became quite a thing.”

And that thing became even bigger when Spend a Buck crossed the wire at Garden State Park a head in front of Creme Fraiche—who would win the Belmont 12 days later– in the single biggest payday to that point in racing history.

Brennan offered the bonus again the following year, and in 1987, the Chrysler Triple Crown Bonus was established, with $5 million going to a horse who could win the Kentucky Derby, Preakness, and Belmont, and an additional $1 million for the horse who compiled the best record in all three races.

“After mocking the concept of a bonus,” he said, “they got together and offered $5 million.”

Brennan’s moment in the racing sun was short-lived: in 2001, after years of investigation and accusations of defrauding investors, the financier was indicted on charges of bankruptcy fraud and served 10 years in federal prison. His firm, First Jersey Securities, was deemed to be a “pump and dump” operation engaged in falsely inflating the value of stocks that it also held.  As a result of his conviction, he lost all his licenses—casino, racing, liquor, CPA—and while he can apply to have them reinstated, he has so far chosen not to.

He’s not sure that his 1985 plan would find the traction today that it did then.

“You’d have to do it in multiple of what we did,” he said. “1985 dollars are worth at least five times now what they were then; the bonus would need to be $15 million.”

Gambolati’s not so sure, particularly given the changes in training practices since then.

And so, he reasons, a race that would offer a horse more than two weeks off after the Derby, with a big pot, has a chance to attract serious interest.

Lukas, the winner of the 1985 Preakness, has seen two horses equal Tank’s Prospect’s stakes record—Louis Quatorze in 1996 and Curlin in 2007—and in 2012, he saw it eclipsed…by a horse that had run a dozen years before Tank’s Prospect.

Long a matter of debate, Secretariat’s 1973 Preakness was deemed in 2012 by the Maryland Racing Commission to have been mistimed at 1:54 2/5, and was given the stakes record time of 1:53 flat. That gave Secretariat the honor of having set records in each leg of the Triple Crown.

“I always figured they’d give it to [Secretariat],” said Lukas. “There’s a big difference between Tank’s Prospect and Secretariat.”

A man who had acquired unimaginable wealth, who had socialized with presidents, the pope, and the elite of the sporting world, Brennan lives quietly now in New Jersey, consulting, writing, and working in his garden. The breeder of 1993 juvenile champion Dehere—in the name of Due Process Stable —revels in the memories of his time at the top of the racing game.

“I had restaurants, brokerage firms, golf courses, and I built all of them from scratch,” he said.

“But nothing,” he said with emphasis, “nothing compared to the exhilaration of being involved in horse racing.”