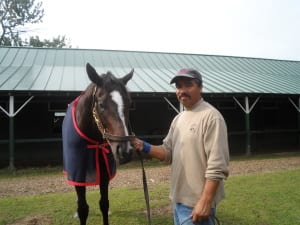 Trainer Graham Motion is looking forward to another test for his 4-year-old filly Fortune Pearl against hard-charging Todd Pletcher trainee Stopchargingmaria in the DuPont.

“She’s had enough time [to recover] since her last win at Keeneland,” Motion said. “And she was very competitive against Todd’s horse last summer.  I like to think my filly has improved since then.”

A year ago, the two horses met at Pimlico in the Black-Eyed Susan (G2), where Stopchargingmaria won and Fortune Pearl was third. But Fortune Pearl was slow to grow into form,which was not unexpected, Motion said, given her sire, Mineshaft, also developed later in his career.

“That stallion wasn’t precocious in his youth,” Motion said. “He got better as he got older and she’s gotten better as she’s matured, too. She showed very little as a 2-year-old and I ran her in a claiming race. Thank goodness no one claimed her or I’d look pretty foolish right now, with someone else having won the Delaware Oaks with her.”

Over the last year, Fortune Pearl has won three of her last five starts, including the Delaware Oaks (G2).

Seven weeks after delivering a career-best performance to win his first graded stakes, WinStar Farm’s Commissioner can make it two in a row in Friday’s $300,000 Sagamore Racing Pimlico Special (G3).

The 45th running of the 1 3/16-mile Special is one of seven stakes, four of them graded, on a spectacular 14-race Black-Eyed Susan Day program at Pimlico Race Course that also includes the Ultimate Girls Day Out, a celebration of the spirit and strength of women.

Trained by seven-time Eclipse Award-winner Todd Pletcher, who won his first Special last year with Revolutionary, Commissioner posted a Beyer Speed Figure of 109 in winning the Skip Away (G3) by a neck over Sr. Quisqueyano March 28 at Gulfstream Park.

Also run at 1 3/16 miles, the Skip Away made Commissioner the only horse of 10 in the Special field with a victory at the distance. Of the six others to have tried it only Cat Burglar, third in last year’s race, has hit the board.

“The horse looks super, he’s training well and the mile and three-sixteenths suits him well. Hopefully everything is pointing in the right direction,” Pletcher said. “We always felt the Pimlico Special was going to be our next stop. It just seemed to make sense from a timing perspective, and there wasn’t enough time to run in something in between. We like the distance for him, and we’ve been pointing for this since the Skip Away.”

Commissioner was on the Triple Crown trail last year, sandwiching a third in the Sunland Derby (G3) between sixth-place finishes in the Fountain of Youth (G2) and Arkansas Derby (G1). Pletcher skipped the Kentucky Derby (G1) and Preakness (G1) to point for the 1 ½-mile Belmont Stakes (G1), in which the 4-year-old A.P. Indy colt nearly stole the race on the front end only to be caught at the wire by Tonalist, losing by a head at odds of 28-1.

“We always felt like being a son of A.P. Indy that the Belmont was the Classic that he was best designed for,” Pletcher said. “We decided on the Peter Pan as a prep and he ran well in there. That kind of set him up for the Belmont, and we almost pulled it off.”

Following the race, Commissioner needed surgery to remove an ankle chip and did not race again until Jan. 10, finishing third by a neck in a 1 1/16-mile optional claiming allowance at Gulfstream Park. A lackluster effort in the Donn Handicap (G1) was followed by his Skip Away score.

“I think he’s fully recuperated and has come back, and like you would expect from most A.P. Indys, he seems to be getting better and better as he gets older,” Pletcher said. “Hopefully he continues to improve throughout the summer and fall.”

Commissioner will break from outside post 10, carrying Javier Castellano and top weight of 120 pounds. The two-time Eclipse Award-winning jockey was up in the Skip Away and has never been worse than third in four tries on the bay colt, including the 2014 Belmont.

“I think [the post] is OK. We’ll just try to get some position away from there,” Pletcher said. “He’s a horse that generally is pretty good away from the gate and hopefully we can get into position around the first turn without losing too much ground.”

Trainer Wesley Ward breezed a pair of horses Tuesday morning at Churchill Downs in preparation for starts on Saturday’s undercard for the Preakness Stakes.

The Ward-owned Shrinking Violet went five furlongs over the turf course in 1:05.20, while Ken and Sarah Ramsey’s Emotional Kitten covered the same distance in 1:05.40.

Shrinking Violet will return from a four-month layoff in the $100,000 The Very One for filly and mare sprinters 3 and up, while Emotional Kitten is headed to the $150,000 Gallorette (G3) for females three and over at 1 1/16 miles. Both races will be contested over the Pimlico turf.

Ward, reached at his home base of Gulfstream Park in Hallandale, Fla., said he got glowing reports on his workers in Kentucky.

The Very One will be Shrinking Violet’s first start since winning the 6 ½-furlong Monrovia (G2) Jan. 4 on the downhill turf course at Santa Anita. She emerged from the race with a shoulder issue that took time to heal, but the 5-year-old chestnut daughter of Congaree has been training well in recent weeks.

“I kind of had to do nothing with her for a while, brought her back slow and breezed her easy, but she still wasn’t quite right so I gave her another month off,” Ward said. “Now she’s just breathing fire again and feeling her oats, so we’re looking for a big effort.”

Ward felt 2013 Mrs. Revere (G2) winner Emotional Kitten was “immensely” compromised by soft turf in her last start, where she was never a threat in finishing sixth as the favorite in a one-mile allowance April 9 at Keeneland.

“She’s always kind of liked her feet rattling underneath her,” Ward said. “That race came up really, really salty. There were a lot of nice stakes horses in the race. To go on a surface that she just didn’t prefer, I probably should have come out of the race and looked for another spot, but I went ahead with it and suffered the consequences.”

Also on Saturday, City of Vengeance will run for Ward in the $100,000 Chick Lang for 3-year-old sprinters going six furlongs on the main track.

Queen’s Blade may not win the $150,000 Allaire DuPont Distaff Stakes (G3) on Friday; in fact, Pimlico-based trainer Valora Testerman would be over the moon if she did. But where the 4-year-old filly finishes really isn’t the point.

The daughter of Menifee, who finished second in the 1999 Kentucky Derby and Preakness before starting his breeding career in South Korea, Queen’s Blade is a big, strong and successful filly from the Republic of Korea. She finds herself in Baltimore as a way to help the Korean Racing Association establish a guideline for a numerical speed-figure program that will correspond to those in the United States and Europe.

It’s a tall order for Queen’s Blade, who is only here for three races and had to learn a new “language” and new operating procedure before she could even go on the race track.

“I think she did speak a different language when she first arrived,” Testerman said. The filly has since discovered a fondness for peppermints, adjusted to walking with a pony and no longer shies away from the noise of a racetrack.

“It took her awhile to adjust,” she said. “When she first got here we couldn’t even bring her out of the barn without a rider because every sound spooked her. And it’s hard just getting her a race she’s qualified for.”

The reason is based on Queen’s Blade success at home. She won seven of her 16 starts in Korea, including the Korean Derby (G1) against males and the Korean Oaks (G1), and earned nearly a million dollars. She’s also operating on time restrictions, having arrived in the midst of Maryland’s particularly cold, snowy and disruptive winter with the directive to run in three races prior to returning to Korea June 23.

None of this is new to Testerman, who has been working with Vivace Stable owner Raul Riech, who has been sending her Korean horses for several years. But the job doesn’t get easier.

“The question going into this race is: Can she run as fast as our horses do? She’s a big girl, but she breezed well on Saturday so we’ll see,” Testerman said. “I ran her in the Primonetta Stakes here at Pimlico. It was for sprinters and she’s not a sprinter, but I had to get her a race. I asked [Maryland racing secretary] Georganne [Hale] to write a race for her and she did, but no one else entered, so it didn’t go. The only races she can run in are stakes because she’s won so much and earned so much.”

As a result, Queen’s Blade finds herself in the 1 1/8-mile DuPont.

“You’d like her to be going in something easier to get her started,” Testerman said. “Stakes are hard and this is a really strong field. But I know she’s a distance runner. If she’s relaxed and runs her race, we’ll keep our fingers crossed.”