Preakness notes: Materiality out, Castellano in 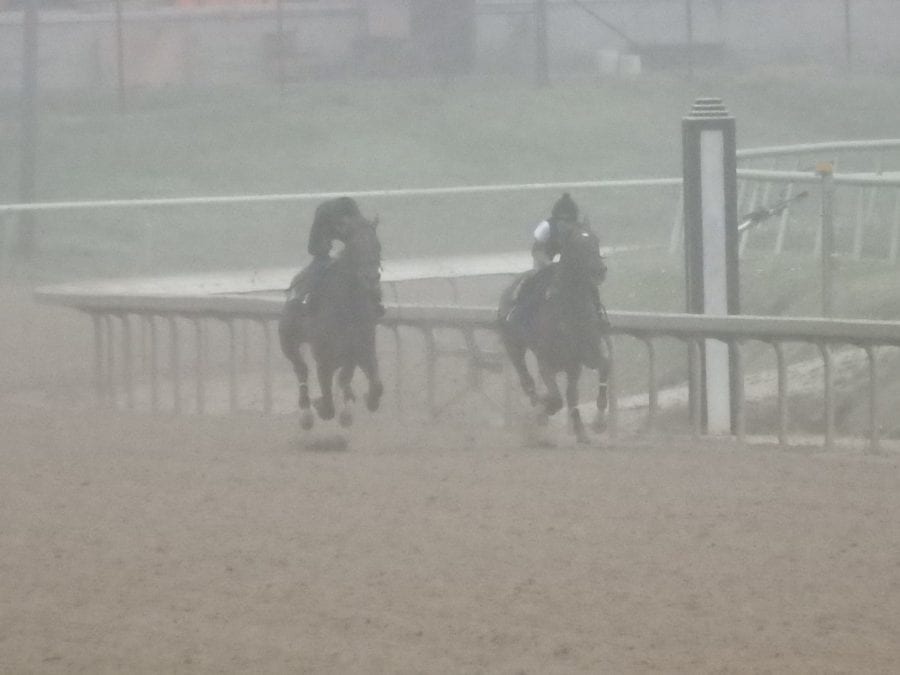 Arnold Zetcher’s Firing Line completed the Louisville leg of his preparation for Saturday’s Preakness by galloping 1 ½ miles under exercise rider Humberto Gomez after the morning break for renovation.

“He won’t train in the morning,” said Carlos Santamaria, assistant to trainer Simon Callaghan. “He will load here at 10 and Simon will be waiting for us at Pimlico.”

Firing Line had concluded his past two days of training with open gallops and Gomez said the colt was looking for more today.

“I wanted to give him an easy day today and he wants to do more,” Gomez said. “He’s got a great attitude and when he gets to the quarter-pole. He wants to go.”

Santamaria is ready for the next step on the Triple Crown trail to commence with the flight to Baltimore tomorrow.

“Everything has gone perfect,” Santamaria said. “The weather has cooled and he has done well. Knock wood, we keep it the same until we leave.”

“I was going to jog him today, but, instead, had him gallop an easy mile and a half,” trainer Dallas Stewart said of Tale of Verve, who had walked Monday following a five-eighths work of 1:00.40 on Sunday. “He’ll jog in the morning and load at the barn (for the flight to Baltimore) at 10.”

With Tale of Verve going out early for his morning activity, Stewart has had time to do a little scouting of his other Preakness competition training at Churchill Downs.

“We were considering it very seriously. Basically, it came down to we just felt two weeks was a little bit risky. We felt five weeks to the Belmont would be an advantage for him. He’s been at Belmont since two days after the Derby and has been training well. He’s by a Belmont-winning sire. If you come back in two weeks and you turn out to be wrong, not only could you not run well in the Preakness, it could compromise your chances in the Belmont as well.”

Materiality, a son of 2005 Preakness and Belmont winner Afleet Alex, had captured his first three races, including the Florida Derby, at Gulfstream Park before getting away from the gate last in the Derby and closing well to finish sixth.

Pletcher reported that Carpe Diem, 10th in the Derby, is also likely to return in the Belmont Stakes; Competitive Edge, the undefeated winner of the Pat Day Mile (G3) on the Derby undercard, would run next in either the Woody Stephens (G2) or the Met Mile (G1) on Belmont Day; and Stanford, who was scratched from the Derby, is likely to run in either the Woody Stephens or Easy Goer on Belmont Day.

Castellano, the two-time winner of the Eclipse Award, replaces Julien Leparoux, who is scheduled to ride Danzig Moon. Divining Rod will be Castellano’s fourth Preakness mount. He won with Bernardini in 2006.

Divining Rod galloped 1 ¼ miles on the Tapeta track at Fair Hills Training Center Tuesday morning then schooled in the gate. Delacour said he decided to use the synthetic surface instead of the dirt track because it had rained overnight.

Divining Rod turned in a breakthrough performance winning the Lexington Stakes (G3) at Keeneland on April 11. The homebred Tapit colt sat off the pace, accelerated when asked and moved on to a professional victory.

“I’m very interested to see how he will handle the step up in competition and the stretch out,” Delacour said. “I’m a lot more confident after the Lexington about his ability to do both.”

Earlier in his career, the colt used his speed to be on the lead and had some trouble lasting. He committed to the lead from an inside post in the Tampa Bay Derby and finished third. However, he showed a different dimension and rated kindly in the Lexington.

“I think the horse has started to understand it a little bit. This is the time of the year that a 3-year-old should start showing that experience,” Delacour said. “What I hope is going to make the difference now is that the horse can still break well and get a position – that he doesn’t have to make the lead and can sit off the pace a little bit if he needs to. That will be up to the jock and why we have that kind of rider.”

John Oxley’s Danzig Moon galloped a mile at Churchill Downs under exercise rider William Cano shortly after the track opened Tuesday morning. The son of Malibu Moon is scheduled to train again Wednesday before boarding a flight to Baltimore under the watchful eye of assistant trainer Norman Casse.

“Norman knows him better than anybody,” said father/trainer Mark Casse, who is slated to depart his home base in Canada for Baltimore on Thursday. “I stayed around to watch for a couple days after the Derby and he was good. He’s a pretty simple horse to train. He’s doing well and he’s got a lot of energy.”

The versatile colt is slated to make the fifth start of his sophomore campaign at his fifth different racetrack in the Preakness. He was fifth in the Kentucky Derby despite a traffic-marred trip at odds of 22-1, but his trainer seems relatively at ease with the quick turnaround.

“Not that the two weeks is ideal for anybody, but I don’t think it will bother him much,” Mark Casse said. “He’s tough. You just never know until they run, but we think he’s still on his game.”

Danzig Moon had only two races as a juvenile and didn’t  break his maiden until his sophomore debut at Gulfstream Park going a mile on Jan. 7. He was fourth in the Tampa Bay Derby (G2) and second to Carpe Diem in the Blue Grass (G1)at Keeneland in his final Derby prep.

“He’s a talented horse,” Casse said. “He likes to do what he does and if you’re not careful he can get a little too ambitious. The thing is, though, he will rate in a race.”

Bodhisattva Seeking to Make a Name for Himself

Neither horse nor trainer is exactly a household name, but owner/trainer Jose Corrales is hoping that changes by the end of the Preakness Stakes on Saturday.

“Most people can’t even pronounce his name, not even me,” said Corrales, whose colt’s rambling moniker is derived from a Buddhist term meaning “enlightened one.” Corrales, a former jockey, is himself a relative unknown outside of Maryland making his first start in a Triple Crown race in either capacity.

“He’s doing great,” Corrales said Tuesday morning from Laurel Park after his chestnut colt jogged and galloped over the main track. “I don’t know if he’s going to run a big race or what, but so far everything’s going good. I’m so low-key – I was as a jockey and now as a trainer. I never wanted to say my horse is better than your horse or my horse will win this because you never know what’s going to happen. So many things can happen in a race.”

Corrales does, however, admit that he had Kentucky Derby aspirations with the son of Student Council as far back as last year. Despite having only a maiden win on his resume, Corrales took the colt to New York to run in the Grade 2 Remsen, in which he finished fifth. A win three weeks later in a Laurel allowance revived his hopes.

But after running three minor stakes to start his sophomore season and only managing one second-place finish in the Private Terms, Corrales realized the Derby dream was over and he began to focus on the Preakness. When he won the Federico Tesio at Pimlico on April 18, it was full speed ahead to the Middle Jewel of the Triple Crown.

“I just wanted to let my horse know one thing that I used to say as a jockey,” said Corrales, who won more than 1,000 races after coming to the U.S. from Panama in 1976. “When I was a jockey I used to say, ‘I’m not better than nobody, but nobody’s better than me.”