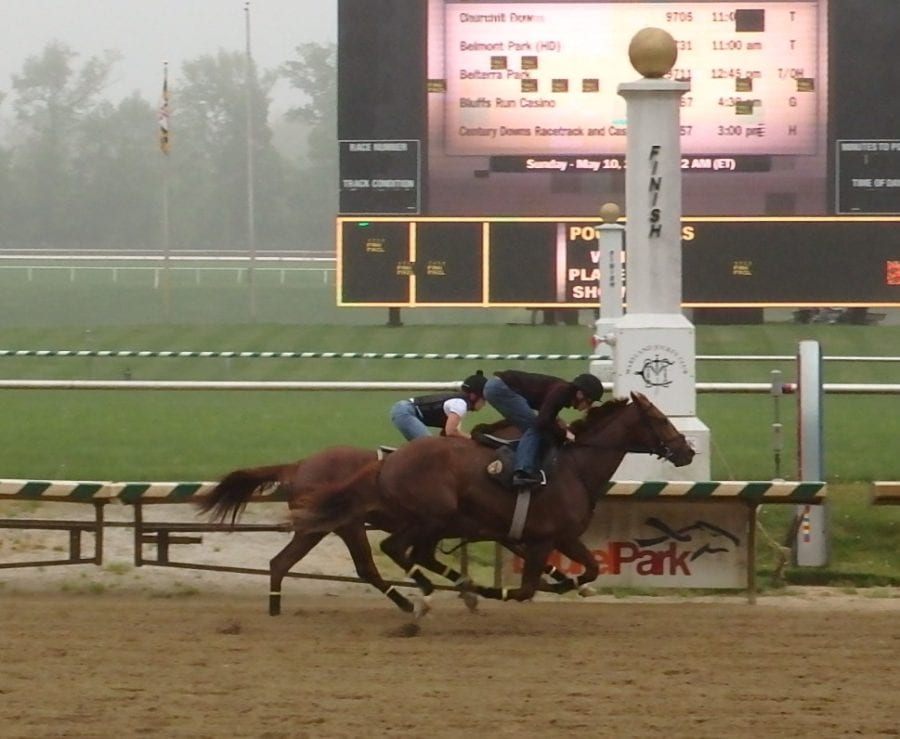 Preakness hopeful Bodhisattva (outside) completes his breeze this morning in preparation for Saturday’s Preakness. Photo by The Racing Biz.

Jose Corrales-owned and -trained Bodhisattva breezed a leisurely five furlongs in 1:04 Sunday morning at Laurel Park under jockey Trevor McCarthy while in company with a stablemate.

“I think he did pretty good,” Corrales said. “I did not want a fast work or anything like that. I just wanted to stretch him out and let him feel good about it. He really just galloped next to the other horse. Trevor said he could not hold him in the beginning, but he managed to do it.”

The Federico Tesio winner, who is a son of multiple graded stakes-winning millionaire Student Council, comes into the Preakness as one of the most experienced 3-year-olds in the field. He has made 11 career starts with three victories and eight in-the-money finishes.

This will be the first Triple Crown race appearance for Corrales, a local horseman who is the fifth-leading trainer at the current Pimlico meet with six winners from 26 starters.

“This is like a dream,” Corrales said. “It’s like a lottery ticket that we got, and we’ll see what happens. It gives you motivation because you’re running against the best horses. I’m already down at the bottom. The only thing I can do from here is improve. Some of the media has already called my horse a pony, but sometimes the ponies can beat the others.”

Bodhisattva was on the lead most of the way in the Tesio before being headed briefly and coming back on the rail to win by 1 ½ lengths at 4-1.

“The horse has improved and he’s done what I’ve needed to do with him,” Corrales said. “I’ve taken into consideration that he might not be the best horse (in the Preakness field), but his father was a good horse and he’s bred for the distance.”

And Corrales figures the Preakness is worth the gamble.

“If you don’t buy the lottery ticket, you never have a chance to win,” he said.