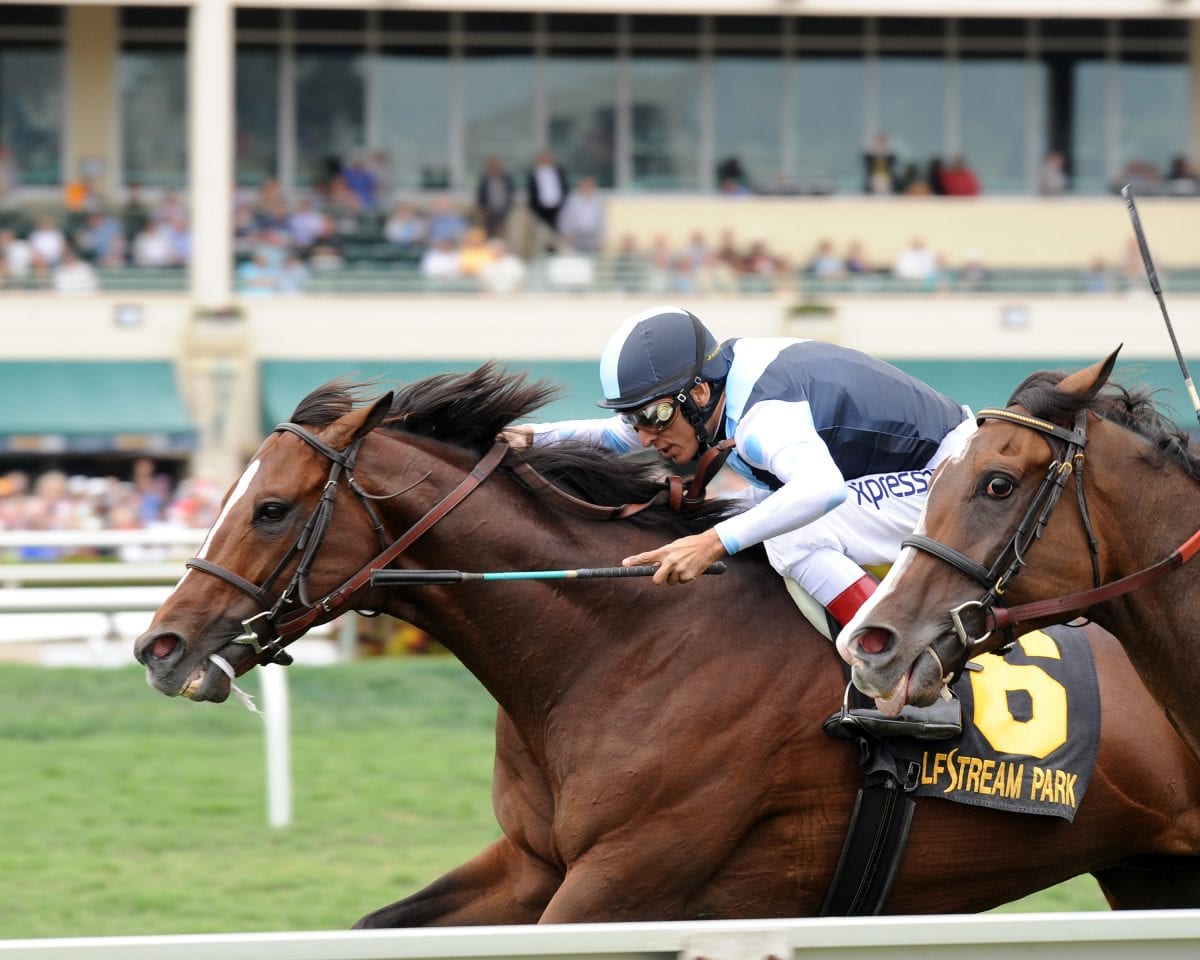 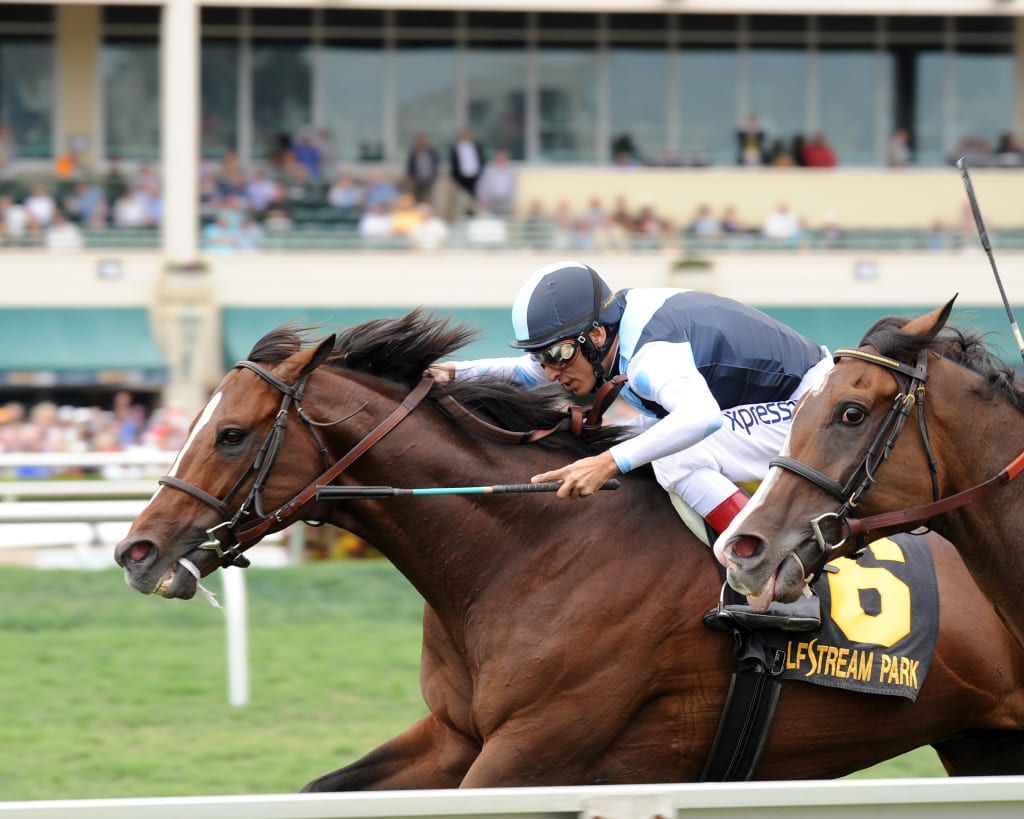 War Correspondent, here winning the Appleton, has eyes on the Grade 2 Dixie on Preakness day. Photo by Lauren King.

The 140th running of the Preakness Stakes (G1), which is scheduled to feature Kentucky Derby winner American Pharoah’s bid for a second straight triumph in his Triple Crown campaign, will be supported by seven stakes at Pimlico Race Course Saturday, May 16.

The 114th running of the Longines Dixie, a 1 1/16-mile turf stakes for 3-year-olds and up, attracted 47 nominations, including War Correspondent, Arikpeka, Legendary, Lochte, and Manchurian High.

Eclipse Thoroughbred Partners’ War Correspondent has been graded stakes-placed in his last three starts, including a close second in the Autumn (G2) at Woodbine, a third-place finish in the Gulfstream Park Turf Handicap (G1) and a victory in the Appleton (G3) at Gulfstream Park for trainer Christophe Clement.

The 29th running of the Maryland Sprint Handicap, a six-furlong sprint on the main track for 3-year-olds and up, received 38 nominations, topped by Sagamore Farm and Mel Paikoff’s Happy My Way and Fox Hill Farms’ Coupe de Grace.

The Joe Orseno-trained Happy My Way, who registered a 5 ¾-length victory in the Maryland Sprint last year, finished second in the Gulfstream Park Sprint Handicap (G3) last time out. The Larry Jones-trained Coup de Grace, who captured the Bay Shore (G3) at Belmont and the Amsterdam (G2) at Saratoga last year, finished third in his 2015 debut at Fair Grounds in his last start.

The 64th running of the Gallorette, a 1 1/16-mile turf handicap for fillies and mares, lured 37 nominations, including Speedway Stable’s Hard Not to Like, Ken and Sarah Ramsey’s Emotional Kitten and Sycamore Racing’s Nellie Cashman.

Clement-trained Hard Not to Like, who captured the Jenny Wiley (G1) at Keeneland in April 2014 before going on the shelf for eight months, captured the Endeavour (G3) at Tampa Bay Downs and checked in third in the 2015 Jenny Wiley this season. The Wesley Ward-trained Emotional Kitten, a Grade 2-stakes winner who finished second in the Goldikova (G2) at Santa Anita in her 2014 finale, made her 2015 debut at Keeneland while finishing off the board on soft turf. Francis Abbott III-trained Nellie Cashman won the Dahlia Stakes at Pimlico last time out.

Lael Stables’ Ageless and Wesley Ward’s Shrinking Violet top 32 nominations for the 16th running of $100,000 The Very One, a five-furlong turf dash for fillies and mares. Arnaud Delacour-trained Ageless, who finished fourth, beaten by less than a length, in the Breeders’ Cup Turf Sprint (G1) in her 2014 finale, came in second in the Giant’s Causeway at Keeneland in her recent 2015 debut. Shrinking Violet is scheduled to return off a four-month freshening following a victory in the Monrovia (G2) at Santa Anita in January.

The 18th running of the $100,000 Sir Barton, a 1 1/16-mile stakes for 3-year-olds, attracted 45 nominations, including Regis Racing’s Donworth, who followed up an impressive debut victory at Gulfstream with a third-place finish in the Lexington Stakes (G3) at Keeneland for trainer Graham Motion, and Conquest Stables’ Conquest Bigluck E, a third-place finisher in the Woodstock Stakes at Woodbine on April 11 after going undefeated in two starts last year.

Sagamore Farm’s All I Karabout, coming off a pair of runner-up finishes in allowance company at Gulfstream Park, and Tom O’Grady’s Bridget’s Big Luvy, the winner of the Private Terms Stakes at Laurel, lead  39 nominations for the 6th running of the $100,000 James W. Murphy Stakes, a one-mile turf race for 3-year-olds.

Pick Six Racing and Silver Streak Stables’ Ackeret, the winner of the Jimmy Winkfield Stakes at Aqueduct in March for trainer Rudy Rodriguez, and Sagamore Farm’s Commute, who finished second in a Santa Anita allowance last month for trainer Mark Casse, are among the 39 nominations for the $100,000 Chick Lang Stakes, a six-furlong spring for 3-year-olds.