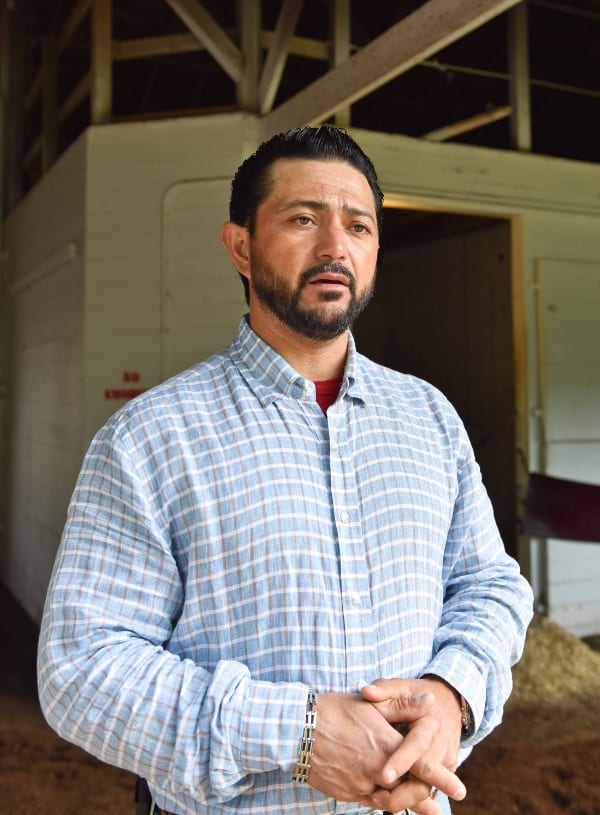 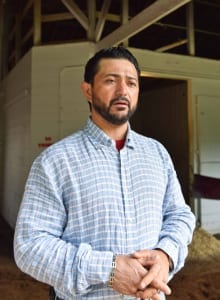 Carlos Santamaria’s new job has already exceeded his expectations. Just six weeks after signing on as trainer Simon Callaghan’s assistant, he finds himself in the midst of the 2015 Triple Crown campaign with Arnold Zetcher’s Firing Line.

Santamaria was with the colt at Churchill Downs prior to his second-place finish in the Kentucky Derby last Saturday. Now he is helping to get the Line of David colt ready for a Preakness Stakes rematch with Derby hero American Pharoah at Pimlico on Saturday, May 16 as Callaghan tends to his Southern California-based stable.

Though he has spent half his life working with race horses, the Triple Crown is new territory for Santamaria, 37, who grew up near Mexico City. He started out as a teenage groom at a training facility near San Diego, moved to the race track soon after and landed jobs at Santa Anita with the legendary trainer Charlie Whittingham and David Hofmans before working for 19 years – the last 10 as assistant trainer – with Jack Carava. Callaghan hired him in March.

“You never know when you’re going to be here, but these kind of races you always have on your mind,” Santamaria said. “I never thought I was going to be at the Derby. Two months ago, I was working for Jack Carava and his business is more about claiming horses so I didn’t even think about it. But after a week and a half in this job my life changed. I was really happy to be at the Kentucky Derby. It was a really great experience. I’m enjoying it.”

Santamaria emigrated to the U.S. when he was 16 and picked up the job at the training center because his mother’s husband was working there.

“I said I would try that job and see what happens,” he said, laughing as he told the story. “I was afraid of them because of having never been with horses, but I still loved them because they are beautiful animals. Since the first day, I knew this was going be to be my job. I definitely fell in love with horses.”

Santamaria said he was timing Carava’s horses one morning in March at Santa Anita when Callaghan, 32, asked to talk with him for a second. The British-born Callaghan, who has been training in the U.S. since 2010, proposed that Santamaria become his assistant.

“I knew who he was, but I didn’t know he was going to ask me that,” Santamaria said. “When he came out with the offer I was like, ‘Whoa.’”

Santamaria said he told Callaghan that he would think about it and he could suggest some other people to consider.

“He said, ‘No, it’s just for you. If you can’t, it’s no problem. Just let me know,’” Santamaria said. “It makes me feel great to know that he was watching me and liked the way I do my job. That’s something good for me.”

Santamaria told Callaghan, that he needed assurances that if he took the job he would have a regular day off and time to spend with his young teenage daughters, who live with their mother. He said Callaghan supported his need to have that family time, to take them to school at least once a week and be active in their lives.

“I told Simon that’s going to be one of things that’s going to help me make up my mind about this offer from you,” he said. “This way I can spend more time with my girls. I love to do that.

“For me, working with the horses, I don’t call it a job. It’s more like a way of living. If you take this job as a job you’re going to turn crazy. You know what time you have to be at the barn, but you never know when you’re going to get out of the barn. You have to love it.”

Firing Line’s runaway victory in the Sunland Park Derby on March 22, just a few days after Santamaria joined Callaghan, earned him the qualifying points he needed to get into the Derby field and stamped him as one of the better 3-year-olds in the land. He turned in a big performance in the Derby under Hall of Fame jockey Gary Stevens, finishing second by a length after having the lead in the stretch. Santamaria says he expects the colt will be just as game in Baltimore.

“I have a lot of confidence in him,” Santamaria said. “A lot of people were talking about how easy American Pharoah had been winning. This time, I think he had to run his guts out to beat us. I think we have a pretty good chance in the next race because he is competitive and he came out of the race good. His attitude is that he thinks he won the race. That will be a nice race.”

Firing Line is hardly an overnight sensation. Before his Sunland Park triumph, he gave Dortmund, the third-place finisher in the Derby, everything he could handle in two races at Santa Anita. Santamaria was confident that another gritty effort was coming in the Derby.

“Everybody who knows the horse knows he’s going to give everything he has. Everything,” Santamaria said. “The only thing you have to think of before the race is you have to wish for is he breaks good and gets a good position. After that, we knew the horse was going to do his job.

“When he was laying second to Dortmund, I knew he was going to be there. He was going to end up right there. One-eighth of a mile before the wire I thought we had the race. For one moment, I thought we’ve got it. We know the other horse is really good horse, but we knew our horse wasn’t going to give up at all.”

Though they haven’t worked together for very long, Santamaria likes the way he has been treated by Callaghan.

“I’ve been telling everybody about Simon. I always call him a kid because he’s younger than me,” Santamaria said. “Working so long for guys older than me and now working for Simon, I feel like he’s a kid. But he’s such a great guy. I always say thanks to him because since the first day working for him, he’s never told me to do this or that. He’s given me the chance to run the barn like however I think it should be done

“It’s been super great. He went back to California and he was like, ‘I know you’re going to be there.  I don’t worry.’ All the things he says make you feel good, super good. He trusts me, so I’m really happy to be working for him.”