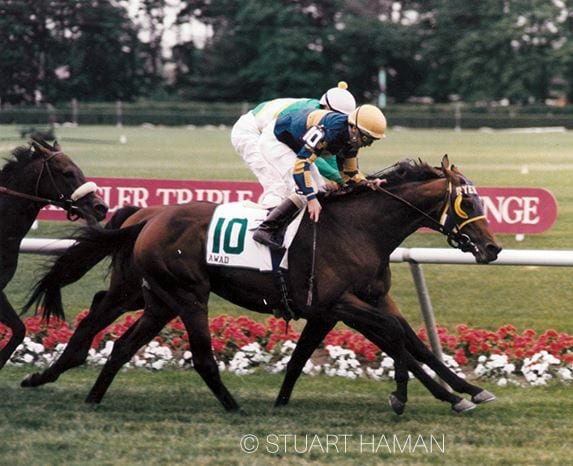 Awad won 14 races and more than $3 million in his career. Photo by Stuart Haman.

The third class of inductees into the Maryland-bred Thoroughbred Hall of Fame (MTHOF) were known for their longevity as well as their accomplishments. Awad, who remains the second-richest Maryland-bred in history with earnings of $3,270,818, made 70 starts over seven seasons and won or placed in 30 stakes, nearly half in Grade 1 competition. Little Bold John is the all-time leading Maryland-bred by number of stakes wins (25) on the flat. He raced until age 10, started 105 times and won 38. When he retired in 1992 he was the third-richest Maryland-bred in history with earnings of $1,956,405. 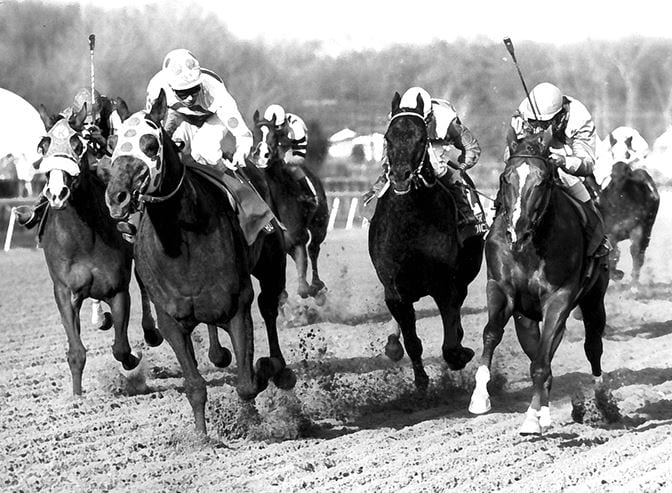 Little Bold John represented decades of breeding by Hal C.B. Clagett. The son of John Alden—Little Bold Sphinx, by Bold Ambition, was initially raced by Clagett, who sold him privately at the end of his 2-year-old season to first-time owner John E. Owens III. For five consecutive years (ages 3 to 7), Little Bold John made 11 or more starts a season, winning numerous stakes each year, topped by eight wins in 1987. Twice named Maryland-bred champion older runner (1988 and 1989), his most notable victory came in the 1987 Grade 2 Donn Handicap over a field that included the previous year’s Eclipse Award-winning Horse of the Year Lady’s Secret. He also won three consecutive runnings of the Jennings Handicaps (1987-89).

The MTHOF endeavors to celebrate the racing and stud-book achievements of Maryland-bred Thoroughbreds nationally and internationally, and to showcase their enduring legacies. The planning committee representing varied state racing interests determined MTHOF eligibility for flat runners and steeplechasers retired from racing at least five years.

A celebration to recognize this year’s class of inductees will take place at the Maryland Horse Breeders Association Awards Dinner on May 28th at Pimlico Race Course.