For “Pops” and Darius Thorpe, a racing family affair 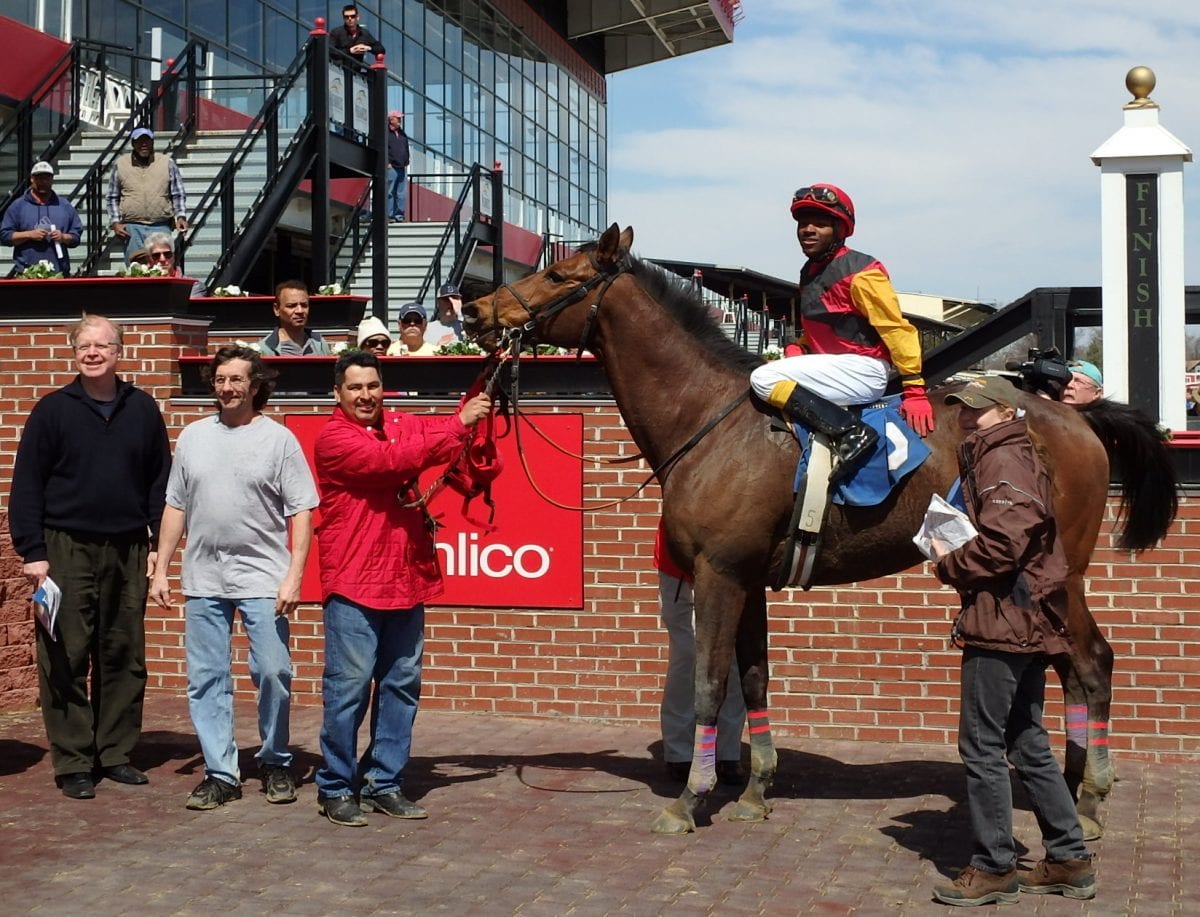 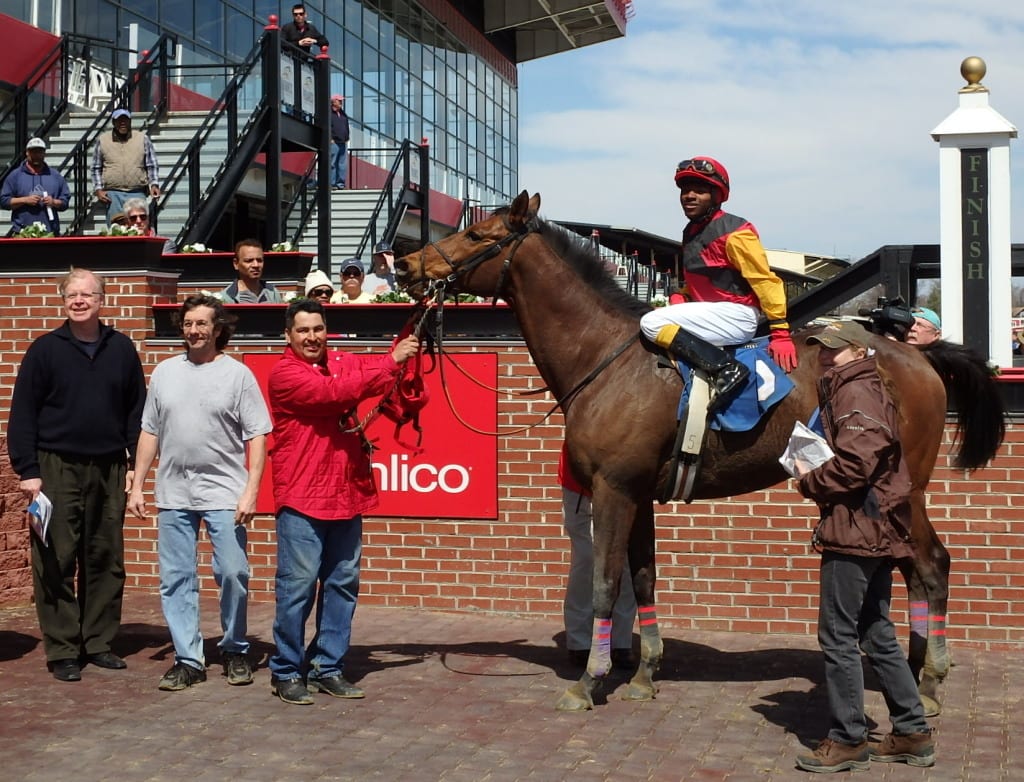 Gold Hill and Darius Thorpe won the first race of the Pimilico spring meeting. Photo by The Racing Biz.

Assistant trainer Avon Thorpe has described his 2 ½ decades of working in several roles for recently elected Hall of Fame horseman King Leatherbury as a family affair.

Never was that more true than on January 15, when Thorpe’s 19-year-old nephew, Darius, won his first professional race aboard the Leatherbury-owned and trained Rainbowappears at Laurel Park.

Being his uncle is a mere technicality. Thorpe has raised Darius from a young age since his father died. Their relationship is clearly seen and more accurately described as father and son.

“He’s been the biggest help that I could ever get,” Darius Thorpe said. “He exposed my face to people that he knew to give me a better shot and just show what I can do, having seen me grow up and seeing my improvement. It makes me feel blessed.”

Avon Thorpe was 18 when he started working for the now 82-year-old Leatherbury as a hotwalker at Pimlico. Now 42, Thorpe steadily rose through the ranks of the barn, now based at Laurel Park, to become Leatherbury’s trusted, hands-on assistant.

“I didn’t even know him. It was a case of just hiring him and him lasting and doing a good job,” Leatherbury said. “Avon kind of graduated and worked his way up into that position. He does a real good job. He’s on top of everything and very knowledgeable. He keeps people straight.”

Thorpe said he’s never considered going out on his own, and is content to work with the Mid-Atlantic legend who ranks fourth all-time in wins and was announced April 20 as a member of the National Museum of Racing and Hall of Fame’s Class of 2015 – his first year on the ballot.

“If it ain’t broke, don’t fix it. King gave me an opportunity to learn a lot and he lets you pretty much use your own judgment on a lot of things where a lot of other trainers probably won’t do that. He treats me like a son,” Thorpe said. “I stayed because I saw an opportunity. It was my time, and I never looked back. I don’t plan on leaving.”

Thorpe is now passing that knowledge down to Darius, who has been an eager student from the time he was young.

“At 8 years old he said, ‘I want to be a jockey.’ He kept saying it and I told him, ‘Boy, you’re going to get too big,’” Thorpe said. “At 8 years old he was in the tack room, just riding a saddle on the sawhorse the saddle sits on. When he got in high school, I got him an Equicizer so he could practice. All day and all night he was on that horse. I had to tell him to go to bed.

“He paid attention a lot. He looked at every race everywhere. He watched the good riders. He stuck with it, and it means so much,” he said. “That’s what he loves. That’s what he wanted to be, and I’m going to stand behind him 100 percent. He’s still going to college to have something to fall back on if he gets too heavy or whatever. I just like to let him live his life. I’m doing what I want to do and what I love, and I want him to do the same.”

Darius Thorpe juggles studying architecture at Ann Arundel Community College with riding. He has two wins, three seconds and four thirds at Pimlico’s spring meet which opened April 2 after going 61-2-6-8 during the winter session at Laurel Park that ran Jan. 1 to March 29.

“Pretty much since I’ve been little I’ve been around the track. I always found a comfort zone being around horses, so I knew I wanted to do this for a long time,” he said. “It’s been better than I expected. It’s picking up.”

An apprentice currently riding with a 10-pound weight allowance, Thorpe’s first win came as an amateur last year before launching his professional career in the fall at Laurel Park. Getting his first pro win for his father and Team Leatherbury made it extra special. 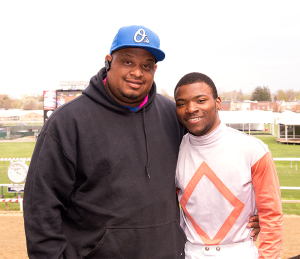 “It made me feel blessed to know that I had the chance to win for a Hall of Famer who gave me a shot on a good horse. Everything just played out right,” he said. “I just want to stay humble, always listen and follow directions and be the best rider I can be for as long as I do this.”

Thorpe won the first race of the current Preakness Meet at Pimlico by a nose aboard Gold Hill ($29), and rode $28.20 winner Sizzling Lassie on the Federico Tesio undercard April 18 for owner-trainer Robert Gamber.

“I heard a good report on him when he won that race. Eric Camacho, who’s a friend of mine and a good rider, said he switched sticks good and looked good on a horse,” Leatherbury said. “That’s what he’s got to do, just get more experience. The more you do something, if you’re good enough, you’re going to benefit from it.”