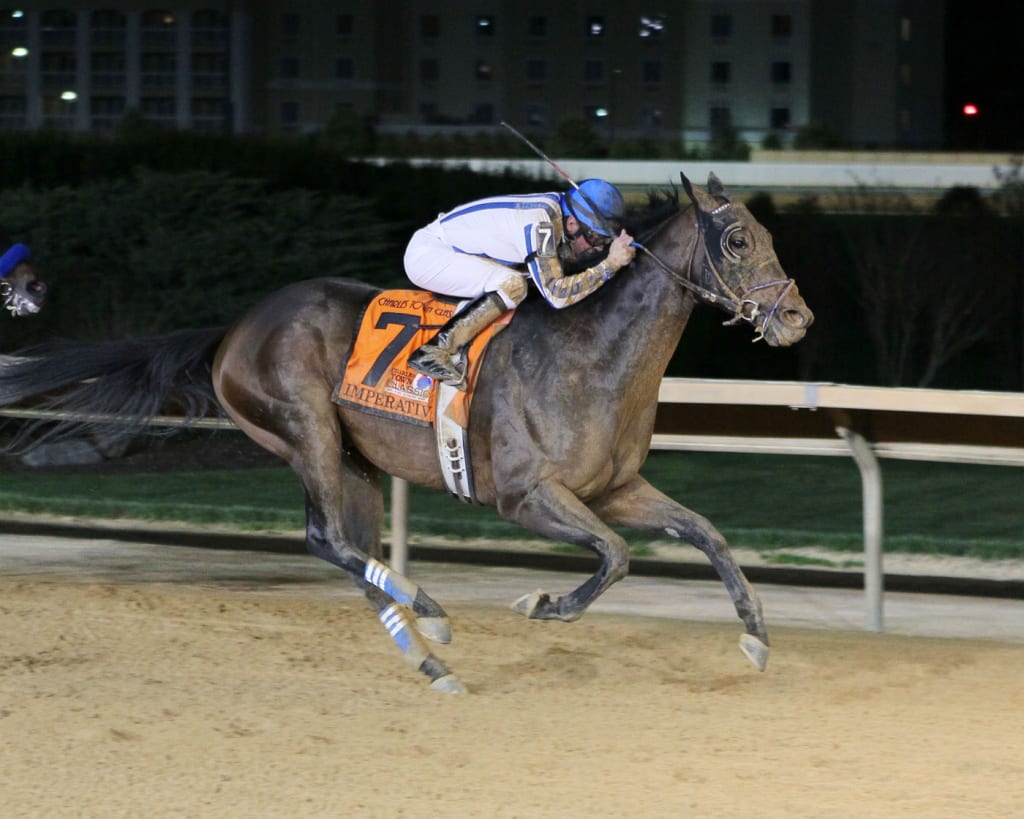 In his first appearance of 2015, Shared Belief ran as if laying down a declaration of intent – to stamp himself as the best racehorse in the world.

In the Grade 2 San Antonio Invitational Stakes on February 7 at Santa Anita, Shared Belief pulled alongside California Chrome at the eighth pole and then danced away from the reigning Horse of the Year to post an emphatic 1 1/2 length win.

The stunning victory was just a prelude to 4 1/4-length destruction of the field in his next start, the prestigious Grade 1 Santa Anita Handicap.

Now, having run his lifetime record to 10 wins in 11 starts, Shared Belief will seek to capture the biggest purse of his career when he faces eight other runners Saturday in the seventh running of the $1.5 Million Charles Town Classic (G2) at Hollywood Casino at Charles Town Races.

For a handicapping-centric view of the $100,000 guaranteed Pick 4, which concludes with the Classic, check out our In Focus: Playing the $100,000 Pick Four.

Trained and ridden by Hall of Famers Jerry Hollendorfer and Mike Smith, respectively, the only question Shared Belief will have to answer in the Classic is if can he handle running around three turns on Charles Town’s six-furlong course.

“It’s an unknown,” Hollendorfer said earlier this week after Shared Belief worked a half-mile in :51 4/5 seconds at Golden Gate, his hometown track. “But we have a very athletic horse that has a big turn of foot. We think he should be able to handle that and get the job done, or we wouldn’t come. I talked to Mike Smith, and he was quite confident the horse would do well there. [Smith] has done well there, himself, so I tend to think he knows what he’s talking about.”

Hollendorfer said choosing to run Shared Belief, champion two-year-old of 2013, in the Charles Town Classic was not a difficult decision.

“The main consideration was it’s a lot bigger purse than anybody else is offering,” Hollendorfer said. “Number two, the weight [Shared Belief will carry] is 123, and that was quite attractive to us. Number three, timing wise, it gave me an extra week to work with the horse and get him ready for another race. Our horse is doing very well, and we’re grateful.”

While Shared Belief will go off as a prohibitive favorite, the Classic field is a good one.

One of Shared Belief’s most dangerous rivals figures to be the mercurial and fleet Moreno, a five-year-old son of Ghostzapper, who has earned more than $2 million in his career while only winning three races in 25 starts. One of those races – the Grade 1 Whitney – however, ranks among the most prized in the country.  He also took down the Grade 2 Dwyer in 2013 at Belmont Park.

Trained by Eric Guillot, Moreno loves to run on the lead, and he finished second to Shared Belief after making the pace in the Santa Anita Handicap in his first start off the bench this year. Moreno finished third last year in the Charles Town Classic.

Guillot has not always been happy with the rides he has received on Moreno, preferring jockeys to send his horse straight to the front. In his most recent start, Moreno stalked the pace in the New Orleans Handicap, opened up in the stretch but was beaten at the wire by a half-length.

“If you want to be a Moreno fan, you have to listen to me,” Guillot said. “He’s a one-trick pony. If you’re in front of me, you went too fast.” 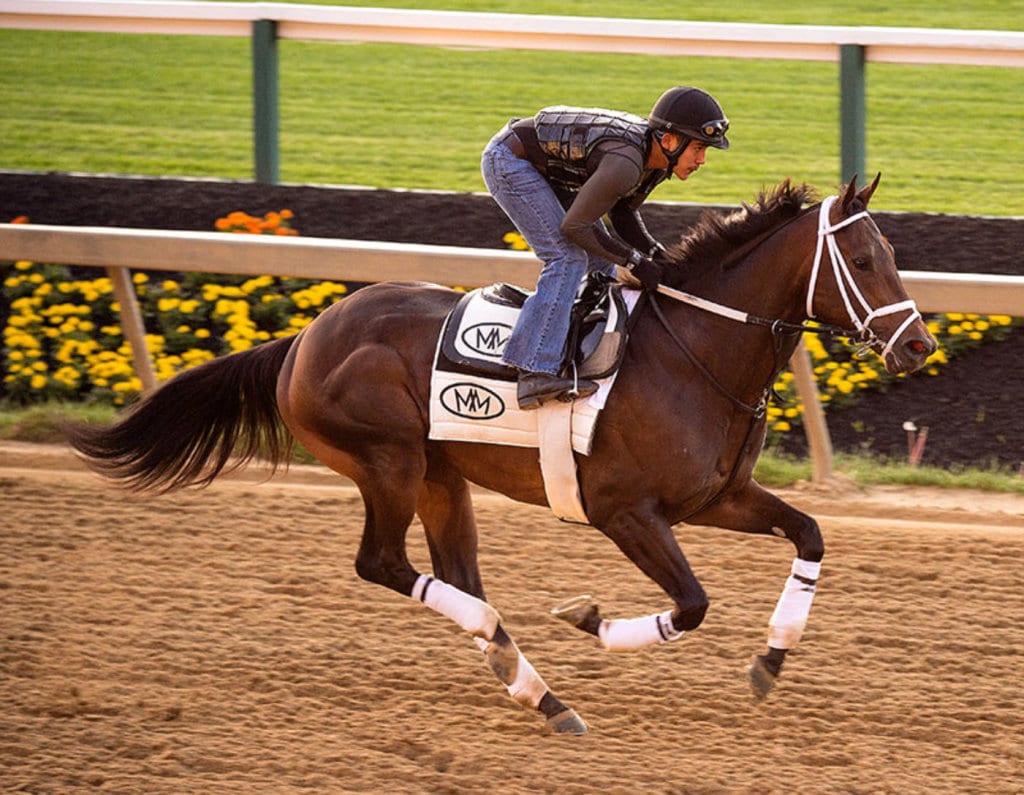 2014 Eclipse Award-winning trainer Todd Pletcher will send out General a Rod, who competed in all three Triple Crown races last year, with his best finish being a fourth behind California Chrome in the Preakness Stakes.

General a Rod, a son of Roman Ruler, was one of the hottest and fastest 3-year-olds of last winter, winning the Gulfstream Park Derby before finishing second in the Fountain of Youth (G2) and third in the Florida Derby (G1). After a long rest following the Triple Crown series, he returned to the races with a tune-up sprint and then effortlessly won the Challenger Stakes on March 7 at Tampa Bay Downs.

Pletcher also had considered Race Day, recent winner of the Oaklawn Handicap (G2), for the Classic, but ultimately decided General a Rod was a better fit for the race.

“He had a history training at the Churchill Downs [Trackside] training center, which is six furlongs as well, and he seemed to like the circumference at the track. He was there when he was with Mike Maker.

“We’ve had this race under consideration for well over three seeks, so it wasn’t a late development. He showed last year, on occasions, he’s very good. He got time off in the fall and his last race was a step in the right direction. We’re optimistic. It’s his third start off the layoff, and, hopefully, he’s sitting on a peak performance.”

General a Rod will have John Velazquez in the saddle for the second consecutive start.

Another veteran of the Triple Crown battles, Vyjack, will race for trainer Rudy Rodriguez in his second start of the year.

Vyjack, a 5-year-old gelded son of Into Mischief, won the Grade 2 Jerome and Grade 3 Gotham in his three-year-old year before finishing up the track in the Kentucky Derby. He began to return to form last fall, finishing third in the Grade 1 Forego at Saratoga and then winning the Grade 2 Kelso at Belmont Park.

This year, he prepped for the Classic with a fifth-place finish in the Stymie on March 22 at Aqueduct.

“We’re shooting for the top,” Rodriguez said. “Hopefully, the horse will show up. He’s coming in very good shape. We didn’t have him ready for the last race, but we wanted to run. His better races have been at one turn, but it’s $1.5 million, and we want to see if he likes the track. I guess everyone is doing the same thing – trying to beat Shared Belief.”

Locally based Jose Montano, winner of the 2012 Eclipse Award as the country’s top apprentice rider, has the call on Vyjack.

The proven giant killer in the field is its defending champion, Imperative, who stunned Game on Dude last year at odds of 26-to-1 to take the Charles Town Classic by 1 1/2 lengths.

The five-year-old gelded son of Bernardini is winless since, but he wasn’t winning heading into the race last year, either. In his most recent six starts, Imperative has been beaten by Shared Belief four times, by Bayern in the Breeders’ Cup Classic and also attempted a quixotic journey to run overseas in the Japan Cup, where he finished 15th.

“He got into trouble over there, bad trip and all that,” said trainer George Papaprodromou. “The plan was always to come out here to Charles Town and win this race. We always jump from one race to another, but the plan was to come here. Shared Belief is a great horse. He’s a freak. But Game on Dude was a freak and unbeatable. He can run. He can do it.”

The remaining four horses in the Classic are wild cards.

Street Babe has made just three career starts, but he annexed the Grade 3 Mineshaft in his most recent start against a good field February 21 at the Fair Grounds. The 4-year-old gelding is a son of Kentucky Derby winner Street Sense and has strongly impressed his trainer, Michael Dilger.

“He’s training very well, and he’s a very good horse; it’s as simple as that,” Dilger said when asked how such a lightly raced horse could compete in the Charles Town Classic. “His work at Palm Meadows [April 10, five furlongs in 1:01.75, best of 10 at the distance] this week was very good, as good as any horse I’ve seen in the eight or 10 years I’ve been at Palm Meadows.

“We have high expectations for the horse, and going to Charles Town is a little bit of an experiment. It’s a six-furlong track, and he’s a big horse, but we’ve been drawn by the prize money. Win, lose or draw Saturday, we expect to go on and have a good year.”

If there is a rags-to-riches victory in the race, it will come from Page McKenney. The five-year-old gelding was claimed two years ago for $16,000 following a sixth-place effort at Penn National, and he has gone on to win four stakes races and 10 of 19 starts, with six second-place finishes, for trainer Mary Eppler.

A proven runner on turf or dirt, Page McKenney steps in against top company for the first time after back-to-back stakes scores in February and March at Laurel Park.

“I knew he was a better horse than I had claimed,” Eppler said. “I was like, ‘We can make some money with this horse.’ The good thing about him was he had so many conditions [available to run in] because all he had won was his maiden. So, I ran him in the starters.”

Page McKenney won the John B. Campbell Handicap in his first start this year and then missed eight days of training because of bad weather and still won the Harrison Johnson Memorial.

“He’d only had one work after the Campbell, and we couldn’t even [walk him on the] shed row because the shed row had flooded and then frozen,” Eppler said. “The dorms up above us, the pipes broke. He hasn’t missed a beat now since the Johnson.”

Ron Paolucci, owner of entrant Looking Cool, is no stranger to taking chances in big races. He sent out the unlikely Ria Antonia to a 32-to-1 score (via disqualification) two years ago in the Breeders’ Cup Juvenile Fillies and in the following year ran her in the Preakness Stakes.

He claimed the 5-year-old Looking Cool for $62,500 last month with the sole purpose of running in the Charles Town Classic.

“I realize he’s an outsider, but you have to be in it to win it,” Paolucci said. “If Shared Belief brings his ‘A’ game, everyone is running for second, but we claimed him specifically for this race. I didn’t know Shared Belief was going to run when I claimed him, but I bought Ria Antonia for the Breeders’ Cup and everybody thought I was crazy.”

Maryland-based long shot Warrioroftheroses, who is 1-for-2 on the Charles Town course, completes the field.