Noteworthy Peach looks to step it up in Tesio 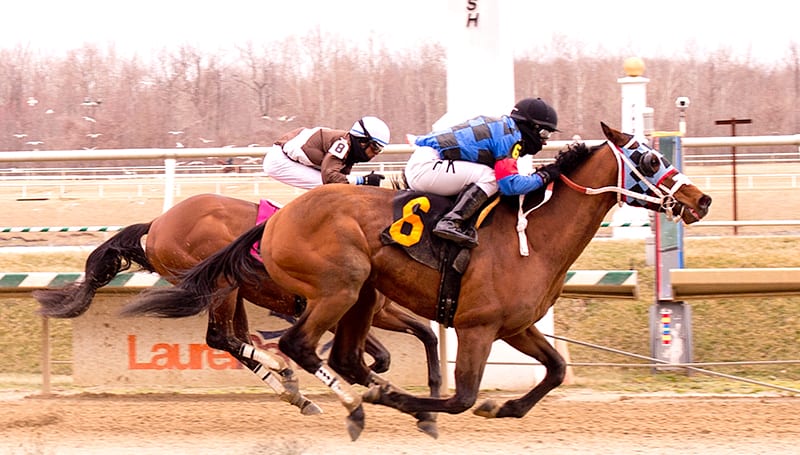 Non Stop Stable’s Noteworthy Peach, a winner in two of three starts this year, will try stakes company for the first time in Saturday’s $100,000 Federico Tesio at Pimlico Race Course.

In 2003, trainer Gary Capuano sent Cherokee’s Boy to the Preakness off a victory in the Tesio. Cherokee’s Boy was already a four-time stakes winner by the time he ran in the Tesio while fellow Maryland-bred Noteworthy Peach has made a total of five starts for Capuano, all at Laurel Park.

“We’re going to give it our best shot and if everything goes good, we’ll see how he does,” Capuano said. “It’s exciting. It’s good to have a horse that might be competitive in those kinds of races. I’m looking forward to later in the year because he may just get better and better. He acts like the farther he goes the better he’s going to get. He’s still got to prove it.”

Noteworthy Peach ran for a tag in each of his first three starts, going winless at 2 before breaking through in a one-mile maiden event Jan. 9 to open his sophomore campaign. Second in his first try against winners Feb. 7, he rallied from a troubled trip to take an optional claiming allowance by a half-length March 28.

“He really stepped up last time. He ran a huge, huge race,” Capuano said. “Sometimes, those 2-year-olds when they turn 3 they’ll make those big jumps. Hopefully he’ll be able to repeat that. My only question would be whether his best races are a one-turn mile. He definitely ran well going two turns at Laurel, but not like he did last time. He had kind of a rough trip and when he got outside he really kicked in and finished up that last quarter brilliantly. Hopefully he can go back to that race or at least close to it, anyway, and have a competitive chance.”

Noteworthy Peach went off at 39-1 in his most recent start, outfinishing favored Top of Mind to win by a half-length. Top of Mind and Ghost Bay, a distant fifth in that race, both return in the Tesio.

“The race he was in last time looked like a really tough race on paper. There were some pretty nice horses in there,” Capuano said. “It didn’t look to me like he should have been [almost] 40-1 but being that there were a couple of horses that really looked outstanding, they took the action and made everybody else’s odds a little bit different. Did I expect a race like that? No. Obviously, on paper he had to improve which he did. He improved dramatically. Everything’s moving forward and looking good. I’m pretty optimistic and looking forward to see if he can repeat that.”

Howard Bender’s Maryland homebred Ghost Bay was third in his first two starts last year, not beaten by more than 3 ½ lengths, before coming from dead last to capture the Maryland Juvenile Futurity Dec. 27 at Laurel. He will carry topweight of 118 pounds in the Tesio, two more than each of his six rivals.

Given three months off, the Ghostzapper colt returned to run fifth by 12 lengths in his 3-year-old debut, racing unusually close to the pace before fading down the stretch and leaving trainer Lawrence Murray wondering what kind of race is in store in the Tesio.

“I was very disappointed in his last race. It was very uncharacteristic for him. He was in front early, which is not the way he ran his three prior races. I was expecting him to always be a come-from-behind horse,” Murray said. “I don’t know what to expect in the Tesio. Certainly, the outcome of the last race wasn’t what I was looking for. He always breaks well and then takes himself back and makes a run. That day he was just very sharp for some reason. I don’t know if it was the fact he hadn’t run in 90 days or what, but it was kind of a surprise to see him run like that. I’m hoping he goes back to relaxing and making one run.”

Like Noteworthy Peach, Hillwood Stable’s Top of Mind is making his stakes debut in the Tesio. Unraced at 2, the son of two-time Horse of the Year Curlin has run twice this year. He rolled by 3 ¾ lengths in a six-furlong maiden special weight Feb. 13 prior to the March 28 race at Laurel.

“He ran a nice race the other day,” trainer Rodney Jenkins said. “He got beat when that horse closed down on him really quick. It was a good race, and I think he should move up off of that effort.”

Veteran trainer Hamilton Smith entered another Maryland-bred gelding, Laurel maiden winner Slick William, for the Tesio, who is cross-entered in a 1 1/16-mile Pimlico allowance on Friday. Most recently, the son of Mid-Atlantic stallion Great Notion was fourth in the Private Terms March 21.

“He came out of his last race fine. I just ran a short horse there,” Smith, 70, said. “He got a little tired the last part of it. I thought he should have been closer had he been fit enough. I don’t know if he’d have won it but I think he could have been a few lengths closer, anyway. He should improve off that race. He’s still learning, this colt. It takes him a little longer to get things together than some of the other horses I’ve got. I think the best of him is yet to come. He’s learning and maturing all the time.”

Private Terms runner-up Bodhisattva; All Hands, a recent maiden winner at Aqueduct for trainer Kiaran McLaughlin; and Laurel maiden winner Jack O Liam, cross-entered in the same Friday allowance as Slick William, round out the field.