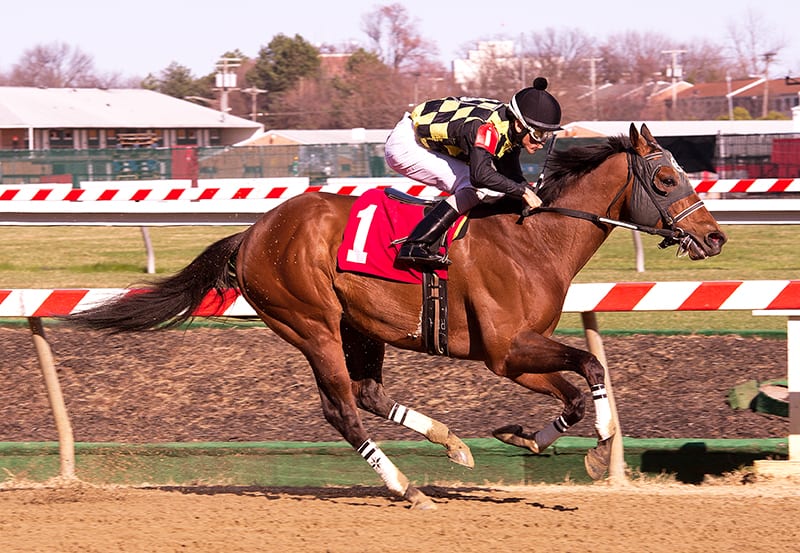 A short opening weekend of racing at Pimlico concluded Saturday, with no racing on Sunday in observance of Easter.

Saturday’s feature went to River Rush, who took command of the third-level allowance early and motored off to an eight-length win under rider Roimes Chirinos.  The six-year-old son of Orientate has five career wins — but three wins and two seconds in his last six starts, the lone off-the-board finish coming in the Native Dancer Stakes.

“We loved the horse going into the race,” said trainer Kieron Magee. “Last time, he drew the outside hole and got carried wide. In the one hole, he saved the ground.  We made the decision this morning to put him on the lead and see what happened…”

Saturday was also a day to celebrate jockeys, and a Jockey Rody Pony Race was held on the turf course after the fourth race with fans making minimum $5 donation bets on the winner. Those who placed their donations on apprentice Harry Hernandez received signed caps from the Permanently Disabled Jockeys Fund. Rody Ponies are basically large, bouncy balls shaped (more or less) like horses.

Aboard Rody Alexandra, Hernandez bounced his way aboard the inflated facsimile of a horse to a front-running victory over several more experienced riders.   “It went wonderful. My horse was 50-1. I thought I had no shot, but my horse, I think ran good,” said Hernandez, getting in the spirit of the exhibition. “I thought Trevor and Sheldon had the best horses, but we did it.”

Trevor McCarthy won twice on Saturday to cap off a five-win week at Old Hilltop, giving him the (very) early lead in the jocks’ standings.  He has one more win than both Chirinos and Sheldon Russell…

Wayne Potts is the only trainer with more than one win through the first weekend of live racing; he has two, from five starters…

Nonna’s Boy, trained by Todd Pletcher, made his first start since last August’s G2 Saratoga Special a winning one when he dusted a first-level allowance field on Friday at Old Hilltop.  Under Trevor McCarthy, he stalked the pace of ultra-longshot Hertzalot before drawing off to a two-length score.

“It’s a big deal to ride for Todd,” said McCarthy. “He does a great job and he’s the leading trainer in the country every year.  It’s a big privilege and I really appreciate it…”

The meet opened with a bang on Thursday when 13-1 Gold Hill upset the first race, a $5,000 claimer for horses that had never won two.

How unlikely was the outcome?

All in all, that’s an unfriendly set of numbers.  But Gold Hill rallied late to nail 7-5 Handsome Senor by a nose on the wire…

There will be a $7,195 carryover into Thursday in the Rainbow Pick 6, a jackpot wager.  There will also be — weather, of course, permitting — the first turf racing of the year, with four of the day’s eight races slated for the lawn.