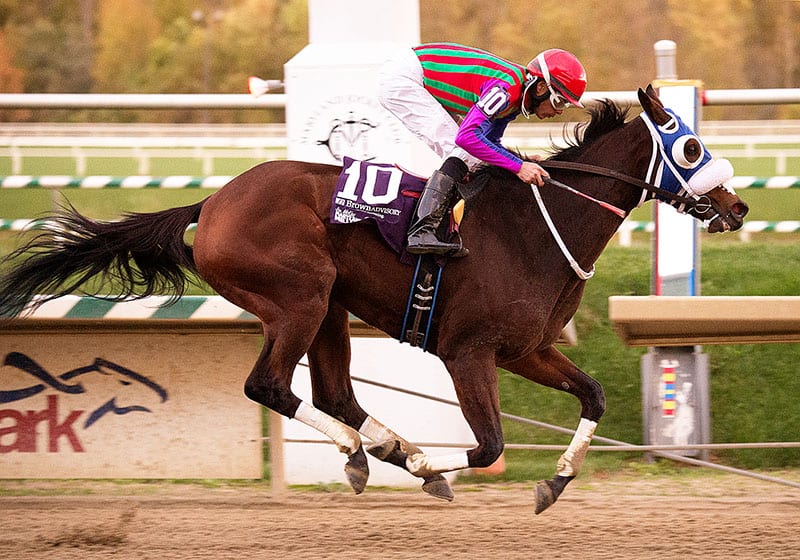 Printasticat is aiming for her fourth straight win in Saturday’s Conniver, for Maryland-breds. Photo by Jim McCue, Maryland Jockey Club.

Somraj Singh and MCA Racing Stable’s Printasticat will look to run her win streak to four in Saturday’s $100,000 Conniver Stakes, a 7-furlong contest for Maryland-bred fillies and mares, at Laurel Park.

The 6-year-old mare has captured her last three races locally by a combined 21 ¼ lengths for trainer Claudio Gonzalez, continuing a good run that began with a win in the Maryland Million Distaff Starter Handicap last October.

A daughter of Fantasticat and the Jimmy Barnie (GB) mare After Eight Review, Printasticat’s last three wins have come at distances spanning from 6 furlongs to a mile, both while showing speed and while rating just off the pace. Most recently, the veteran of 43 starts flashed her tactical speed on the front end, coasting home to a 7 ½ length victory in a starter allowance on Feb. 14.

“She’s doing very good,” Gonzalez said. “She came back [from her last race] very good, and she’s training excellent. She’s 100 percent, and I believe that she’s going to be tough in the race. The other day she breezed really easy with [Victor] Carrasco (5 furlongs in 1:02 on March 10). He’s going to ride, and he came back very happy with her and how she felt.”

Toby Roth’s Eddy Gourmet will make her stakes debut in the Conniver. The 5-year-old daughter of Eddington most recently won a 7-furlong allowance when she rallied to get up for a half-length victory at Laurel on Feb. 8. Trainer Hugh McMahon added blinkers for the start, which proved to be a good decision.

“She came out of her last race good,” McMahon said. “We were wondering about how she would handle 7 furlongs. She’s normally on the front-end setting hot fractions, but we put the blinkers on, and she actually relaxed. We were going to run her in a mile race, but the stakes coordinator told me about this race, and she won at 7 furlongs, so why not? Training wise, she’s on top of her game right now.”

Also included in the Conniver field are: Turf Craze, Celtic Katie, If Not For Her, My T Swift, Jonesin for Jerry, and Coco Punch.