King Leatherbury: Honored, but not optimistic 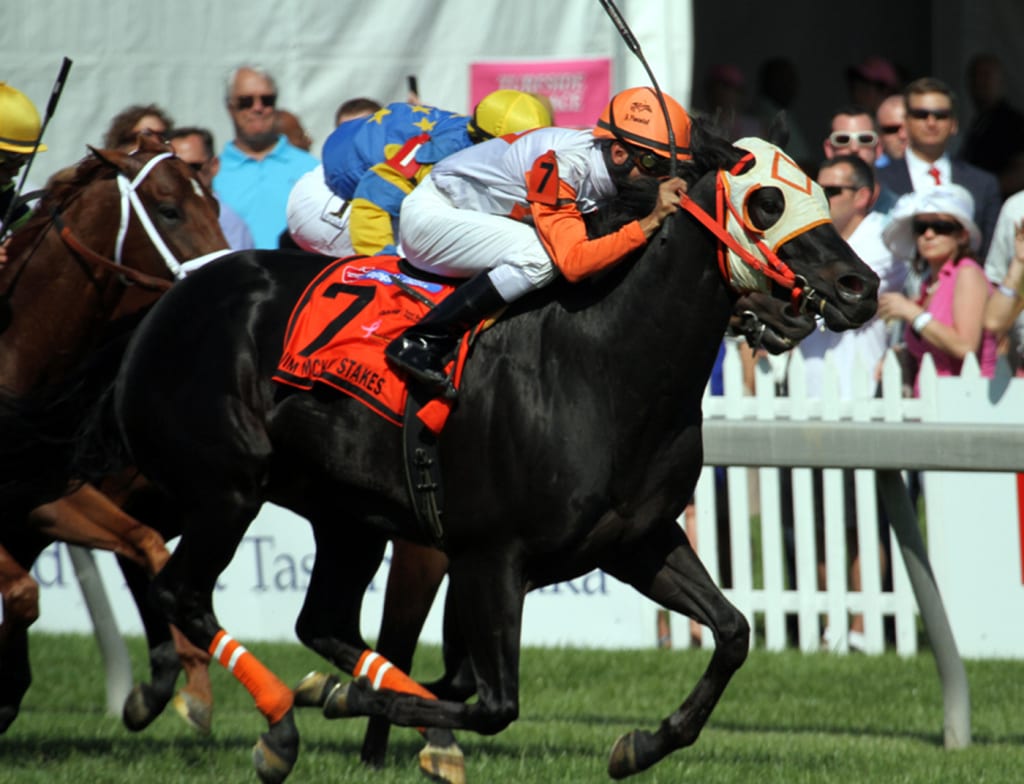 If anyone in horse racing could claim to have done it my way, it’s King Leatherbury. Among the items you won’t find on his training resume are a Kentucky Derby winner or a Breeders’ Cup horse. What you will find are 6,449 total wins, which, by the way, is good enough for the fourth most on the all-time trainers’ list. 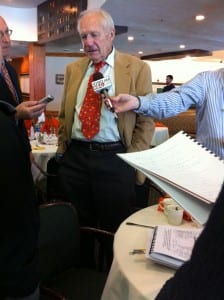 The King holds court. Photo by The Racing Biz.

Will he get in?

Upon being asked whether he thought he’d take the next step and be inducted in his first year on the final ballot, Leatherbury, without hesitation, said, “No, no. Not really.”

The response was both amusing and deflating. It was classic Leatherbury. He spoke in his usual ‘I’ve been around this game long enough to know how things work’ tone. He went on to add:

“Whatever happens, you know. I’m not getting optimistic but I appreciate the honor.”

In addition to feeling honored, Leatherbury said he was surprised to actually make the ballot. He didn’t lobby for it and hadn’t given any recent thought to becoming a Hall of Famer. But other people had given it a lot of thought and advocated on Leatherbury’s behalf.

“There’s been an extensive kind of push for him through social media and a lot of people in the Mid-Atlantic region” said Brien Bouyea, Director of Communications at the National Museum of Racing and Hall of Fame.

Bouyea said that anyone, including fans, can nominate a person or horse. All nominations are forwarded to an official committee, consisting of veteran journalists and members of the Throughbred industry. That committee then pools the candidates, votes on finalists and, ultimately, names the 10 highest vote-getters to the ballot.

Within the next  week to 10 days, a 183-member voting panel will receive their ballots, and a final round of voting will commence. It all culminates with an announcement on April 20 of the four highest vote getters, who will be inducted into the Hall of Fame this August.

“It certainly is an honor,” Leatherbury reiterated. “I appreciate that and we’ll see what happens in the voting.”

Aside from Leatherbury, David Whiteley is the only other trainer on the ballot. Whiteley won 678 races, including the 1979 Belmont Stakes-G1 with Coastal.

Among the other finalists is Xtra Heat. The Maryland-based daughter of Dixieland Heat, trained by John Salzman, Sr. for himself in partnership with Kenny Taylor and Harry Deitchman, earned $2,389,635 while winning a record 25 stakes, including multiple graded events, among them the Grade 1 Prioress in 2001 and the 2002 and 2003 Grade 2 Barbara Fritchie Handicap.  She also ran second in the ’01 Breeders’ Cup Sprint and third in that year’s Grade 1 De Francis Dash, both against the boys.

Additional support for Leatherbury has come from fellow Mid-Atlantic-based trainers, who have watched Leatherbury for at least part of his career. He has won 52 training titles in Maryland (26 each at Pimlico and Laurel) and four at Delaware Park, while racking up nearly $63 million in career purse earnings.

“He’s been doing it and getting it done, year after year, for a very long time,” said Mike Trombetta, who has strings at both Laurel Park and Fair Hill Training Center. “When I was just starting out, he was rolling as good as ever in those days… and the job he’s been doing with Ben’s Cat in the last couple of years just put a heck of an exclamation point on a very good career.”

Ben’s Cat, now nine, has won 28 races and more than $2.3 million for Leatherbury, who bred, owns, and trains him.

Trainer Rodney Jenkins, based at Laurel Park, also voiced approval for the nomination.

“What more can he do?” Jenkins asked rhetorically. “I think it’s very deserved and a long time coming.”

Leatherbury’s wait has been, in part, the byproduct of a resume that was built locally. For many years, he was a very big fish in the regional pond and rarely shipped horses out of the Mid-Atlantic. Trainer Larry Murray said geography hasn’t played to Leatherbury’s advantage.

“Unless you’re in New York or California, or you’re on the Derby trail every year, you don’t get that kind of recognition here in Maryland,” Murray pointed out.  “You know, he just grinds out races.”

Leatherbury did grind, as only he could. By all appearances, he never used anyone else’s playbook. He’s put people good at their jobs in place — like current assistant Avon Thorpe — and let them do those jobs.  Other trainers have always marveled at that.

“He’s unconventional,” Murray added. “He doesn’t come and watch his horses train like all of us do, but he gets it done. He’ll even tell you that. I don’t know that he’ll admit to being a trainer, as much as a manager. And he says he can do a lot more on the phone than wasting time coming out and B.S.ing with fellow trainers watching, or not watching, horses going around a circle. He’s a hell of a guy. Very entertaining and he certainly deserves to be acknowledged for his accomplishments in the game.”

While Leatherbury might not be ready to break into a victory dance just yet, he can still sit back and reflect on those accomplishments. Heck, before kicking his feet up, he could turn on some Sinatra.

For a photo gallery of King Leatherbury and Ben’s Cat, click here.