“Family guy” Kendrick Carmouche heating up in the cold 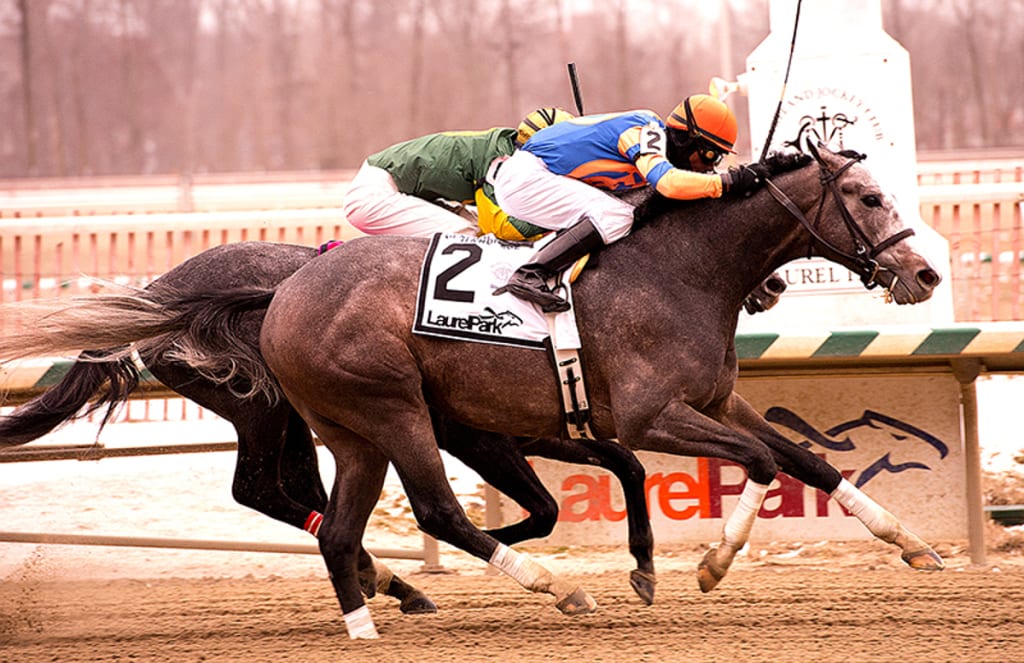 Misconnect and Kendrick Carmouche were up in time to defeat Cutty Shark and take the Grade 3 General George on February 16. Photo by Jim McCue, Maryland Jockey Club.

It’s been a cold, hard winter for both man and beast in the mid-Atlantic region, with unsafe track conditions forcing multiple cancellations at racetracks from New York to Maryland.

But amid the bitter temperatures, jockey Kendrick Carmouche has been red-hot, winning as of February 25 half of his starts at Laurel Park, including two stakes in the last three weeks; five races at Aqueduct Racetrack, including a second-place finish in the Evening Attire Stakes for trainer Todd Pletcher on Sunday, and 11 races at Parx Racing, where he’s booting them home at a 30 percent clip. 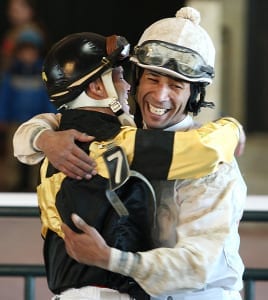 Kendrick Carmouche (right) and John Bisono embraced after dead-heating for the win in the Auld Lang Syne S. at Parx Racing in December 2014. Photo By Bill Denver/EQUI-PHOTO

Carmouche, 30, rides for a number of top New York trainers, including Bruce Levine, for whom he piloted Mike Repole’s Misconnect to win the Gr. 3 General George at Laurel on Feb. 16, and Chad Brown, for whom he rode Covello, Coleman and Doheny Racing Stable’s Majestic Affair in the Frank Whiteley Jr. Stakes on Jan. 29. He’s also the go-to rider for top outfits in Pennsylvania, among them Jonathan Sheppard, John Servis, and Lisa Guerrero.

About this time last year, Carmouche found himself under sunny skies and palm trees in Hallandale, Fla., where he moved his tack for the Gulfstream Park meet. He chose to remain up north this winter, however.

“I decided I’d rather stay here than go to Florida again,” said Carmouche. “I thought if I would ride in New York, I would get better opportunities and it would open more doors for me. This summer, I’m thinking about going to Belmont Park or Saratoga. If I keep going in this direction, and maintain a high winning percentage, I’ll have a shot at riding some better horses.

“I found that, in Florida, you can’t move jocks off good horses,” said Carmouche. “Also, it’s a matter of out of sight, out of mind. I figure if I stayed home (in the mid-Atlantic region), trainers like Pletcher and Brown might keep me on some of their horses.”

Another reason that Carmouche has decided to stay local this winter is that he became homesick, and found himself missing his family too much while in Florida. Carmouche lives with his wife Whitney and two young children in Delaware, near Delaware Park.

“I’m a family guy; my family comes first,” he said. “The separation for four to five months last year was really hard. And I love where I live, because it’s quiet and I’m a country boy at heart.”

Carmouche has ridden 2,592 winners since beginning his career at his hometown track of Delta Downs in 2000, and his mounts have earned more than $5 million in each of the past eight years. He dominated the Parx Racing action from 2008 to 2011, becoming the first jockey to win four consecutive riding crowns, and he won the Parx title again in 2013.

With his resume, it seems only a matter of time before he latches onto a big horse, one that could catapult him into national prominence. He’s certainly proven he has the talent, and is known for his skill and sense of timing aboard turf and synthetic horses. In the 2011 Breeders’ Cup Turf Sprint (Gr. 2), he was third aboard the Tony Dutrow-trained Perfect Officer, while also that year he won the Thoroughbred Club of America Stakes (Gr. 2) at Keeneland with Holiday For Kitten for Wesley Ward and owners Ken and Sarah Ramsey.

From his home in Delaware, Carmouche drives himself up and down the highways of the mid-Atlantic region. It’s not unusual for him to ride a few at Aqueduct and then catch a late mount or two at Parx, or ride early at Parx and then head down I-95 to Laurel Park.

“I like to drive myself,” he said, stating that he preferred not to have someone drive him around. “I have peace of mind and I can think about the business I have that day and what horses I’ll be on.”

Carmouche’s hectic work schedule and the discipline he shows by managing it with help from his agent, John “Kid” Breeden, is paying off this winter. He also uses it to set an example for his children.

“I want to show my kids that being complacent is not good in life,” he said. “If you want something, you can get it, but you have to keep fighting for it. Being a jockey is no different than an office job; you have to work hard to move up. I’m very blessed, grateful and humble that my career has gone well, and very grateful to my family for supporting me.”