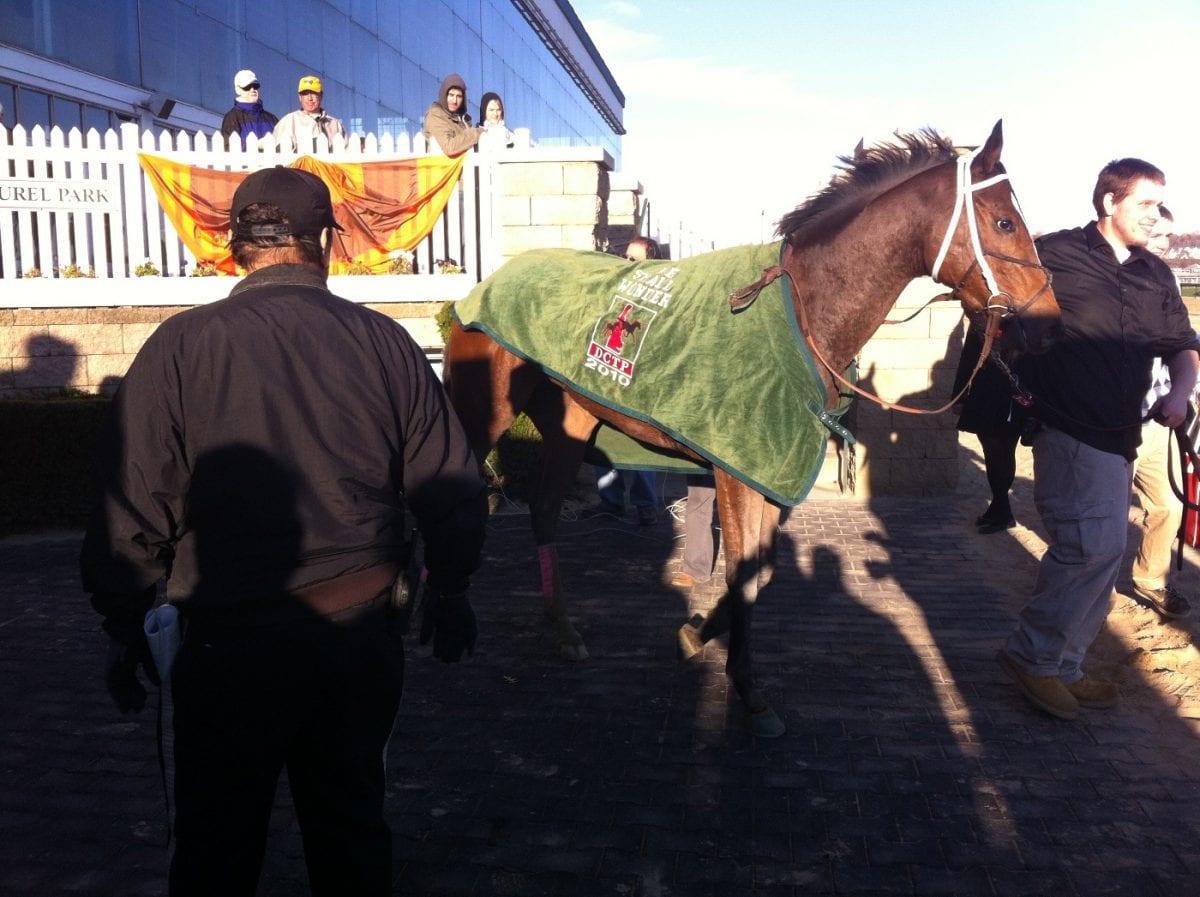 The Jerry Hollendorfer-trained 4-year-old filly arrived at Laurel Wednesday following a cross-country flight from Southern California in a quest for her third straight graded-stakes victory. The daughter of Brother Derek concluded her 2014 season with a half-length victory in the $300,000 La Brea Stakes (G1) at Santa Anita on Dec. 26 before making a victorious 2015 debut in the $200,000 Santa Monica (G2) on Jan. 19. Both stakes victories were achieved at the Barbara Fritchie distance of seven furlongs.

“We liked this race when we saw it on the schedule, because of the distance, which is right now her best distance because we haven’t stretched her out yet, and the time between her last race worked out good,” said Hollendorfer’s long-time assistant Dan Ward, who will be at Laurel to saddle Sam’s Sister. “She’s training very well, so we thought we would try one more time at seven furlongs. There are a couple races down the line – the Humana Distaff and the race over at Keeneland further in the year if all goes well – but it seems like a good opportunity at her best distance.”

Sam’s Sister has won five of six lifetime starts, her lone loss coming on turf.  She launched her career with three straight victories, the first two over Del Mar’s synthetic surface before a dirt triumph at Santa Anita.

“It’s good to find out [how she’ll handle shipping and another surface], and we’ll find out how she handles the cold weather too,” Ward said. “It’s going to be pretty cold, but I think it’s better to be going from warmer to cold than from cooler weather to really hot. The horses don’t seem to respond as well.”

Santa Anita-based Elvis Trujillo is scheduled to make the trip to Laurel to ride Sam’s Sister in the Barbara Fritchie, which will be the eighth race on Saturday’s nine-race program.

Hollendorfer, who owns the Kentucky-bred filly in partnership with Mark DeDomenico and George Todaro, has also shipped Southern Freedom to Laurel for Saturday’s supporting stakes, the $100,000 John B. Campbell Handicap.

Princess Violet is set to make her 2015 debut in the Barbara Fritchie after finishing first or second in seven of eight starts last season.

“I’ve been pointing to this race for three months,” trainer Mike Hushion said.

The New York-bred daughter of Officer is coming off a second-place finish at Aqueduct in the $300,000 Go For Wand Stakes (G3), in which she was nosed out of victory after having to fan eight-wide at the top of the stretch. She previously had dominated state-bred company by 5 ½ lengths in the $250,000 Empire Distaff Handicap and captured an open allowance by four lengths at Belmont Park. The Barry Schwartz 4-year-old homebred has won at distances from six furlongs to 1 1/16 miles.

“At some point you’d like to know what fits her best, but with her, it doesn’t seem to matter much,” Hushion said.

Princess Violet, “a good-sized filly who is very long but well-balanced,” debuted at Gulfstream Park last March, when she lost a photo finish to future graded-stakes winner Size. She went on to break her maiden at Aqueduct and win an allowance at Belmont, both times against state-bred fillies. She made the leap to Grade 1 company in the Mother Goose (G1), finishing second behind Untapable, who went on to win the Breeders’ Cup Distaff (G1) and the Eclipse Award for champion female.

“She proved she belongs with the classiest fillies in the country,” said Hushion, whose filly is scheduled to carry eight pounds fewer than Sam’s Sister.

Jose Ortiz, who has ridden Princess Violet in her last seven starts, has the return mount.

Marty Wolfson-trained Best Behavior, a Gulfstream Park invader, was entered to start in the Barbara Fritchie off sharp recent form that includes a victory in the $110,000 Claiming Crown Glass Slipper on Dec. 6.

The 5-year-old daughter of Into Mischief was claimed by Miller Racing LLC for $62,500 out of an optional claiming allowance at Gulfstream in August. She came back for Wolfson to finish second in the Sky Beauty Stakes, win the Glass Slipper, and finish second behind Wedding Toast in the Miami Shores Handicap at Gulfstream.

Best Behavior, who has been assigned to carry 116 pounds, will be ridden by Edgard Zayas. 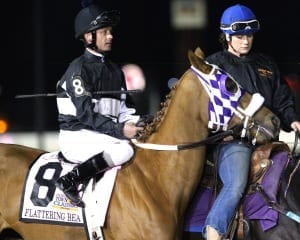 Flattering Bea is a Fritchie longshot. Photo by Coady Photography.

West Point Thoroughbreds’ Toasting is also scheduled to ship from South Florida to make her second start of the year in the Laurel stakes. The Tom Albertrani-trained 5-year-old mare finished a troubled fourth in the Sunshine Millions Distaff at Gulfstream on Jan. 17. The Grade 1 stakes-placed mare, who won the $100,000 Sky Beauty Stakes at Belmont in September, has been assigned 114 pounds and is scheduled to be ridden by Sheldon Russell.

Lady Sabelia is scheduled to make her graded-stakes debut in the Barbara Fritchie after winning five of her last six starts in the Mid-Atlantic region. The Robin Graham-trained 5-year-old mare will enter Saturday’s stakes off three straight victories, including stakes successes in the Willa On the Move and the What a Summer in her last two starts.

Mrs. Frank P. Wright’s homebred has achieved the vast majority of her success at six furlongs, but she won her only start at seven furlongs. After breaking her maiden in October 2013, the daughter of Majestic Warrior captured her stakes debut in the seven-furlong $100,000 Safely Kept a month later.

Horacio Karamanos has the return mount aboard Lady Sabelia, who is slated to carry seven pounds fewer than the highweight.

Expression is set to make her graded-stakes debut Saturday in the aftermath of a pair of solid stakes efforts at Aqueduct. Claimed for $35,000 by owner/trainer Charlton Baker out of her second career start on Jan. 11, 2012, the 6-year-old mare captured the $100,000 Garland of Roses at Aqueduct on Dec. 6 before checking in third in the $100,000 Interborough Stakes.

The daughter of Invasor has earned $374,194 during a career in which she has finished first or second in half of her 26 starts. Wilmer Garcia is set to ride Expression, who has been assigned to carry 115 pounds.

Cam Allard’s Stormy Novel, who finished less than a length behind Expression in a fourth-place finish in the Interborough last time out, is set for a start in the Fritchie. In her next to last start, the 4-year-old daughter of Bernardini won an optional claiming allowance at Laurel Park by five lengths.

Trainer John Servis has named Kendrick Carmouche to ride Stormy Novel, who has been assigned to carry nine fewer pounds than Sam’s Sister.

Before You Know It, Disco Barbie, Flattering Bea and Miss Mischief round out the field.