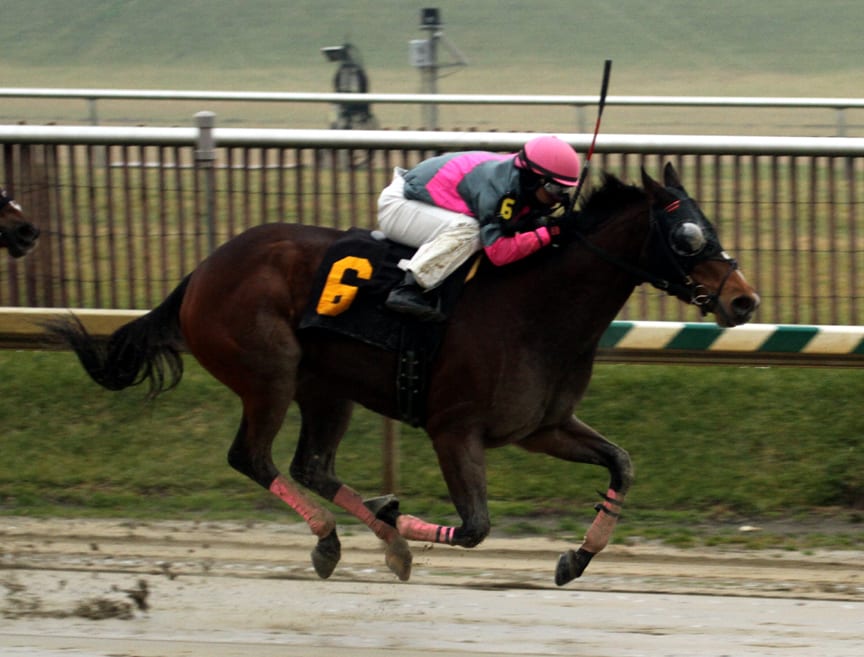 Lady Sabelia takes the What A Summer. She’s entered in the G2 Barbara Fritchie on Saturday. Photo by Laurie Asseo.

Each of three Laurel Park stakes slated for Saturday looks likely to draw a crowded starting gate, if the early entries prove out.

The card, highlighted by the Grade 2, $300,000 Barbara Fritchie Handicap for older fillies and mares, also includes a pair of nine-furlong tests, the $100,000 John B. Campbell Handicap for three-year-olds and up and the $100,000 Maryland Racing Media Stakes for fillies and mares three-years-old and up.  They will be contested as the last three races on the card, with the Fritchie set to be race eight (post time 3:57).

The Fritchie has drawn a salty field, headlined by Sam’s Sister.  The Jerry Hollendorfer trainee, based at Santa Anita, has won a pair of graded events in her six-race career, including the Grade 1 La Brea on the day after Christmas.  With five wins from six starts, she’s earned over $427,000 and figures to get plenty of fan and wagering attention on Saturday.

But the field she’ll face is nothing to sneeze at either.  Local star Lady Sabelia, who has won three straight for trainer Robin Graham, has pointed to this race since December and enters with back-to-back stakes wins.  She, Flattering Bea, and Miss Mischief are all multiple stakes winners; Toasting is a multiple stakes winner who is also graded stakes placed, and stakes winner Classic Point is a nose away from being a graded winner.

All in all, 11 horses are entered in the Fritchie, although two of those, Disco Barbie and Miss Mischief, are also cross-entered in the Maryland Racing Media Stakes.

Each of the other races has also drawn a field of 11 in the early entries.

Nine of the runners entered in the Campbell have won or placed in stakes.  Most prominent on that list is Went the Day Well, the Jimmy Jerkens trainee who won the 2012 Spiral Stakes (G3) at Turfway before running fourth — beaten just 2 1/2 lengths — in that year’s Kentucky Derby.  He followed that effort with a 10th place finish in the Preakness and enters this event off his first win since the Spiral, against allowance foes at Aqueduct.

Though equally full, the Maryland Racing Media field is somewhat less accomplished.  Stakes winners in the lineup include Miss Mischief, Zucchini Flower, South Andros, and Celtic Katie.  None of that group has scored in stakes company at Laurel.